Behind the Work 2.2k Add to collection 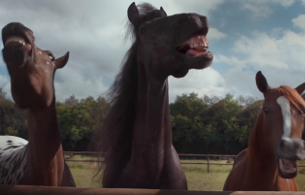 Public parking can cause stress for many a driver. Parking with a trailer? A whole different ballgame. Parking a horsebox in front of an unforgiving group of horses? For the poor bloke in this new Volkswagen ad by Germany agency Grabarz & Partner and Czar director Bart Timmer, complete humiliation. The spot aims to show the virtues of Volkswagen’s new trailer parking assistance and, while doing that, is a genuine giggle fest for both the starring horses and viewer. It’s getting good traction online with over 10 million views and 37,000 shares, so LBB’s Addison Capper needed to know more. He spoke with director Bart and Grabarz & Partner's CCO Ralf Heuel...

The video above may not play in all countries. Please click here to watch the ad on VW website.

LBB> What was the strategic thinking behind this campaign?

RH> The new Tiguan is a tough, cool vehicle. But at the same time crammed with the latest assistance systems. We looked for a way to demonstrate both aspects in an entertaining and, above all, simple manner.

LBB> Bart, why was this a job you wanted to get involved in?

BT> The script had comedy written all over it and I just love making comedy. But reading the story I also realised that this could end up really good or really bad and that’s what excited me the most. Balancing the humour, finding the right tonality, the contagious laughter. I knew it wasn’t going to be an easy one.

LBB> Ralf, why was Bart the right director to bring it to life?

RH> We shoot a lot with Bart, and are very happy to do so. Especially for Volkswagen. Bart manages time and time again to tell humorous stories that really touch the audience. He has incredibly good timing, which is almost the most important thing in comedy. Above all, Bart’s humour is never cynical or gloating. And this was important to us, especially for this project. You need to empathise with the man who cannot park. And not just laugh at him. Additionally, Bart is a perfectionist and knows what CGI can add. He is also simply a really funny and great guy who you can collaborate with perfectly.

LBB> Why did you decide on a comedic approach for the campaign?

RH> The best Volkswagen advertising has always been simple, smart and humorous. For us as a Volkswagen agency this has always been an obligation, but also an incentive. It was important for us not to produce pure slapstick, but a story that can be watched, and which people actually believe. Or want to believe.

LBB> You have to slightly humanise the horses to make the laughs seem more realistic, but obviously they still need to have the personality of a horse! How tricky was it to tow that line?

RH> Right from the outset, we collaborated with the director, Bart, to elaborate specific roles for the horses and develop their characters. The Hero Horse in the middle, a little older and masculine – a wise old stallion, who has seen it all. To the left of him, an inquisitive and slightly saucy mare. To his right,a horse that we dubbed ‘Sleepyhead’ because it always reacts a tiny bit too late. It is the last to come up to the fence and the last to understand that the Tiguan had driven into the yard. The horse in the trailer laughs too, but a little quieter and more subdued, because it does not want any trouble with its owner, of course. The list goes on. We thus knew at the end how each horse has to act, so to speak, to be true to its role. Practical method acting for horses.

BT> People have characteristic laughter, some of which is very contagious. Horses don’t laugh, they neigh and neighing horses don’t necessarily make you smile even though the images look funny. That's what I found out when putting real horse sounds on the images. It sounded very realistic but not funny at all. The moment we put human laughter on the horses I instantly started laughing. To stay closer to real horse sounds I even tried morphing human laughter with horse neighing but that had an alienating effect. After a long process I decided to stick with human laughter. Next step was to find many different characters in voices that resemble the different horses in the commercial. For instance, the big black horse in the start of the story needed a deep manly voice, and to me this was the main character. Once we got this voice right, the rest was easier.

LBB> How did you cast the laughers?

RH> To be quite honest, we recorded an unbelievable number of laughs before we were satisfied.We dragged people from the agency, people from production, comedy voice actors and other actors into the studios. In the meantime, we even tried to convert human laughter into horse laughter using a specially programmed electronic tool. At the end of the day, we relied on our gut feeling and used a mixture of everything. You have to be careful not to over-engineer the humour.

BT> Trial and error. We recorded a huge amount of actors and non-actors in the sound studio. We tried as many different voices as possible. We recorded high laughter, low deep laughter, laughter that sound like a horse, basically the whole range.

LBB> Bart, what kinds of conversations were you having with the laughers / actors?

BT> My main direction for the actors was to try and lose control completely. I believe that contagious laughter only appears when a person has completely lost control in laughing. I probably drove the actors crazy; trying to get them laughing out loud to the moment where they could not stop laughing. It was exhausting but super fun and rewarding.

LBB> How was it for you to work with animals in this comedic way?

BT> On set it was quite hard to feel the comedy. It was a struggle to get the horses in the right positions, get their faces moving in the right directions etc. Luckily we had an amazing horse handler from Spain who has an incredible connection with his horses. It was amazing to see him work and direct the horses. When shooting the actor in the car we started to realise that this might end up a funny commercial. His performance and looks were spot on. It was a joy to direct him.

LBB> How involved were you in the post / animation?

BT> I was in close contact with my post production team BaconX from Copenhagen. They were amazing and we worked together on a day-to-day basis to get the animation of the horses perfect. Their talent and creative input helped me a lot to get to this nice result.

RH> A small tip: it was not the performance of the human actors. There were two major challenges: animating the horses, and in particular the horses’ faces, so that they really looked natural (fantastic job, BaconX, Copenhagen!). And producing the horses’ laughter so that it is infectious and not contrived or annoying (fantastic job, Studio Funk, Hamburg!).

And we also had torrential downpour, etc., during the shoot. The usual thing when you are shooting commercials.

BT> To be honest the whole process was quite tricky. On the shooting day, we had lots of rain and even thunder strikes. It was really hard to find the right contagious laughter for the horses and it wasn’t easy to create the perfect comedic tone in the horse animation. The only way to overcome all this is to keep smiling and keep reminding yourself that the end result will look great and funny.

LBB> It’s been shared a lot online– why do you think people have taken to it so well?

RH> People share things that are useful or entertaining. This ad is both. On top of this, it really is based on truth: everyone who has ever wanted to park a trailer or caravan knows how difficult it is. In this respect, every motorist can empathise with the role of the first man.

BT> I think because laughing can be extremely contagious and seeing laughing horses is pretty unique and surprising.