Behind the Work 458 Add to collection 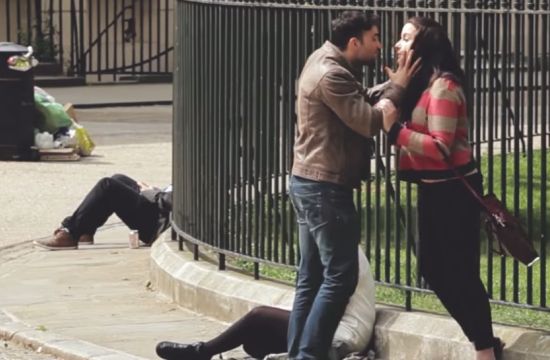 #ViolenceIsViolence, a film that shines a light on female-on-male aggression, hit the net last week in particularly timely fashion. Only a few days before Solange Knowles was filmed attacking her brother-in-law Jay Z and the incident was met by flippancy in the media – adding greater power to this new campaign for charity ManKind. Created by Dare London and produced by Dark Energy, the two-minute spot plays out two mirrored scenarios – one in which a man attacks his female partner and the other where the woman strikes her male partner. The way in which the unsuspecting public react and the impact it has had on viewers have led to the film amassing over 5 million views in less than a week. LBB’s Laura Swinton got the scoop from director David Stoddart about filming a secret film as shocking as this.

LBB> When you first saw the brief from Dare, what was your immediate reaction to it?

DS> Immediately I thought of the great opportunity to work with the actors. I was also really interested to find out what the difference would be in the reaction to a woman being abused in public and a man.

Also, having recently worked with Dare, I knew I would have total support and collaboration. That is essential when you’re not only working on an unscripted piece, but also when the situation could explode at any time!

LBB> What's interesting about the spot is that it starts playing out in such a way that the viewer has an idea about where the film is going, how it's going to play out - and then it totally pulls the rug from under you! How did you achieve that?

DS> It was about mirroring the two situations side by side. We go back in time and at first think it’s the same argument until it quickly develops into the woman abusing the man – but with the images of people intervening for the woman fresh in our minds we see people laughing at the man. There couldn’t be a bigger difference in the way people react. But at the same time we see ourselves in the people reacting and it shocks us.

LBB> How did the actors feel about taking part in such a public and emotionally challenging job, and how did you work with them to inspire such believable performances?

DS> They were naturally nervous as there wasn’t the safety of creating a performance for an audience who know they are watching a work of fiction. We didn’t know what the outcome would be on the day. In a way I think it was really valuable experience for them as actors. I told them beforehand that they should embrace their apprehension and be mercurial as the situation with the public developed.

The day before we spent a few hours improvising. We played games that used various strategies to dominate verbally and physically, then, without warning, I would ask them to swap roles. We built up backstories based on their own experiences and talked about weaknesses the other could exploit in the argument.

LBB> Even though it was a documentary-type shoot involving real passers-by, the film required a very specific reaction from the public - how certain were you that they would react as planned (i.e. ignore the female on male violence)?

DS> We didn't plan anything apart from where the cameras would be and making sure we were ready to step in in case the situation got out of hand. When you're dealing with the public you can’t foresee what might happen. I remember thinking that if no one reacts to the man on woman violence I would have to completely re-imagine the film, but it’s the unknown that makes it exciting and dangerous.

LBB> Where did you shoot the spot and how many times did you need to run through the scenario?

DS> We shot in a park in central London and ran each scenario twice with the public.

DS> We had three cameras. They were all stills cameras shooting video. One was sitting on a bench and two were hidden further away on longer lens.

LBB> Were there any surprises on the day?

DS> The whole thing was a surprise! The people laughing did surprise me – it was at that point you realise just how different our attitude to domestic violence is when men are the victims.