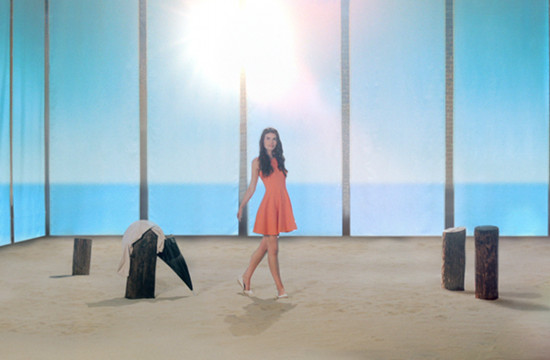 
LBB> What was the brief from the agency and what were your immediate thoughts when you saw it?

LF> It was quite clear to me from the beginning that it was one of those projects I always aspired to be a part of: a simple and strong idea that can only get better with a good execution. I have to give props to the creatives at the M&C Saatchi for coming up with the brilliant concept.

LBB> What factors appealed to you?

LF> The idea of creating a stylized and abstract world and knowing that the concept was strong. The challenge was going to be creating some kind of arc, a progression that would bring the viewer through the transformation of the world we're in.  Also, in the original script there was a shot where a real pelican would fly into the set and land on one of the wooden stumps, so that was quite exciting too. Unfortunately the budget didn't allow that particular scene.

LF> There were a few important factors that we felt would make or break the spot. Firstly, we had to find a girl that was gorgeous but could also move gracefully and with spontaneity.  We auditioned quite a few actually. When we finally met Claudia we knew we had found the one.

The second important element to figure out was the balloons. In particular we had to know how the sand would look when they popped. We knew we wanted the sand to ‘explode’, so Eric Archer, the production designer, came up with different mixtures of powders that would react differently when exploding.  We did some tests and ended up using sand mixed with crushed walnut powder. It’s lighter and gave us the ‘explosive cloud’ feeling.

Finally there was the matter of finding the location. I wanted a warehouse that had ‘rustic’ walls that were visible but also retained a sort of abstract space feeling to it.

LBB> How did you manage to capture the aesthetic of the spot? How much was caught on camera and how much was done in post?

LF> The credit for that goes to our awesome DP Jackson Hunt and our post-production captain Bill Pollock. Jackson understood what I needed right away and managed to build and light the set accordingly, in order to create the magic required. I wanted to start the spot with a dark atmosphere and slowly turn it into a bright and sunny moment, so he lit the set from above in a way that we could move freely around and dance with the camera. We also used the smoke machine a lot to help us increase or decrease brightness through the presence of atmosphere – that had to be constantly adjusted, which was a bit tricky! The haze also helped us to give the room a sense of ‘infinity’.

After all of that, Bill did a lot of work in post. He had the difficult task of grading the shots so that they would gradually become brighter and warmer as the spot progressed. This was harder than we thought – after all the spot is a fashion video, so we had to constantly monitor Claudia's skin tone, making sure it came across well on screen, while at the same time making it work with the overall tone of the moment. Throw in the fact that the shoes needed to have the perfect color every time, and there you have a pretty challenging grading situation.

LBB> What camera techniques were used to capture the elements of the slow motion shots?

LF> We used a RED camera shooting at 300fps for the balloon explosion shots. For all of the other shots we used an Alexa, shooting mostly at 48fps, meaning we could have options to play with movement speeds in editing.

LBB> What was the shoot like? What were the most challenging aspects and how did you overcome them?

LF> There were a few challenges. First of all I had never done a ‘dancing’ piece before. I was a bit nervous about having to deal with that, but after a few takes in which Jackson followed Claudia dancing with a handheld camera, I realised that half of the dancing feel was going to be conveyed by the camera itself.

The other big challenge was the blue stripes falling down at the end.  Again, that was a practical trick that no one had ever really done before. There was a bit of trial and error involved, both in the conception stage of how it was going to work and on actual set!