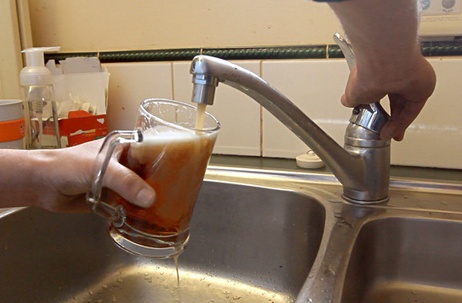 Ask any man what his wildest fantasy is and you can lay a fair wager that beer-running taps features pretty highly. Well that’s exactly what Saatchi & Saatchi, Tui Brewery and five up-for-it mates recently did to their unsuspecting pal’s house as part of the brand’s on-going ‘Always Something Brewing’ campaign. A very envious Addison Capper spoke to Creative Directors Guy Roberts & Corey Chalmers to find out more.

(If you're short on time, be sure to check out the shorter, 90-second version of the film at the bottom of the page.)

LBB> What kind of brief did Tui present you with? They must have been up for having some fun! How did it end up with the idea to plumb the guy's house?

GR&CC> The brief was pretty clear – think of a bold, authentic and ingenious way to get the boys together for a few Tuis, and make the beer central to the action. Tui is New Zealand’s most popular beer and is well known as a hardcase brand with a clever sense of humour. We obviously had lots of different ideas, but we all agreed we’d never seen a house plumbed with beer before, and the smile that appeared on people’s faces when you told them the idea was a sign we had a good one. It was a stunt where everyone wins.

LBB> How long did the project take from idea to conception?

GR&CC> It was part of a wider rebranding of Tui which used the platform we created called ‘Always Something Brewing’. We started the process working closely with our client in February this year so that makes it about seven months.

LBB> What kind of research and planning was involved?

GR&CC> Well the most obvious question was “can you actually plumb a domestic tap with beer?” Luckily we had the brewery’s beer technicians help us out. They raised an eyebrow for a second then they just got on with working it out. There were many fails on the way, but we worked out a few adjustments to get the beer flowing nice and cool, and I can tell you it tasted pretty damn good. Plus all the guys who actually did the prank were tradesmen anyway, so it was never going to fail! Logistically the tough things were finding the right people, getting into their house and getting Russ and Bron [owners of plumbed house] out.

LBB> It's a pretty ballsy project - as a creative did you have any concerns about feasibility?

GR&CC> My favourite saying is “when we eliminate uncertainty, we kill our shot at brilliance”. In New Zealand we just tend to get on with it with a mindset that we’ll eventually make it work. Once we knew we could actually plumb a whole house, it was more a question of how well we could do it. That kept us up at night a bit but we had the perfect crew – client, director, producers and of course the actual guys themselves, who couldn’t be happier to be involved. We had plan A, B, C, D and every other letter available, but we didn’t need any of them. It went perfectly.

LBB> Whose house was plumbed and why was that person chosen?

GR&CC> It was the house of Russ and Bron, who are a fantastic couple and great sports. Russ (or ‘Danger-Russ’ as all his mates call him) is part of a tight group of 20 odd mates who spend every Thursday night at a shed round the back of his house playing poker, so we had the whole set up and crew ready-made. We couldn’t have found more perfect people really. The lynchpin was Sean, who we first contacted through the film company’s connections. He is a major part of that crew of lads, and was also organiser of the day from their end. He chose Russ to be the victim, as Russ himself is quite a prankster - plus Sean had the added benefit of being Russ’s brother. That short-circuited a whole lot of logistical problems.

LBB> How did the actual shoot on the day go? Were there many hairy moments where you were worried it might not work?

GR&CC> The installation took a few hours and we had managed to get Russ and Bron away for a romantic weekend so we knew exactly how much time we had. As I said, the boys are all tradesmen anyway, and they love a good prank, so they found it an absolute pleasure to do. They really did it with relish and you can see it all in the film. No acting, just genuine excitement. The scary thing was not knowing what Russ and Bron would actually do. We really had no idea. They could have gone straight out again, had a fight in the car on the way home, jumped in the shower… we left the tap running a little so they could see something was up. But it was like Sean wrote the script for the action, down to knowing that Russ would put his overalls on and get under the house – so of course we put cameras under there too.

LBB> Strategically, what does this stunt say about Tui and what do you think it'll achieve for it as a brand?

GR&CC> We wanted to reposition Tui as a fresh, clever brand that has the boy’s best interests at heart – a brand where there’s Always Something Brewing. Tui is now a ‘doing’ brand, so what better way to show that than get a bunch of the very guys we’re targetting to pull off an awesome, genuine prank involving beer? We think it’ll drive consideration for the brand, up its brewing credentials, and of course entertain the boys. The amount of media attention and social conversation we’ve seen is certainly proving we’re doing the right things so far. Obviously chatter is nice but it’s essential we convert that to sales, so there’s a whole programme of related promotional activity to follow in the next few months.

GR&CC> There were many challenges every single day but we just trusted the process to achieve what everyone knew was a great idea. We had a brave, ambitious client, a bold idea, a fantastic production company in Katie Millington and Andy Morton at 8Com, and a dogged agency team that felt the fear and did it anyway. Everyone involved is really proud to have been involved in it. Ultimately it’s one chapter in the bigger challenge of continuing the successful story of Tui, New Zealand’s most popular beer.