Your Shot: The Story Behind The Super Bowl Ad That Fox Refused To Air

Behind the Work 383 Add to collection 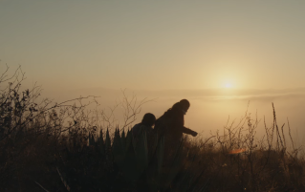 It’s a brave step to advertise during the Super Bowl. At $5 million for 30 seconds of ad space, the Big Game demands big ads. And there was no brand that went bigger this year than 84 Lumber, a building material supplier based out of Pennsylvania.

The company, along with its agency Brunner, made the decision to produce a commercial that was centred around immigration, at a time when the subject couldn’t be a more divisive issue both in the US and wider world. FOX, the official broadcaster of the Super Bowl, wasn’t so keen. It rejected the initial cut, deeming it “too political”, largely due to its featuring of a ‘wall’, a nod to President Trump’s plans for the Mexican-US border.

But it was a message that 84 Lumber believed in – so rather than leave it within the edit room for no one to see, they released a FOX-approved film as more of a teaser for the real thing, which they put online right after the teaser was aired during yesterday’s game. And what a thing it is. A six-minute short, directed by Cole Webley, about a mother and daughter’s intrepid, gruelling journey in search of hope and prosperity. It’s a remarkable piece of filmmaking to support the equally remarkable message. (Make sure you check it out below.)

LBB’s Addison Capper needed to know more. He spoke with Amy Smiler, Director of Marketing at 84 Lumber, and Rob Schapiro, Chief Creative Officer at Brunner, to find out…

LBB> It’s quite common for brands to be involved in political discourse, but not so common to “pick a side”, so to say. Why is it right for 84 Lumber in this case to take a harder line?

Amy> It seems like everything has become a political conversation whether you want it to or not. But we believe America is the land of hope and opportunity for everyone and that goes for all people, no matter who they are, what they believe, or where they are from. And in this country, that should never be a controversial message.

LBB> It’s especially interesting because 84 Lumber is an American company that supplies building materials - it’s these types of industries that Donald Trump so vehemently spoke about during his campaign trail. Did that play any part in the decision to create this campaign?

Amy> You’re right, we’re a 60 year-old, family-owned American company and we were happy to see him take notice of our industry. Especially since we have jobs – good paying jobs that become careers – with training and opportunities for advancement, but unfortunately, not enough people to fill these positions. That’s why we decided to do a Super Bowl ad – to cast a wider net and to shine a spotlight on the entire housing industry, not just us. If President Trump wants to help with that, we’re all for it.

The Fox-approved film which aired:

LBB> Rob, what kind of brief did 84 Lumber initially approach you with? What were you thinking when you first saw it?

Rob> Maggie asked us to position 84 Lumber as a company of opportunity for the next generation of housing industry talent that would keep the company growing. She asked us, “how do we do something that could change the world?” And we delivered. A spot and a campaign that demands attention, serious reflection, spirited dialogue, and most importantly, tells the world who 84 Lumber is and attracts a brand new type of candidate to work and lead at 84 Lumber.

LBB> I’m intrigued to know when work first started on the campaign - immigration has been a hot topic for some time now, but obviously it has really ramped up very recently…

Rob> We have a long-standing relationship with 84 Lumber, but they approached us late last year and told us they wanted to do something BIG, something that would position 84 Lumber as a company of opportunity for everyone. Immigration was certainly topic of conversation then, but has only escalated over the last several weeks, which has helped shine a greater spotlight on the message of the film.

LBB> What reasoning were you given for the rejection of the initial edit? Did you expect any kind of rejection?

Amy> FOX had some concerns about some of the elements, including the ‘wall’, that were initially included. So when they told us they ultimately weren’t going to approve, we were disappointed, but ultimately, it’s their network and their decision.  However, because we believe so strongly in the message, we didn’t want to see it left on the editing room floor. So we aired the spot as it was intended to be seen online immediately after the commercial ran on Sunday, just before halftime.

LBB> It is obviously quite controversial - was that an intention? Why?

Amy> Ignoring the conversation that’s taking place in the media and at every kitchen table in America didn’t seem right. This election has divided the country in a hundred different ways. If we’ve got a platform like the Super Bowl, shouldn’t we be using it to make 84 Lumber, the housing industry, our country – better?

LBB> What kind of reaction have you been seeing?

Amy> When we first came up with the ad last year, we knew it would be a topic of conversation, but we had no idea it would become THE topic of conversation. Overall, we’ve received really positive feedback. However, we knew going in that the message may upset a few people, and that’s ok. That’s just the world we currently live in. Those differences are what make us and this country great. But our customers and employees know our people will always come first, whoever they are, wherever they’re from and whatever they believe.

LBB> Who directed the spot and why did you entrust them with this delicate topic?

Rob> Cole Webley was the first and only choice, really. He’s worked with huge brands before and he’s one of the best storytellers in the business. He’s an American but speaks fluent Spanish and has made several other short films throughout Latin America. He was born to direct this film.

LBB> What are the biggest aims and intentions of this campaign? Despite the political angle, it is overall a recruitment campaign…

Amy> We don’t just sell lumber. We create SHELTER for people. That transcends race, religion, and political orientation. With a platform like this, we had a responsibility to do more than create a commercial. We wanted to create something meaningful that would get people talking about the housing industry in a positive way again. And we’re looking for people who are ready to roll up their sleeves and work hard, no matter who they are. We’re hiring and we’re looking for people who are 84 Lumber material.

Rob> The reality is we live in a very politically charged environment. But I don't think that means brands should stay away from saying anything controversial, though. If everyone else is playing it safe, those that take a risk have an opportunity to stand out even more. We believe if a client is sharing a genuine message they’re passionate about, the risk is usually worth the reward.

Amy> We encourage anyone interested in starting a career at 84 Lumber to visit us online at Journey84.com. We want to hear from you.