Behind the Work 944 Add to collection 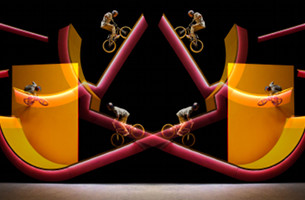 When you watch Red Bull’s ‘Kaleidoscope’ and then discover that the film marked a directorial debut for its director, RSA’s Ben Scott, you have every right to be amazed. The film, created with Sony and featuring BMX rider Kriss Kyle, incorporates a beguiling combination of moving set pieces, optical techniques and never before seen BMX stunts.

However, newly-turned director Ben has spent much of his career as a set designer, and so the mesmerisingly complicated moving set begins to make sense. Everything you see in Kaleidoscope was shot in-camera and, to put it bluntly, the end result is amazing.

We caught up with Ben to find out how he made it happen.

LBB> Was the optical illusion concept more difficult to realise than your previous set designs?

BS> The optical illusion concept wasn’t the difficult thing. I have created both optical and kinetic sets before. That’s why Red Bull contacted me in the first place. Creating optical designs that are also kinetic, that can also be ridden by Kriss on a BMX. That was the really tricky part.

LBB> Did you have a very specific idea in mind? How specific was the brief?

BS> Red Bull were great in letting the creative process happen. The ‘See things differently’ tagline was always there, as was some kind of moving set. Red Bull were very keen on the revolving room. The idea was a very organic one. It became obvious that one big set piece wasn’t going to carry a whole film, and so I came up with the optical illusions, and it just grew from there. Kriss’s riding is just so fluid I knew I had to work to enhance that. To make it appear that he is dancing with the skate park as partner, and not just riding through it, but also to jerk the audience without pulling them out of the moment.

LBB> How did you find the experience of directing for the first time?

BS> Honestly? Absolutely terrifying. But when it came to the shoot, I knew the sets so well having lived through their birth, so to say, that it was actually great fun. I was in very good hands with Alex Heathcote as producer and Marcus Domleo as DOP. Given that absolutely everything was moving – I mean everything: all the set pieces, the rider and the camera – it was quite tricky to build the shot and explain to everyone what was happening. But once we shot it, it all happens in camera, so it was a real treat to see it all come together.

I have been on film sets all of my career, and have seen most things, but nothing really prepares you for an athlete coming to you in the middle of a shooting day and saying, ”you know that 38 foot drop combo, well, I thought I might do it backwards.” Now that’s scary.

LBB> Did you consult with Kriss when designing the set?

BS> Totally, 100 per cent. This wouldn’t have been possible without collaboration from Kriss. Design in my normal work is all about collaboration, and this was no different. I went up to Unit 23 in Dumbarton, and spent a month working with Kriss on the designs. I would show him a drawing and he would look at it and work out what he could do on it. A lot of the time he would say: It looks cool but I can’t ride it. So we would throw that one away and start again. I knew we had something great when Kriss started drawing and I would say: it looks awesome but we can’t build it! Somewhere in the middle of all that we came up with about 14 designs that we went with. There are some that were just beyond us, but who knows... maybe we will get to have another go?

LBB> Some of the tricks on display have never been filmed before. Did Kriss need a lot of takes to land everything?

BS> Kriss is a very special rider. He can look at something quite conceptual and say whether or not he could do it. A lot of what we shot has not been done before. Or if it had, we added another dimension. It’s one thing to flair from a curved rail, it’s quite another to do that trick when the flat bank ramp you are landing on isn’t there, and glides in just when you need it! When it came to the filming, he really pushed himself. He would land stuff pretty quickly but not be happy with it, and just keep going until it was perfect. All that said though, nothing took very long.

LBB> Did you enjoy working with Kriss?

BS> What makes Kriss so special is his genuine kindness and generosity. I think when we first met he was a little skeptical, but was prepared to give it a go. I got the distinct impression he was just humouring me. After we had spent a month on the drawing table all that changed and he embraced it. It was a real pleasure to work with someone at the absolute top of their game, pushing boundaries.

LBB> Was the moving element of the concept particularly difficult?