Your Shot: The Story Behind an Animated Fairy Tale That Saves Lives

Behind the Work 257 Add to collection 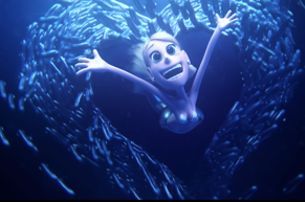 A mermaid pines for the love of a Prince Charming, alone in the depths of the sea. A sailor falls overboard and gives said mermaid hope of a life spent happily ever after. But not all goes to plan in this stunning animation from Publicis Conseil and Wizz Design directors Flying V for the French National Maritime Rescue Organisation. We won’t give away the twist - you’ll have to find that out for yourself by watching below. The film’s production took nine months and the work of 25 graphic designers and 3D animators to complete.

And be sure to check out the making of film, embedded halfway through the interview.

LBB> What kind of brief did SNSM present you with and what were your thoughts when you first saw it?

Lucie & Vincent> The goal of the SNSM is to help and to inform the users about the dangers of the sea. Wearing a lifejacket is a matter of prevention for them. As soon as they asked us to think about making a film about it, we directly thought that we should not shock people but rather approach the problem in a new way, in order to renew it.

LBB> What was your starting point when developing the concept?

Lucie & Vincent> We wanted to talk about the meaning of wearing a lifejacket in a new and different way. So we adopted the point of view of the solution rather than the problem. Once we decided to show how the lifejacket could save lives, we imagined a quirky and original way to show it.

LBB> It’s a very real and serious issue being dealt with here. Why was it right for you to tackle it in a fantastical, fairy tale way? What inspired that approach?

Lucie & Vincent> We all have in mind the myth of the mermaid who tries to attract sailors into the depths. Creating this tale then was a matter of sticking to this imaginary universe, while flipping it on its head. Creating a story in an imaginary world was also the best way to bring some lightness to the topic.

LBB> Where did you look for inspiration when developing the narrative?

Lucie & Vincent> We found inspiration to write this story in our minds. Of course, Ulysses and the legends of sailors who were forced into the abyss by the mermaids were the main part of our backdrop.

LBB? How did you ensure the message really got across, despite the more alternative way of telling it?

Lucie & Vincent> The mermaid myth is famous enough to get an efficient buzz around it. Everyone is thinking that the mermaid will force the sailors into the depths. We knew that using the lifejacket as a disturbing element of the mermaid’s strategy would be efficient and understandable to everyone.

LBB> Why was animation the right medium to get this message across?

Lucie & Vincent> With our story we wanted to reach as many people as possible in order to spread the message efficiently. The animation allowed us to reach adults as well as children. This technique allowed us to bring a poetic dimension to the story.

LBB> Speaking of animation – Flying V, why was this a project you were keen to get involved in?

Flying V> For many reasons actually. First  - and mainly – it was because we were super excited about making a film with proper storytelling and characters providing emotions. There was no format or duration limitation. We can't deny the technical challenge was a part of the motivation too; we had the whole team at Fix Studio / Quad Group to achieve high-end CG. When we started working on the film, we already knew it was a good opportunity to make something great.

LBB> As I understand it, this film marks a change in technique from much of your previous commercial work. Can you tell us about that? Which tricks and techniques did you use?

Flying V> Actually it's more a return to our roots than a change. We studied CG animation for four years in France, learning most of the aspects of 3D movies (animation, rendering, etc.). When we started working as directors we've never been like "let's make 2D animation, 3D sucks!" It's just that we wanted to do films. At some point in our career, more and more traditional animation or motion design kind of projects were coming to us and we're glad we did them. We've always used 3D graphics in our movies but in such a way that you couldn't notice it. The main change from our perspective is more about making a character driven story with a short film feel instead of a commercial. It has become rarer and rarer in this business. The other change is that we're used to working with small teams, making a lot of things by ourselves. With this it was the first time we had to deal with a dozen CG artists and just focus on directing and designs.

LBB> Where did you look for inspiration with regards to the character design?

Flying V> We felt like we needed something unexpected, as far away as we could go from the classic Disney type character design. We wanted to translate this new wave of 2D cartoons in 3D, things like Adventure Time or The Amazing World of Gumball. It happens that we're good friends with the talented William Laborie who used to be a character designer on Gumball. We asked him to do his thing without considering the characters were supposed to go to 3D, we just gave him a few indications and let him work his magic. He definitely was the right guy at the right moment.

LBB> How tricky was it when developing the mermaid? After all, she has to appear welcoming and lovely before swiftly becoming sinister and quite frightening…

Flying V> We spent quite a lot of time working with William on the mermaid’s expressions. We knew she had to look cute except for that one shot at the end. So we worked specifically on that. It was really important to us because in myths, mermaids are not supposed to be friendly – they drown their prey and eat them. We wanted to have both aspects of this figure, charming but deadly. What we added to the mix is that she's not really aware of how dangerous she is.

LBB> With regards to the overall style and aesthetic, where did you look for inspiration?

Flying V> Everywhere, basically. It's important not to limit yourself to animation references. In the end we spent more time looking for real pictures and films under the sea than animated versions of it. What we wanted was to have a mix of realistic looks on unrealistic shapes.

LBB> The film took nine months to make - I hear it was a true collaboration between Publicis, Wizz and SNSM? Is that right? How closely did you all work together?

Lucie & Vincent> Well, nine months... it's long but when there's no money to do things, we need time to do them. From the beginning to the end, we collaborated hand in hand with directors and production teams. The first step was to agree exactly on the script, then step by step, to collaborate together.

LBB> Why were Flying V the right people to bring this story to life?

Lucie & Vincent> Flying V are young talented directors who fell in love with the script and this was a good reason we wanted to work with them. And maybe the main reason.

Flying V> We worked a lot in collaboration with Publicis, especially during the pre-production process. They provided the basic pitch for the film then we made a first draft of the script, sent it back to them, adjusting things, etc. The guys from Publicis gave us plenty of room to incorporate our own ideas. We of course didn't always see things the same way, but that's normal. Everybody was really excited about the project and only wanted the best for it. In the end, the pre-production process was pretty long – four months – going through different story changes, budget cuts, etc.

Lucie & Vincent> There is nothing truly ‘tricky’ when 30 people walk hand in hand for nine months because they have the same goal. As soon as there is a difficulty, it becomes a solution thanks to the goodwill of everyone.

Flying V> Most of the challenges we had were technical ones. A lot of things were really challenging to make, like realistic water, or having a mermaid in every shot with her hair constantly waving. It took a very long series of tests to achieve the perfect look.

Check out the directors' cut here.