Your Shot: The Rise of the Running Dead 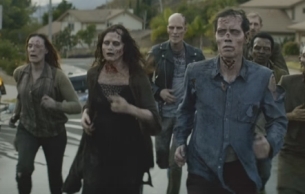 Do zombies run? It’s one of the most hotly contested debates in horror – and Leo Burnett Chicago reckon they’ve got to the truth of the matter with their cinematic new spot for Brooks Running. In it, a shuffling horde – not unlike the undead in the recently-returned hit show The Walking Dead – follow a human into a dilapidated strip mall and… well… we wouldn’t want to give away any spoilers.

The running shoe brand wanted to convey the transformative power of running and knew that to reach new potential customers they’d have to rely on creativity. In fact, the CEO of Brooks Running was so enthused by the creative from Leo Burnett that he even volunteered himself as one of the zombies.

LBB> ‘Rundead’ tackles that most contentious part of zombie lore: do zombies run? It’s something zombie enthusiasts have real heated debates about (I know, I’ve been caught in the crossfire plenty of times!) – why did you want to ‘go there’?

JW> This is probably only debated because seldom do zombies have the appropriate footwear. We found that once you give zombies proper running shoes - Brooks of course - they quickly discover the joy of running.

LBB> And what was the strategic starting point for the campaign? What was the insight that led to ‘zombies’?

DL> Brooks believes in the transformative power of the Run and that running can change a day, a life, the world. (They even capitalise the ‘R’ to signify its importance.) As stories go, the journey from death to life is a pretty compelling one.

LBB> It’s Brooks’ first ever TV commercial – why was now the right time for them to hit TV? And why was it important to debut with such a daring spot? What was the brief that they came to you with?

DL> Brooks makes great shoes and runners love them. But not enough people are aware of the brand, so when people begin running they might default to a known shoe brand – like Nike or UnderArmour – rather than an authentic running shoe like Brooks. Our job is to let more people know what Brooks stands for while still retaining the brand’s authenticity. And Brooks doesn’t have massive media budgets so being brave was a conscious and strategic choice.

LBB> The appetite for all things zombie doesn’t seem to be dying away, and The Walking Dead, which has just returned, is as popular as it’s ever been. How concerned were you about keeping zombies fresh and finding an original approach to the popular monsters?

JW> Keeping zombies - as a genre - fresh was definitely a priority. We liked the idea of zombies as sympathetic characters, who could evolve and even become likeable.

LBB> I love the fact that you got Brooks CEO James M Weber to get involved as a zombie! How did that piece of casting come about – was it his idea? And what’s it like to have your client as one of the undead horde?

DL> It was the client’s idea. They wanted to be part of it and we love them for their enthusiasm and fearless spirit. It’s not just a good way to do business, it’s a good way to live.

LBB> What I loved about the film is that it’s really about the long game and keeps you guessing until the end, rather than giving away the punchline and the ‘why’ right at the beginning. I guess in the world of shrinking attention spans it’s tempting to give everything away up front, but you put faith in storytelling and intrigue to keep viewers hooked… why was that the best way to structure it?

JW> We thought it was important that the viewer take a little journey with the zombies. That there was a gradual transformation from undead to joyful runner. If the zombies had put on their running shoes and instantly turned into accomplished runners we think it would have been less relatable to runners.

LBB> From a narrative point of view there’s a clever switcheroo where at first we might be expected to relate to the survivors but it becomes apparent that actually we might identify more with the zombies (creaking joints and all!). How did you go about walking the line between realistic, scary monsters and creating zombies that the audience might eventually identify with?

DL> It was important to make cinematic, Hollywood-level zombies rather than loveable ad zombies. When they start off in a nasty place, it draws you in and makes their transformation much more believable. The actors were fantastic and our director Bjorn Ruhmann was thoughtful about evolving their facial expressions and showing their progress from stumbling undead to happy, clear-eyed runners.

LBB> You worked with Dominie Till, who has worked on the likes of Lord of the Rings. What was it like working with someone who has created such memorable movie monsters and what did she bring to the project?

JW> She brought us great looking zombies. With all of the zombie content available now, we couldn’t afford to have anything less than authentic, feature-film level zombies. Halloween costume-looking zombies would have blown the authenticity of the idea.

LBB> From a production point of view, what were the main challenges and how did you overcome them?

DL> We kept a careful eye on the weather and arranged the shooting schedule appropriately. Starting on a grey, rainy day and ending in sunshine gave us the optimistic ending we were looking for.

LBB> Where did the shoot take place and why was that the best location? And how did you go about turning it into a post-apocalyptic wasteland?

JW> The opening setting was a vacant strip mall in North Hollywood. The set designer did a great job of making the mall feel and look eerily empty, destroyed. The ending took place in a neighbourhood and the outerlying mountains of the San Bernadino Valley.

LBB> What are your best memories of the shoot?

DL> The first shot, shooting the end scene on the top of a mountain as the sun rose above the valley.

LBB> Why was Bjorn Ruhmann the right director for the job? What did he bring to the script?

JW> Bjorn loves oddball sympathetic characters. He wanted to bring empathy and likeability to the zombie characters. And we think he did a great job doing exactly that.

LBB> The shift in tone is really gradual and all the subtle details, from the grading and cinematography to the acting, the music, all build up gradually so that the change catches the viewer almost by surprise! How did you go about mapping out the different gradients in tone over the course of the story and how did you make sure these elements came together seamlessly?

We worked with the director Bjorn to show the evolution. He devised several different levels of zombie movement - from full zombie walk to half-shuffle and finally normal human running - so the actors knew what stage of the transformation they were in. Our editor Matthew Wood (from the Whitehouse) made the inspiring musical choice of The Nutcracker, which is also a story about transformation and things coming to life. We’re glad the spot surprised you! It’s a rare thing to feel humanity coming from these typically nasty creatures.

Zombies are (were) people too!