Your Shot: The Inspiration Behind Nike and Wieden+Kennedy’s Plea for Equality 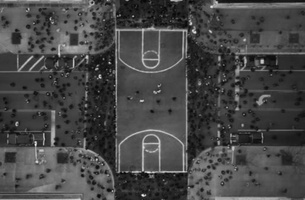 It’s little surprise, given the current political environment in the United States, that campaigns from there and further afield have been awash with related messages. We think one of the most powerful messages to come out of this period is this message of equality from Nike and its long-time agency Wieden+Kennedy Portland. The emotive spot was directed by Prettybird’s Melina Matsoukas and features a host of sports stars, including Kevin Durant and LeBron James, encouraging viewers to take the fairness and respect offered in sport and translate them into everyday life. White paint lines, an image synonymous with sport, is an ever-lasting image during the film.

LBB> It’s a big message for a brand of Nike’s size to give off. And despite it being common for brands to be involved in political discourse, it’s not so common for one to ‘pick sides’, so to say. This doesn’t explicitly do that, but it’s clear what the message is aimed at. Why was it right for Nike to release this and make that statement?

Alex Lopez> History shows that sport has the power to change the world. Together with its athletes, employees and partners, Nike is raising its voice and using the power of sport to stand up for the value of equality.

As part of this effort, Nike is committing $5 million in 2017 to numerous organisations that advance equality in communities across the U.S., including two new partners. PeacePlayers International and MENTOR – both leading organisations engaged in building stronger communities by creating opportunities for youth.

AL> No. Nike has a long history of using its voice to speak out on causes important to its athletes and employees. Diversity and inclusion are values that matter deeply to them.

For example, for the past year Nike has been talking and listening to its employees to understand how they feel about the state of our communities and what Nike could do to contribute.

Mark Parker made an all company statement back in the summer of 2016, and from that point on we felt that it would be powerful for Nike to stand behind their athletes who were also standing up and speaking out against racial injustice and discrimination.

LBB> I love the white paint reference that runs through the film - it’s an image that’s so synonymous with sport, but almost ironically it’s usually used to keep competitors apart / out of a certain space. Tell us about the inspiration behind that.

AL> Early on in the process we were thinking about how sport is a refuge for people. Sport, while not perfect, is based on fairness, mutual respect and it creates camaraderie no matter who you are – which doesn’t exist so clearly in the world once you cross the boundaries of the playing field. Those lines from the field of play offered a powerful symbol, and we felt that we could take those values beyond it.

LBB> Why was Melina Matsoukas perfect to helm this spot?

AL> We wanted a director who could bring their own experience to the project. Melina’s background and sensibilities were perfect for this. Once we spoke to her about the project there was never any doubt that she was the perfect choice.

LBB> Why is the film in black and white?

AL> We shot on 35mm black and white for two reasons. Firstly, the high contrast would help the graphic contrast of the painted lines. Secondly, using black and white helped elevate the message of the film.

LBB> What kind of reaction have you been seeing since this was released?

AL> We've seen an emphatic response to the message. Our broadcast launch in the GRAMMYs really helped ignite a national conversation and we're seeing that get carried throughout social. In 24 hours, we've garnered over 40 million views across TV and digital with engagement rates on twitter more than two-times Nike averages.

LBB> What were the trickiest components when developing this campaign and how did you overcome them?

AL> The toughest part was the production schedule. Once we had the GRAMMYs media date locked we had to prep and shoot a multiple city shoot, edit and finish the film in less than five weeks from start to finish. This was always a passion project for everyone involved but the intense production schedule only made us more determined.

AL> It’s great to see the campaign getting lots of traction. It’s a simple message, that even in 2017 needs to be heard.