Maya Angelou and Beth Ditto are among the many smart touches in the newly-launched campaign from Sport England and FCB Inferno, writes LBB’s Laura Swinton 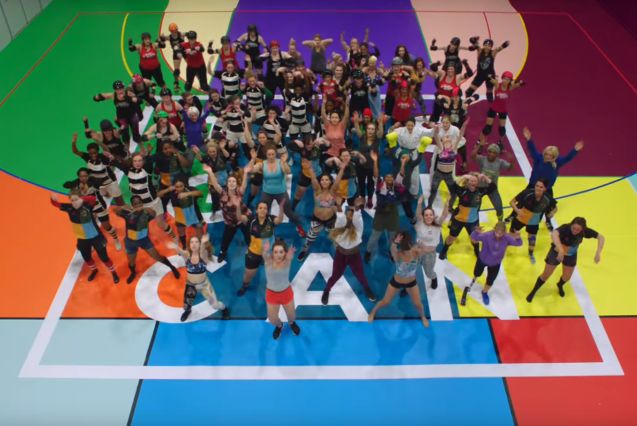 If you want to help women overcome their anxieties and embrace the sheer joy of being, of moving, of the strength of their bodies and characters, then Maya Angelou’s poem ‘Phenomenal Woman’ is not a bad place to start.

And so, as Sport England and FCB Inferno launch the new campaign film for their successful ‘This Girl Can’ movement, Dr Angelou’s warm, rhythmic voice is the central, rallying call. The late poet’s estate granted use of an original recording, in which she celebrates ‘the swing in my waist, and the joy in my feet’. For a campaign that’s all about encouraging women to take part in sport without the usual recourse to guilt-tripping and judgement, these words ring true. In order to help these words sing out, a specially composed track has been created in collaboration with Beth Ditto – a ‘vessel’ for her words.

From the inclusion of Maya Angelou to the surprising array of popular and obscure sports featured, a lot of thought has gone into the second wave of This Girl Can. For a reason. The first wave of the campaign launched in 2015 to the fearless strains of Missy Elliott, and marked a huge change in tone and approach for a public health campaign in that it acknowledged the barriers to exercise that many women face and forewent the traditional guilt tripping and lecturing that one often sees. With insight at the heart of the strategy and a relatable, humorous execution, the campaign made waves, spreading to over 100 countries and shrinking the exercise gap between men and women to the smallest it has been. With lots of work still to do and the success of the original campaign acting as a benchmark, the team faced a massive challenge to deepen and broaden This Girl Can.

“We had a brilliant success with the first campaign and since we’ve been off air I think that every day there are a thousand tweets mentioning the ‘This Girl Can’ hashtag", says Sharon Jiggins, managing director at FCB Inferno. “We know that it’s stayed with the public and the gender gap has been reducing and has never been lower, which is absolutely fantastic, however there is a long way to go, which is why we needed to do another phase of the campaign.”

This time around, the team had the added benefit of two years’ worth of feedback and online conversation to draw from, in order to refine the strategy and ensure that it was based on razor-sharp insight.

According to Lisa O’Keefe, director of insight at Sport England, there were five key observations that drove the tone and message of the new campaign. The first was that fear of judgement doesn’t go away and that even women who regularly exercise are often ‘managing’ that anxiety – for example by carefully selecting the environment in which they choose to exercise, or following trusted instructors if they move their classes to new locations.

The second was that, simply, building new habits is not an easy thing to do – and that inevitable breaks or hiccups can engender guilt and reluctance to re-engage. “We don’t just wake up the first of January and think ‘that’s it’ and start running every day. Life’s not like that,” says Lisa. “Of course, three or four days in and something happens. Today Storm Doris stopped me running. For a lot of people these breaks can absolutely break that routine.

“And what happens quite quickly is we get down on ourselves,” continues Lisa. “There’s this expectation that you’ll find sport and you’ll love it and you’ll be transformed, it’s not like that and we want to be really honest about that.”

The third insight behind the campaign was that the ‘fear of judgement’ doesn’t automatically disappear as women get older – but it often takes a different form. The first wave of the campaign was targeted at the 14-40 range but this time around Sport England is broadening its reach to the over 60s. According to research, among older women anxieties tend to revolve around health concerns, the fact that their bodies may not be as agile or that they may be prone to injury.

“As we talk more about health concerns and the way in which exercise can help with health conditions, actually that can create a bit of exercise guilt. It’s not intentioned but it’s there. Again we need to be aware of that,” says Lisa, of the challenges of balancing the message of the campaign.

As for the fourth driver, the team found that their decision to street cast and include a range of women in the first campaign had been an effective approach. Women they spoke to told them that it was easier to envision themselves in the place of those exercising on screen.

And the final key insight was that one particular element of the original was even more impactful than they had original imagined.

“We didn’t really think of this one, it came through in the evaluation, but for many of our women who we’re targeting in this campaign, they may not have been active since they were at school,” reveals Lisa. “When they think about sport and exercise they think of a product or an experience that’s dated. They also tend to think about it through the lens of traditional sport they played at school. And what we found is what the campaign is doing is opening our audience’s eyes to the sheer breadth of activities out there.”

One example of this, says Sharon, is the inclusion of roller derby. “This time round we’ve got our community to help us and they were incredibly helpful. We have been monitoring all the conversations going on and spotting all the sports and activities that garnered the most interest and create the most conversations. Roller derby was one of those sports that came through loud and clear. And what’s interesting about roller derby is that it’s not something that you do at school. It’s something that you can fall into because you know someone who’s tried it out and says ‘this is a giggle’.”

All that insight means that the campaign is incredibly nuanced. It speaks to the different challenges and changes that women face throughout their life when it comes to exercise – whether that’s being a young girl who’s the only female in a martial arts class or a new mum who doesn’t know what to do with the baby as she exercises or an older lady who’s recovering from health issues or a woman returning to running after losing a limb.

The final campaign film was directed by Kim Gehrig, who also shot the 2015 spot, and was produced by Somesuch. With 123 women to coordinate, it was certainly a massive undertaking, but as with the first film, Kim’s eye for detail means that there are plenty of small but resonant human details that shine through. Accompanying the main film, there’s a series of 12 content films, produced in house at FCB Inferno.

The online community also played an integral role in building momentum ahead of the film’s release. The app was reactivated and all community members were alerted that the new campaign was coming – and user generated digital posters have already gone live.

As with the original campaign, this one is determinedly non-judgemental. While not every woman finds engaging in exercise and sport challenging, many do and it’s totally understandable. Every social media post is scrutinised to ensure that the tone is just right.

“We recognise that, yeah, some people are sporty and find it dead easy and ping out of bed in the morning and go for a run and go for another in the evening and don’t even break a sweat… they are the few not the many,” says Lisa. “For the vast majority of us it’s really hard work. We recognise that and our challenge through campaigns like this and all of the work we do is to say to people, ‘we get it. What can we do to make it easier for you to find opportunities and environments that work?’.”

And that positive, supportive approach is really working. Lisa and the Sport England team have worked with counterparts in equivalent organisation in places like Canada, Japan and Australia to help share what they’ve learned through This Girl Can. And it should be noted too that while the campaign specifically targets women as they’re far less likely to engage with sport and exercise than men, many of the anxieties and insights picked up on by the team have been resonant with men too. With this new wave of the campaign, Sport England is hoping to reach a broader audience both within England and internationally. And we reckon they most certainly can.