Behind the Work 915 Add to collection 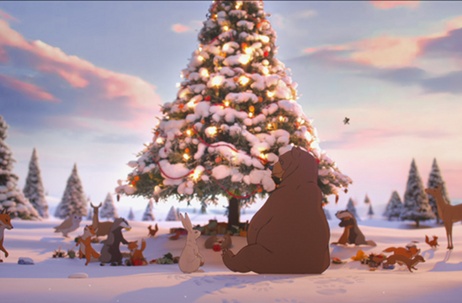 ‘The Bear & The Hare’ is a heart-warming tale of friendship at Christmas that has been sweeping LBB newsfeeds since its release last Friday; even from people who work in the real world. It features never-done-before handcrafted animation from Blinkink and Hornet and a final story that it took agency adam&eveDDB more than 20 attempts to perfect – a completely worth the labour of love, as We Are Social research recently showed.

It’s a spot that carries on the now well-established tradition of John Lewis and adam&eveDDB Christmas ads – and they’re not the only long-term partners who brought the spot to life. There’s the Blink relationship – the past two years have seen Dougal Wilson direct, though this time the honour fell to Elliot Dear and Yves Geleyn. It’s the third time that Factory have worked on a John Lewis Christmas ad and they – led by senior engineer Sam Robson – spent months testing out different ways of recreating the sounds of the forest.

LBB> What kind of brief did John Lewis initially approach you with and what were your immediate thoughts?

AM&LS> John Lewis has always stood for thoughtful gifting; if you know the person, you will find the perfect gift. We started to think about what would be the best Christmas gift and began discussing what it would be like if you'd never seen Christmas and were given the opportunity to experience it for the first time.

LBB> How long did it take from idea to conception?

AM&LS> We were briefed in February, the idea was first presented in early March and production started around April, all the way up until 3 days before its TV launch.

LBB> At what point was it decided that the spot would be an animation and why?

AM&LS> When we knew the story was going to involve animals we started to think about animation and the possibilities with those techniques; it felt different for John Lewis yet very relevant to the story and therefore right for this spot.

LBB> What sources inspired the style of animation used?

AM&LS> We were taken with the idea of it looking handcrafted and the best examples of this style are the early Disney films that we all grew up with. Hugely emotional, perfectly imperfect and hand-drawn as opposed to computer generated.

LBB> Why were the guys at blinkink and Hornet the right team to rely on to ensure the spot came out perfectly? And what were they like to work with?

AM&LS> We always wanted something more than just re-doing what had been achieved so perfectly in the 50s and 60s. We started to think how we might take these traditional techniques and combine them with the latest animation techniques to create something fresh. Blink and Hornet then had the great idea of bringing 2D hand drawn characters to life in 3D model-made sets using stop-motion animation. Working with Blinkink was an absolute pleasure. They are extremely collaborative yet retain their genuine passion for the craft of animation.

LBB> Why did you choose to use Lily Allen's cover of 'Somewhere Only We Know' by Keane as the film's soundtrack?

AM&LS> We started off like we always do searching for the right track. ‘Somewhere Only We Know’ stood apart from the rest because the tune and lyrics seemed to work so well with the visuals. We chose Lily because we loved her moving interpretation of the song.

LBB> adam&eveDDB and John Lewis’ history is a lucrative one - why do you think the relationship is so successful?

AM&LS> The relationship is very open and collaborative.  This trust has been built up over the years and it allows us to create great work.

LBB> How does working on a Christmas brief differ from an out-of-season one? Do you feel any more pressure?

AM&LS> Working on the next John Lewis Christmas ad is very exciting. The reaction from the public to previous years has always taken us a bit by surprise, but working on a campaign with so much interest is part of the excitement of the brief.

LBB> What were the trickiest parts during conception and how did you overcome them?

AM&LS> The first hurdle was to get the story as tight as possible. We wrote more than 20 versions of the idea before deciding on the final version. The second challenge was to get the animation technique right. Having never been done before, there was a bit of experimentation. The last challenge was the music, purely because of its subjective nature. Everyone has a different opinion about music. But once again, collaboration and instinct meant that our lovely music guru Abi Leland helped us get the best result possible.