Your Shot: Such Stuff As Dreams Are Made On

Behind the Work 918 Add to collection

Mother, MJZ and MPC on explain how they used skydivers and stunts to create dreamy new IKEA spot 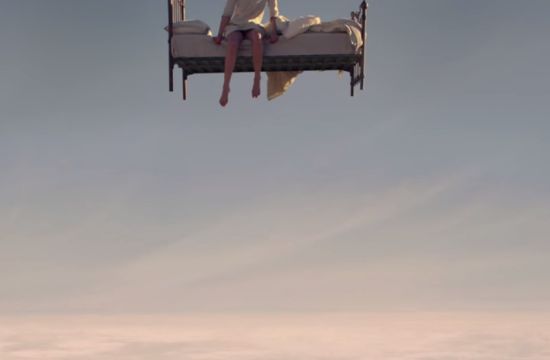 It’s hard to decide whether Mother London’s IKEA ‘Beds’ is more beautiful or terrifying – it all depends how often you’ve had a peaceful night’s sleep interrupted by the sudden realisation that you’re plummeting through the air. It’s better to just sit back and watch as the protagonist falls blissfully through the clouds, until landing in that holiest of places: her own bed. What does make the Juan Cabral-directed film more frightening, though, is the fact that the dreamy drop isn’t just a post production feat. Instead, the team flew skydivers through the air and suspended beds from skyscrapers and cranes in a production feat that must have caused a few sleepless nights. LBB’s Addison Capper spoke with Mother creative team Caio Giannella and Diego Cardoso de Oliveira, MJZ producer Stephen Johnson, and MPC 2D Creative Director Bill McNamara to get the full story.

LBB> What was the brief like from IKEA and what your thoughts when you first saw it?

CG&DC> I would love to say the brief was incredibly simple and single-minded. But the reality couldn’t be further from that. IKEA asked us to demonstrate the importance of the bedroom and bathroom to the everyday.

To be honest our first reaction wasn’t the best one. But after banging our heads against the wall for hours on end, we decided to divide the brief and use different media to tackle different parts of it - then things became a bit simpler. For the film, we obviously focus on the bed.

LBB> What were the key insights that drove the 'there's no bed like home' concept?

CD&GC> We sleep in a million different places in our lives. Beds of all kinds, shapes and forms. Fancy hotel beds, single mattresses on the floor, sofa beds, airplane seats, camping tents and so on. But the truth is, nothing beats the feeling of closing our eyes and falling asleep in our own house. It’s where we feel safe and can truly rest. No wonder we can’t wait to get back home after a long trip. Hence: There’s no bed like home.

LBB> Prunella Scales' voiceover seems to fit perfectly. Why did you feel she was right to narrate the spot?

CD&GC> The decision was made purely on her voice. We were searching for an older British woman with a good voice and who could read Shakespeare. We searched and searched until we found the voice we wanted. The fact that Diego and I are Brazilians and were not really aware of who she was probably contributed a lot to our choice.

LBB> Why was Juan Cabral the perfect man to shoot the spot and what did he bring to the final production?

CD&GC> Juan was amazing throughout the project and his level of commitment to the project was inspiring. After we sold his treatment we had weekly conversations with him in which we would bounce ideas off each other. He kept pushing us and we kept pushing him. I think the script was solid but he really helped to take it to the next level.

CD&GC> Doing everything in camera was a massive challenge. It puts a lot of pressure on everyone. We only had three days to get everything we needed and all the stunts were really time consuming. You need to be on it all the time and there isn’t a lot of room to try things. But I’m glad we did it.

LBB> What were your thoughts when you first laid eyes on the brief?

SJ> The ambition of the idea and the way Juan elevated the concept put it out of reach of normal advertising. It made it something very different and special.

LBB> How was the shoot in general?

SJ> The main unit was shot in three days, with an additional skydiving unit and aerial shoot for the cloud footage. Each shot was done for real and MPC removed rigging and wires, and replaced skies. The first day we shot in the countryside at a place that gave us a clear horizon - mostly against sky. Day two was in downtown Johannesburg. We had a 68 metre tall crane, the girl and the camera on a cable rig falling against a skyscraper, and an airbag drop against another building. Day three had a ground unit filming more elements against the sky, such as the traveller system, the boy and the dog. Then we moved inside the studio for the apartment scene. In each location we suspended the beds that the actress interacted with.

It was very tight, overall. We had three weeks of prep, three days shooting, one week edit and three post.

There were a lot of highlights, though. We achieved huge stunts on top of skyscrapers and dangling from cranes. Everywhere we went there would be a crowd of locals watching what we were doing.

SJ> The biggest challenge was realising as much as possible in camera and achieving Juan’s vision. This was an extremely ambitious shoot and we reached all of the safety and practical limitations very quickly. We worked closely with MPC who helped fill in where the practical was left behind.

LBB> What kind of brief were you initially presented with and what were your immediate thoughts when you saw it?

BM> When we first saw the boards and Juan’s treatment we knew this spot was going to be something special. The challenge was to get as much as possible in-camera, which was going to be tricky with given the setting was thousands of feet above the earth! We had a very close collaboration with Juan and the team to work out the best way to achieve his vision.

BM> We started concept work for each scene very early on. In doing this we looked at a huge variety of cloud formations, and how they look from different angles - especially the bizarre view from above that you get looking out the window of a plane. Most of the cloud landscapes are matte paintings, so it was important to ensure they were realistic early on.

BM> We were involved from the pre-production stage. For a number of the wide shots, including the one with multiple floating beds, we needed to recreate the beds in CG. Our VFX supervisor Jim Radford attended the shoot, sending reference footage of the beds back to the MPC team, so we could start work straight away. The huge number of green screen shots, rig removal and compositing that was required meant it was imperative to involve us early on.

LBB> How much involvement did Juan and Mother have in the VFX process?

BM> Juan was involved in the whole process and worked closely with us throughout. We went back and forward and shared early work for every single shot. He even attended the last 32-hour session when we were applying the finishing touches all the way to the play out! The guys from Mother had a really unique concept, and in terms of the VFX work they trusted us completely to bring this to life.

LBB> What were the biggest challenges you faced and how did you overcome them?

BM> There was not a single cloud in the sky during the main shoot, so we had to populate every shot with realistic looking clouds.

Another big challenge was taking all the different techniques and transforming them into one coherent film. For the scenes that used a skydiver, we had to make the actress look like she was falling so the parachute was hand-painted out from the shots.

When she was falling from the crane she was attached to wires, so we had to match the speed of her falling to the other shots. And when the beds were shot on the ground - for example the staircase shot - we had to add movement to the sheets by taking elements of flapping sheets and adding them to the beds, while also taking the static beds and animating them as if they were floating in the sky.

Every shot involved a huge amount of craft in order to bring the sequence together.

video
Ikea Beds - Making of
view more - Behind the Work