Behind the Work 343 Add to collection

Dörte Spengler-Ahrens, CCO at Jung von Matt/Elbe, on crafting this smart browser add-on and app for the stationary brand 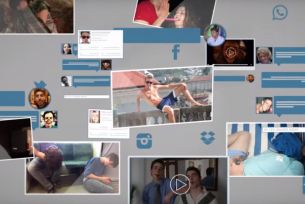 The most commonly told lies on the Internet are: “I have read the terms and conditions” and “I agree to them”. And near enough everyone tells these fibs when they sign up to a new platform on the web. We make those lies because terms and conditions are long, boring, black, white and downright impossible to decipher. That is, until now.  German agency Jung von Matt created a browser plug-in and phone app called ‘TrueColours’ that may well be the answer to our legal headaches.

TrueColours highlights the critical sections in order for users to recognise the dangers embedded within terms and conditions. Fittingly, the client is STABILO, the stationary brand most widely known for its handy highlighters. Germany’s top 20 most popular websites are already covered inside the plug-in, while other sites are being added by users via a crowdsourcing method.

LBB> It’s an interesting concept for a brand that lives mainly in the physical world to launch a digital project that’s really helping its customers. What was the initial brief like from STABILO and how did you end up with the idea for the browser extension?

DS-A> Actually the idea from the team came first – based on pure self-observation. We immediately accept terms and conditions that we would question if we understood what we read. Only because it’s simpler that way. We saw the opportunity to provide a relevant service here, and spark something meaningful for the people. In addition, the idea offered an opportunity to STABILO, as known for its pens, to make a transition into the digital world while also reaching younger target groups. So luckily they were immediately interested to talk to us about the project.

LBB> Why is it fitting for a brand like STABILO to get involved in a project like this? What does it say about the brand?

DS-A> STABILO has always been about simple and clever design that actually helps people in their daily lives. In this regard, TrueColours is a natural extension of their original products: we hope it feels just as simple and striking as using a highlighter in real life. For decades, STABILO highlighters have been used to help structure complex texts in a user-friendly manner and emphasise key passages. TrueColours users do the same – only digitally. It’s also not only one of STABILO’s steps into the digital world. It’s a step forward into a new and exciting direction for the brand.

LBB> What was the research process like? Were there any facts you discovered that particularly surprised you?

DS-A> There were a lot of complex legal issues that we had to resolve. Particularly when it came to the question of giving actual legal advice to people – which we are explicitly not doing! The crowdsourcing approach to True Colours is not only more involving and interesting, but also the best way to make a product like this work in legal terms.

LBB> What types of negative terms and conditions do people often unknowingly agree to?

DS-A> True Colours focuses on privacy policies, because that’s where things are the most troubling. What most users don’t realise is that more often than not, they are giving away the rights to all of their photos, all of the texts they post, and sometimes even telephone numbers and other personal information of their friends!

LBB> What are the effects these could have on a person?

DS-A> Private photos for instance could theoretically be used to promote a service publicly. Private information of third parties (friends) could be passed on to other sites. It’s disturbing if you think about it. Imagine a photo from your vacation as a banner on any website...

LBB> What are you aiming to achieve with TrueColours? Do you think it’s possible to get these companies to change their terms and conditions?

DS-A> We might not change the world, but hopefully we can get as many as people as possible to rethink their habit of just clicking ‘accept’ without a second thought. Of course it would also be great to see one or two companies reconsider their terms and conditions after seeing their assessments on True Colours. I think there’s a high potential for brands to then regain the consumers’ trust, just by simply improving their terms and conditions.

LBB> Who did you work with on the technical side of the campaign?

DS-A> We cooperated with Npire, a company here in Hamburg, Germany. Working closely with a team based in the same city proved to be a good thing, because everyday we encountered new legal or technical difficulties that we could then discuss and solve in quick face-to-face meetings.

DS-A> Certainly all of the legal issues we had to deal with. Luckily we partnered with a law firm that was not only very helpful, but also understood how to protect the original creative idea. There were times when they even made things better than the original concept.

DS-A> It’s always a good thing when a piece of communication offers more than just three or 30 seconds of entertainment. Hopefully TrueColours finds its way into the daily lives of a lot of people. That would not only be great from a brand perspective, it could potentially spark a new conversation about online privacy. One that normal people like you and me might finally be interested to join.