Your Shot: Spilling the Beans on Heinz’s Heart-warming Animated Film 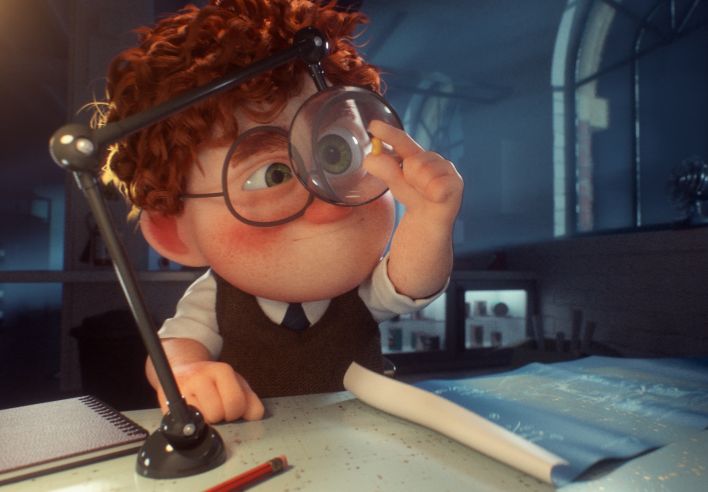 Featuring the titular character, the film follows Geoff through key milestones in his life, from his first day on the job at Heinz to meeting his future wife (all the while exploding a few tins of beans along the way)

LBB’s Liam Smith caught up with Y&R NZ's Tom Paine and Ellen Fromm and director Damon Duncan, hoping to spill the beans on the new film.

LBB> What kind of brief did Heinz present you with and what were your thoughts when you first saw it?

Tom Paine and Ellen Fromm> It was our first project for Heinz Beanz - they briefed us to launch a range of new can sizes (130g, 220g, 300g, 555g) to the Australian market. Communicating in grams is very functional and lacks a human connection, so we drew inspiration from the fact that the cans were each created for a specific demographic and / or meal occasion. We started by redesigning the on-shelf labels to include more colloquial, approachable language. From that, we wrote the story of how these new can sizes came about. And Geoff was born.

LBB> And Damon, what was the initial script like and why was it something you were keen to get involved in?

Damon Duncan> We loved the initial script and were drawn in by the simple telling of a life story which was grand in scope and yet intimate and personal in its approach. By treating Geoff as a real character, it felt like we would be able to inject the narrative with the necessary emotion surrounding the milestone events in his life. Getting a job, meeting his future wife, the birth of his children. Animation scripts don’t often touch on such real world emotions or involve such a cinematic storytelling style so the whole team at Assembly were excited to be able to tackle the creative challenge.

LBB> The animation is spectacular – it’s like watching a Pixar film! Why was animation the right way to tell this story?

TP & EF> Heinz Beanz is one of Australia’s most loved brands, so we set out to create an equally iconic piece of work; a story that would connect with the Australian public and reinforce the product as a pantry staple. Animation gave us the ability to turn a functional product launch into a heart-warming film. It would have been nigh on impossible to achieve the same level of charm via a regular film shoot.

LBB> Where did you look for inspiration with regards to the character design?

DD> We actually started with the products from Heinz themselves. Geoff becomes the Head of Innovation for Baked Beans at Heinz and has been obsessed with beans his whole life. Our initial character exploration saw Geoff as a small, red headed character, a little like the shape of a bean. If you look closely there are a lot of little details that point to his love of beans, the cutout shape of his ears are beans, his nose is bean shaped, all subtle nods to reinforce his character and place within the world we have created. Conversely, we have Sally who is Head of Innovation over at the Spaghetti side of the business. Her hair is long and blonde and she is tall with long, thin arms and legs like Spaghetti. These are the little foundation ideas that we begin with when approaching the character design. The initial ideas and sketches get refined and distilled until we have our characters. We also knew that we wanted to build a rich and detailed 3D world with realistic lighting and texturing for them to live in. This meant we would be utilizing realistic hair and clothing on the characters, another driving factor in their final look and treatment.

LBB> I love all the Easter eggs (Easter beans??) that are going on in the background throughout the film. Any we might’ve missed?

TP & EF> A benefit of using animation is that you’re afforded time to add cute details and subtle quirks that you conceive late in the process, rather than having to capture them all on the day. To be honest, there are probably a few Easter eggs in there that we missed too… the Assembly guys have a meticulous eye for detail and storytelling. It was pretty fun writing in the many bean related things Geoff would have in his house and around his office. As Damon mentioned, even the character designs started with the product, Beanz and Spaghetti, so we had the liberty to go pretty hard on bean jokes and puns. In hindsight, we may have crossed the line at ‘The Beaning of Life’, but by that point we were in too deep.

LBB> How long did it take to complete the campaign?

TP & EF> A busy 10 months from taking the brief to the launch of the film. Within that we had two rounds of market research, giving Assembly and their team just four months to complete the animation. A phenomenal effort.

LBB> Why was Damon Duncan the right director for this project?

TP & EF> Time wasn’t on our side, but luckily the best in the business - Assembly - were. Their skill, attention to detail, and passion for the project helped create a piece of work we’re all incredibly proud of, in a short amount of time. They pulled together a hugely talented team and we couldn’t have asked any more of them. If you (the reader) have an animation job sitting on your desk, we can’t recommend Assembly high enough – they’re truly world-class and superb to work with.

LBB> And Damon, what was it like directing the characters and their emotions without using any dialogue?

DD> It is always challenging directing animation as it is a long process which requires a lot of planning in the execution to ensure a high level of quality is reached in the results. A lot of the work is done in the storyboard and layout phase where the timing and narrative decisions for the piece are made. The animators at Assembly are essentially the actors and we work together in a similar if not quite as spontaneous way, describing character intent and emotion and then blocking through the movement and tone within a particular scene or sequence. The soundtrack also becomes a very important storytelling tool when there is no dialogue.  By pushing and pulling the audience along with the visuals, the score enables us to immerse and compel the viewer, adding another layer to the emotion and our ability to connect to the characters.

LBB> What were the trickiest parts of bringing the world of Geoff to life, and how did you and the team overcome them?

DD> In a project of this scope and size there are always a number of technical challenges that we have to face and overcome. One of the main challenges was how to create stylized yet realistic bean and sauce simulations. A piece of software was created to handle the very complex set of equations that would allow the beans to interact correctly with the sauce and vice versa. On top of that there was also the hair and clothing that needed to be simulated and rendered into the scenes. This brings a level of richness and detail to the world, giving the scenes and the characters within them an almost tactile feel.

TP & EF> Working in partnership with Assembly helped us mitigate problems as they arose. Together, we’d work to find solutions for the plot, character development or altering scenes if they proved to be too technically challenging. One of the trickiest challenges was pretending to understand the animation process, and that animating hair is one of the hardest things to do. Good thing Sally hardly has any hair…

LBB> Are there any plans to expand upon Geoff’s story in the future?

TP & EF> Throughout the script development, we were very conscious of writing charming characters that would have longevity and the potential for interesting backstories. We’ve always joked that Sally’s spaghetti story would follow.