Behind the Work 986 Add to collection 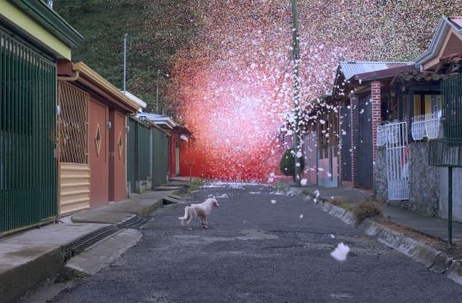 Sony Bravia ads of yesteryear have dished up a bounty of colour explosions and in-your-face luminosity. And McCann London’s latest for the launch of the brand’s new line of ultra HD televisions is no different. It’s big, bold and bright. ‘Four times the detail’ is beautifully captured fresh elegance, despite the chaos – 8million real petals were involved! – surrounded with producing it. Addison Capper spoke with McCann London Co-Presidents and CCOs, Robert Doubal and Laurence Thomson, Creative Arman Naji, and Smuggler Director Jaron Albertin.

LBB> What kind of brief did Sony initially approach you with and what were your immediate thoughts when you saw it?

McCann> The brief was to do something big, visceral and unforgettable – in Sony fashion. And it had to somehow be a metaphor for experiencing the 4K on a non-4K screen. I think ‘F*ck Yea’ would best sum up our collective reaction.

LBB> How long did the project take from idea to conception?

McCann> The whole thing took just over six months. Some good, some bad, but all very memorable and interesting days. Everyone involved took a lot away from it.

LBB> And what kind of research and planning was involved?

McCann> Lots. Finding volcanoes, towns, three plus tonnes of petals and figuring out how to make them behave like lava, and what that would be like. I think we made a lot of it up as we went because we didn’t really have any references to guide us.

LBB> All of the effects were shot in real-life using 8million real and biodegradable petals - why did you decide they needed to be real, as opposed to made in post? How did you and director Jaron Albertin go about capturing those perfectly and what kind of issues did they throw up?

McCann> The petals were beautiful but a pain in the ass. You shot them around and had no idea of anticipating how they’d behave. The slightest breeze or tiniest delay and they did something completely different and you’d have to clean it all up, reset the whole thing and try again. I guess we had a lot of patience and a lot of love for the project so it didn’t discourage us too much. We agreed very early on that everything had to be real because there’s no substitute for that. Anybody could’ve done it in CGI, but then you wouldn’t know if the petals would actually behave like that in each circumstance, which really takes the magic out of it. And you’d never have that feeling when watching it, like ‘wow, they actually did that’. Plus it’s Sony, and Sony only does things for real.

LBB> Why was Jaron the right man for this job?

McCann> Jaron’s work has a very poetic and human feel to it. And even though this was a huge visual thing, we wanted it to have some intimacy as well, which he’s really great at achieving. He also had a very clear vision from the start and that brought a lot of confidence to the whole thing.

LBB> The film takes the viewer to numerous locations - where did shooting take place?

McCann> We went all over Costa Rica, which felt like a free tour-holiday rather than work really. We went to opposite ends of the country to shoot the two volcanoes – one for the flyover, one for its gullies – scaled a mountain, a few towns in between, in the jungle, and a less glamorous open field. Probably definitely leaving a couple locations out.

LBB> Strategically, what do you think this spot will achieve for Sony as a brand?

McCann> Strategically we think the film says, ‘we’re Sony, we’re the only brand capable of doing something this mesmerising because we’re the only brand whose products can actually back it up’. On a bigger brand level we think it’ll capture and continue to retain people’s imaginations, which is really quite an incredible thing for a brand to do. There’s maybe two or three brands that can actually do it.

LBB> What were the biggest challenges you faced and how did you overcome them?

McCann> I guess the biggest challenge was hearing ‘no’ at every turn. ‘No you can’t shoot inside a volcano’, ‘no sorry you’ve already taken all the flowers our country can produce’, ‘no the breakfast buffet is only on until nine’, ‘no blah blah etc.’. You’ve just got to play ignorant and ask again.

LBB> What was it about the initial brief that appealed to you?

JA> Well the first thing that came to mind was the similar Sony campaigns of the past and how their legacy hung over this project.  You could say this idea of Sony’s ‘exploding colour’ has had its time, and from a filmmaker’s standpoint it’s been done before in ways that you can’t really compete with in ‘Balls’ and ‘Paint’. But as soon as I started talking to the agency creatives, I found it refreshing how little they were bothered by that ancestry. Their perspective was, ‘well let’s just make something interesting.  This is Sony’s brand so why not go with it’. They weren’t afraid to delve back into this world and see what else they could find and I think they found a really fresh take on it.

Now rather than being about colour, this is really about detail. Blowing petals out of a volcano is so absurd. It’s fantasy and in no way could it be real.  It’s destructive, but I thought it could also be quite beautiful. This is what grabbed me. This was not just about drawing attention to the techniques involved and making people wonder how it was done – which was definitely the case in ‘Balls’ and ‘Paint’. This idea is more quiet and unselfconscious, and I liked that.  We still felt it was essential to achieve it all practically, and whenever you set yourself a challenge like that people will pick up on it. But it’s not something we draw too much attention to in the film.

LBB> What was the pre-production process like for the ad? How long did it last?

JA> It was tight considering what needed to be done. A few practical effects companies turned us down due to the time constraints during prep (I think we had just over three weeks). The biggest challenge was sourcing the petals - the quantity needed, and the R&D into how they’d work being blasted into the air.  In the end we had 1.5 tonnes of handpicked petals, and 1.5 tonnes of bio petals with soy based colours.  It was very important to Sony – and to all of us - that everything we used was 100% biodegradable.

LBB> You shot all of the effects in real-life using 8million real petals - can you talk us through the logistics of what that involved? What kind of issues did it throw up?

JA> Our effects team, Machine Shop, brought in two tornado fans, four blast cannons, two big air bucket cannons, and numerous smaller air cannons.  We also had this huge 35m x 35m silk covered in petals to achieve a rippling effect.  But it was rainy season in Costa Rica so our biggest enemy was the weather.  Petals are very delicate and to send them flying in a certain direction takes good weather and very little wind.  We had this army of fans and cannons, but nothing works if there is wind blowing in the wrong direction.  A few shots didn’t make the cut because our cameras would be set to follow the petals heading a certain direction just as the wind picked up and blew them the opposite way.

We also learnt that volcanoes have very volatile weather conditions, and they proved virtually impossible to shoot in.  We had wind and weather issues almost everyday. When you are only able to shoot a few shots a day because of setup time and large amounts of petals are getting used up, it can get nerve-racking. But we did what we could to battle the elements and get the film finished.

LBB> How did you manage to capture the aesthetic of the spot?

JA> Going into it, the aesthetic was simply about capturing what was in front of the camera.  If the shot was big enough with lots of petals, it would be exciting to watch - all our effort went into this and what is on screen.  Sometimes we would do a take and say, “well that didn’t look so good, we need to blast more petals, as many as we can.”  Once that bar was set we couldn’t go back.  This had to be shot and delivered on 4k, so the detail in the image was very important, you can see every tiny petal.  It’s ironic because it looks like a pixelated mess on youtube, but seeing it in actual 4k is quite mesmerising.

LBB> The film takes the viewer to numerous locations - where did shooting take place?

JA> We shot in Costa Rica, just outside San Jose, in and around a little village called Pacayas and a volcano by the name of Irazú.

LBB> What was the shoot like as a whole? What were the biggest challenges you faced and how did you manage to overcome them?

JA> With every shoot there are challenges, and you now know the major issues with this one. But everyone who was part of this did an amazing job, especially the crew from Costa Rica who really worked very hard. Another issue was the music. There’s a legacy of using beautiful soundtracks on these Sony ads, and the track we’d originally envisaged proved too expensive. But during our search for a replacement we came across this spacious and mesmerising track, ‘Berlin’ by an Australian singer called Ry Cuming. It fits the spot perfectly and hopefully, if we’re successful, it’ll introduce him to a wider audience too.