Your Shot: Sir John Hegarty on The Chapar and Why Humour is Stylish 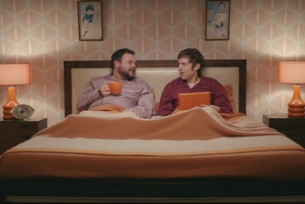 For men who hate shopping, sartorial flair can be somewhat challenging. That’s where The Chapar, an online personal styling service founded in 2012, comes in. The platform was created by father-son team Joe and Sam Middleton – and their new cinema campaign comes from another father-son team, Sir John Hegarty and his director son, Elliot Hegarty. The film was created through Sir John’s latest venture, The Garage Soho, an incubator that aims to nurture exciting startup companies by leveraging creativity.

What’s more, the campaign was produced by Royle Productions, owned by former BBH Head of Production Frances Royle. The Chapar project is the first time Frances has worked with John since leaving BBH. So not only does The Chapar’s film represent a new advertising model, it’s also proof that trust and mutual respect can truly elevate creativity.

LBB’s Addison Capper spoke with John Hegarty, Elliot Hegarty and Frances Royle to get the full scoop on this remarkable project.

LBB> You worked with your son, Elliot, on this project. How was that experience and have you ever worked together before?

JH> Working with your son is really an interesting experience. It ‘shorthands’ so much and gets you to solutions much faster. Of course this requires respect from both sides. Which we have. I hope we work together soon. In fact there's another project, yet to be announced, that I want to work with him on…

LBB> And how was it for you Elliot?

EH> I’ve shot a couple of ads for BBH in the past (nothing to do with dad), but have never worked directly with him. They say never work with animals or children or your dad. So I was a little tentative going in, but it was great, a real joy. He learnt a lot from me.

LBB> Did you keep things quite professional or did more of a natural father-son vibe shine through?

EH> I did say to him, if we argue on set, you can’t just send me to my room. But we had a very busy schedule (he knows how to squeeze every last nugget from a production!) and didn’t have time to muck about – we were very professional. Well, I was.

LBB> Frances, this is the first time you have worked with John since you were both at BBH. How was that experience?

FR> After a three-year gap, it was amazing to work with John. Obviously John knows exactly what he wants creatively – that coupled with a great client relationship meant that the process and approach could be totally focused on maximising the idea and execution.

LBB> And how was it working in tandem with both John and Elliot?

FR> This was the first time they had worked together but they have such a lovely father-son relationship. Elliot has directed a lot of comedy, most recently the Jack Whitehall film ‘Bad Education’. Elliot was totally in sync with John’s vision for the idea so that helped!

LBB> Comedy isn’t a genre often associated with fashion, why did you decide to take this approach?

JH> We wanted the brand to stand apart from the usual fashion brands. The most stylish thing you can possess is a sense of humour. Of course pitching that right is important. But it gets you noticed and admired. Not bad for a fashion brand…

The other thing to remember is being different. The idea of showing someone getting it wrong stands out from all the cookie cutter fashion brands that ape each other and all look the same. The problem for the fashion industry is, they wouldn't know an idea if it hit them in the face. The Chapar is going to change the way men shop.

LBB> John, how was it working with Royle Productions and Frances Royle on this project?

JH> It was great working with Royle productions. We are able to not only get the quality of production we were looking for, at a price The Chapar could afford, but also get Royle to handle all the necessary broadcast clearances and contracts. It's a great way for The Garage to work.

LBB> Frances, your team handled the casting. Who are the actors in the spot and why were they the right fit?

FR> We knew the idea and execution hung on casting a ‘funny’ duo and John and Elliot decided from the beginning that we should cast comedians. Luckily, after much research and casting throughout the UK, we found the brilliant Elis James and Lloyd Griffith who fulfilled our brief and more. The added bonus was that they were also good mates which gave us the really natural banter between them.

LBB> How else were you involved in this project?

FR> We produced the job from concept to supply and our role covered both the agency production and production company roles. Our producer was the wonderful Jeremy Barnes who was teamed with Toni Hambleton, an ex Senior Account Director at BBH and now budding Producer. We dealt directly with The Chapar so the process was fluid and extremely efficient.

LBB> Elliot, you say in the behind the scenes film that you wanted to approach the script like you do a TV project. Why was that? How did that approach inform the final production?

EH> There are less voices (agency, client etc.) in TV comedy compared to commercials. It’s a simpler process from script to screen, so I really wanted to protect the jokes from being over-intellectualised or picked apart. There’s no secret to comedy – hire people with a sense of humour and just get out of their way. One of the perks of having your dad as the creative was that I could just ring him up directly with a dialogue idea or to ask an opinion on casting etc. It meant we could avoid all those usual bumps in the road.

LBB> Given that two actors are stand up comedians, how did you work with them? Did you give them strict direction or was it more a matter of letting them be more spontaneous?

EH> In my TV work I like to create a fun and free environment on set. I like to be open to ideas from anyone – a comedy meritocracy, if you like. I believe this lightness on set always produces the best results. We had some dialogue in the original script, but I made sure Elis and Lloyd both understood that they were just jumping off points; I wanted them to improvise. They’re professionally funny and that’s what we wanted to tap into. That’s where the magic is.

LBB> What were the biggest challenges in bringing this campaign to life?

FR> Executing a funny dialogue-led spot is a rare and exciting challenge so the casting and contracting of Elis and Lloyd was one of the most important challenges we faced. Also working with John and Elliot required that we totally over-delivered at every stage of production to achieve the expected high levels of execution.

EH> Dealing with the creative - he was quite green.

LBB> John, what’s in the works for The Garage?

JH> This is the beginning of our point of difference as an incubator. We say,  'Don't start a business, build a brand'. We're going to be following this with a number of other new companies that want to build distinctive brands, using broadcast in some way or another to create competitive advantage. It's a new advertising model.

LBB> What are your most memorable moments from the production?

EH> My Dad saying he loved the final film (I think he meant it). That felt good.

FR> Watching and laughing at Elis and Lloyd, and observing John and Elliot creating magic together on set.

EH> This John Hegarty bloke has a bright future in the ad game. He should stick it out.