W+K London, Traktor and MPC on a rockin’ kid and her feline buddy 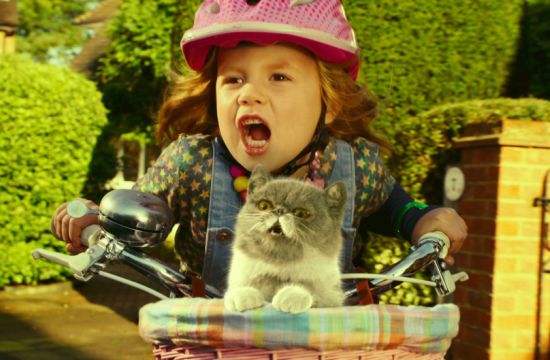 It’s nearly one year ago to the day that mobile network Three got very silly and a Shetland pony moonwalked onto our TV screens. The brand is back – and with even more silliness. Gone is the pony and gone is Fleetwood Mac. But in their place stands a fluffy, flat-faced kitten called Bronte, Starship’s ‘We Built This City’ and a rocking, cheeky five-year-old Mancunian. The only reason you wouldn’t be grinning from ear-to-ear is if you’ve got serious grump issues. LBB’s Addison Capper spoke with Wieden+Kennedy Amsterdam creatives Chris Lapham and Aaron McGurk, Traktor’s Ole Sanders and MPC’s Bill McNamara to find out where they the crowning duo.

LBB> It must have been pretty daunting following on from The Pony - how challenging was it keep that successful formula going, but still create something fresh?

W+K> It was pretty tough. The team on Pony did a great job so it was always going to be tricky creating the ‘difficult second album’ as everyone called it. We wanted to keep the ‘Silly Stuff’ formula going but we wanted to distance it as far as possible from Pony whilst also keeping it in the same ballpark.

LBB> The young girl is fantastic - what was the casting process like and where did you find her? Why was she the perfect fit?

W+K> We spent a long time looking at different girls for this spot and to find the right one wasn't easy – proper needle in a haystack kind of stuff.

We held casting sessions in London and Manchester using stage schools and street casting and in the end we lost count of how many girls we saw, although it's safe to say it was well into the hundreds.

We were wary of stage schools because we didn't want her performance to feel too polished or over-acted, but then street casting a girl with no experience is a huge gamble when you take into account how many people are on set and the pressures that come with that.

But with those things in mind we still had a really specific type of girl in mind: someone who was ideally really little, i.e. about five-six years old, confident but not cocky, cute but not sickly cute, someone with a certain X-factor that could hold your attention.

And so up stepped a little 5-year-old girl called Jolie from one of the castings in Manchester. After about 3 seconds of watching her casting video we knew she was the one. There were a few good back ups but no one else really came close.

T> We auditioned 250 girls in London and Manchester from the ages of six to nine. One 5-year old came in. She was the last of the Manchester call-backs and she brought everything alive. We retreated to the train station pub and celebrated quietly the existence of Super Jolie. She did not join us. She had a song to learn and sing.

In the DVD bonus materials you can hear Jolie's Mancunian rendition of ‘We Built this City’. Historic stuff. She was a complete joy. She was unfazed and untainted by the hullaballoo and she made us an excellent bead-necklace at the end.

Manchester, Manchester. So much to answer for!

LBB> The kitty has a touch of the grumpy cat meme about it! What kind of conversations were had around its expressions and appearance?

W+K> We searched through quite a few kittens to find one that was unique and ownable, but the most important thing was that it had to have the right level of cuteness. We didn’t want to go for a standard moggie. That’s why we picked Bronte, a 15-week-old exotic shorthair with a funny flat face and cool moustache.

When it came to bringing Bronte alive in CG there were a lot of conversations about what her expressions and performance should be like. We didn’t want to over-egg it too much so to begin with we played down her performance. Then, late on in the animation process, we realised that there was a slight disconnect between our girl and our cat, and what this spot is ultimately about is two friends getting lost in a moment of lip-synching heaven - so we gave the cat a bit more oomph!

T> We researched and found Flat-Faced Pleasure-Kittens. Bronte won the toss, and we shot her for reference of character and lighting. We actually got to shoot Bronte a lot more than we ever hoped for so we were able to carry over much of the personality and flat-faced outlook as it looked out. Ultimately, though, it is a CG interpretation of her method ways. The appearance of the Kitty in the spot is one of gradual emergence and increased confidence. Like a condensed puberty in an emotional cul-de-sac. Add music. Stand back.

LBB> Why was 'We Built This City' chosen for the spot's soundtrack? What other tracks were in the running after the initial creative was conceived?

W+K> There were a few factors we took into consideration when we began looking for ‘We Built This City’. We wanted to follow a similar formula as the first ad - a famous track that hasn't been heard in a while and has gone under the radar. But as this spot was about lip-synching to a big number, we wanted something you can imagine a load of friends down the pub belting out when it comes on. We also wanted something that would jar with what a five-year-old would be singing.

We had one other track in the running which was ‘Living on a Prayer’ by Bon Jovi, but it lost out by a whisker. *Boom-tish*.

MPC> Together with Traktor and Wieden + Kennedy we wanted to create a cat that was incredibly cute and captured viewers’ imaginations. We started out at that endless fountain of information: the Internet. Quite a few of our VFX artists immersed and drowned themselves in cute cat videos, and we focused in on one of ‘Snoopybabe’ the Chinese flat-faced Youtube sensation. We then set about finding a similar breeder in the UK. Bronte was chosen from an adorable litter because of her unique markings and size and was used as the base for our digital double.

LBB> And how early on were MPC involved in the production?

MPC> We were involved from the outset of pre-production. We created a 3D pre-vis of the whole environment to determine the camera moves and angles and were on-set to capture all the relevant lighting and intricate measurements.

LBB> What are cats like to work with in CG, compared to other animals and textures?

MPC> Cats are a bit of a challenge to re-create in CG - they have a very complex fur system for a start. The real Bronte was extremely fluffy, so that took some time to recreate. To create a CG cat our team needs to study the animal’s skeleton and muscle systems. On such a fluffy cat that wasn't particularly easy! Luckily Bronte is one of the rare cats that enjoy a bath so wetting her down helped.

In terms of the shoot, in the past we’ve worked with cats who have been a bit older and had more training - Bronte was only fifteen-weeks-old, so wasn't always co-operative on set.

LBB> What were the biggest challenges you all faced and how did you overcome them?

W+K> Working with kids and animals is renowned for being difficult. We’d like to add CG animals to that list. Creating a photo-real CG cat, giving it a personality and making it lip-synch was a big challenge. Luckily we’ve worked on CG jobs before so we knew that time was the most important thing to give the team from MPC who made the whole process seem easy.

T> The weather was unkind. We lost pretty much the whole first day. Other than that it was the usual slings and arrows of passive-aggressive crewmembers and actively cold coffee. All in a day's work. The presence of Jolie the Supergirl and Bronte the Champion Kitty kept everybody from displaying their most vile sides. We lived in that cul-de-sac for three days and fell in love with the shrubberies and retired army majors therein. We will always have Watford. And so will you.

MPC> Every shot of Bronte in the finished film is CG, so our challenge was to produce a photo-real Bronte that appears in close up. Creating a singing cat, when cats can’t sing was always going to be a challenge. The team used footage of cats yawning and snarling to apply to our 3D model. We also held castings for a human animation guide, who we filmed lip-syncing the lyrics, which was quite funny as one of them thought he needed to act like a cat! Keeping CG Bronte looking as realistic as possible and letting his personality and performance shine through was key to the spot.

Song: We Built This City – Starship