Behind the Work 328 Add to collection 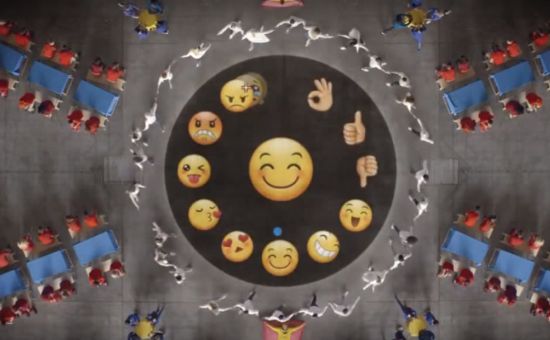 Minimalist music video meets ambitious choreography and the whirligig of modern life in a vibrant new campaign for the Samsung Gear s2 smartwatch. The creative was devised by RG/A New York, with ringmaster Michael Gracey keeping this mesmerising human kaleidoscope ticking along. Marshalling 120 performers from all walks of life and skill levels with the help of choreographer Cheyenne de Miranda was no small feat. Thankfully Michael is no stranger to the theatre or, for that matter, combining ambitious dance numbers with humanising details and observations; he was behind the seminal 2009 T:Mobile ‘Flash Mob’ spot and is currently in pre-prod for the PT Barnum biopic ‘The Greatest Showman on Earth’. Laura Swinton caught up with him to find out more about this zesty new ad.

LBB> What was it about the script from the agency that caught your eye? And how did you approach the treatment?

MG> I thought it was a great script because it showed something in the technology field, but demonstrated the product through human interaction. The Creatives, Eric and Chris, talked a lot about it not feeling choreographed but rather seeing the everyday actions of these people forming beautiful patterns. This choreography of life is something that I love - I love watching it and I love to execute it.

For the treatment, I did storyboards and I also started working out in 3D the sort of space and numbers we'd require to execute this. From a production point of view, there was a lot of talk about just how many people we would need to realize the top shots, so I wanted to start getting a feel for the size of space, number of people, and height and lens of the camera very early on.

LBB> In terms of the pre-production / production design, how did you develop the look and colour palette of the film?

MG> The color palette was definitely something that Eric and Chris had strong ideas about. They referenced Feist's music video for "1234" directed by Patrick Daughters, which is completely brilliant, that has people in bright colors but all dressed in their own style. We then started looking at different color palettes against the concrete floor, wanting to make sure that each app on the watch felt unique and that the actions popped out.

LBB> How did you land on Cash Cash's 'Kiss the Sky' as the right track to use? What does it bring to the energy of the final spot?

MG> We played with a lot of tracks through rehearsal and even into production. Cash Cash's 'Kiss the Sky' seemed to be the right fit for the energy and the brand. And in the final spot, it just seemed to be the track that when played against the pictures, everything just fell into place. Quite like when you're listening to a song while watching the world go past outside and, all of the sudden, everything just falls into sync. That's what happened when we played this track over the rehearsal footage.

LBB> There's a real music video vibe to the spot - was that something you were consciously drawing from in your approach to the spot?

MG> Yes, the music video feel was conscious in that everything was driven by music. It's not every day that you get to make a commercial that goes for more than two minutes, so that lent itself to the shooting style as well.

LBB> How many performers were involved and what was the rehearsal period like?

MG> There were over 120 performers in some of the sequences and the rehearsal period was vital for us to work out the choreography. But like all things, new ideas came on the day, so new choreography had to be executed in record time by Cheyenne de Miranda. We were very fortunate in that respect to have someone who could take ideas in real time, teach them to a large number of people and be ready to shoot in such a short amount of time. This spot wouldn't have been possible without her.

LBB> You've got loads of experience with theatre and Broadway - how useful is that experience when approaching a project like this?

MG> I love anything that is theatrical, I'm completely drawn to dance and choreography, it's something I always get a kick out of shooting. But when working at this sort of scale, you also have to take into account the human interaction, not just the spectacle. And those moments of joy, those moments of happiness are quite often something you capture during rehearsals or in between takes. This piece was certainly a result of knowing how best to capture those genuine moments.

LBB> With the top-down camera and circular arrangement I also got the impression of a stripped down, fresh contemporary take on a Busby Berkeley routine - just wondering if that idea factored into your vision of the spot at all?

MG> The Busby Berkeley reference was definitely something that Chris, Eric and myself talked about. Again, the idea was to make it less dance and more everyday actions, but to have the same visual excitement as the classic Busby Berkeley routines.

LBB> What were the trickiest elements of the production?

MG> The trickiest element is really dealing with so many people with different levels of ability in terms of dancing, and managing evolving ideas that are too good to ignore.

LBB> And best memory from the shoot?

MG> The best memory from the shoot was definitely the last shot of the film, where everyone runs in and when the music stops, everyone runs out of shot. It was the last thing we shot after many days of very precise work, and it really was great to be able to tell the cast that they didn't have to hit their mark, they didn't have to go on a certain count, they could just celebrate in whatever fashion they felt appropriate. The smiles on their faces combined with the excitement that we were on the final shot and that they didn't have to sync up or remember any more choreography was indeed a source of very real joy and celebration.

It was also great to collaborate with R/GA NY. They were such a brilliant team and it really was a great leap of faith on their part and the client to not really see it all come together until we were there on the day of the shoot. The spot truly was a result of great creative collaboration.