Behind the Work 540 Add to collection

adam&eveDDB’s Jeremy Craigen and The Mob’s Paul W.S. Anderson on a genre-twisting campaign 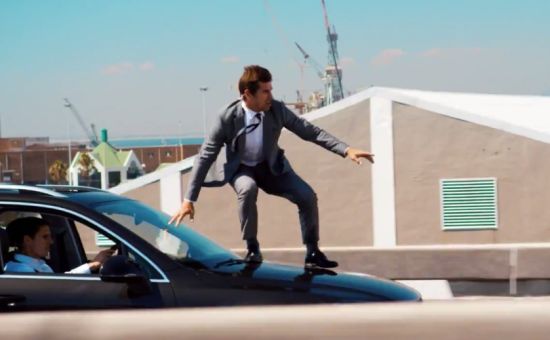 It takes a certain kind of director to shoot a properly exciting action movie. It takes perhaps even more of a particular director to distill the excitement of a properly exciting action movie into a 60-second commercial. And that’s why adam&eveDDB brought on board high-octane action guru Paul W.S. Anderson to shoot a series of amusing ‘anti-action’ films for Volkswagen. The first of three to be released, ‘Bus’, features a fast-paced pursuit even Keanu and Sandra would be proud of before the VW’s safety features kick in and leave the potential heroes empty-handed. LBB’s Laura Swinton spoke with DDB Global ECD of Volkswagen, Jeremy Craigen, and The Mob’s Paul W.S. Anderson to talk drones, dodgy driveways and debris.

LBB> What kind of brief did VW initially present you with and what were your thoughts when you saw it?

JC> The brief from VW was very simple. Could you tie a closer link between VW and their support of independent cinemas? They didn't actually ask us to feature cars within this task but that was obviously a bonus!

LBB> ‘Made for real life’ marks a shift away from the successful ‘See film differently’ cinema campaign. Why was the time right for change? How tricky was it to follow that up with something fresh?

JC> I was a massive fan of the See Film Differently campaign. From the first ad, Toy Story, to the last campaign with Jaws, Taxi Driver and Silence of the Lambs – and the public loved them too. But I just think however much people liked them they always wondered what they had to do with VW.

Obviously it was a very tough act to follow creatively, and we shared a couple of campaigns with VW before they finally went with this one. And I'm glad they did!

LBB> What were the key inspirations that drove the campaign?

JC> The creative team, Nikki and Toby, totally immersed themselves in to the world of high-octane Hollywood movies where cars played a pivotal role. It was then a question of matching the cars’ innovative features with the right stunts.

LBB> Why was Paul W.S. Anderson the perfect guy to shoot 'Made for Real Life'? What did he bring to the final spots that others maybe couldn’t have?

JC> I worked with Paul last year on the launch of the new Golf GTi – he directed the driving scenes around Las Vegas. I found him to be the complete opposite of what you'd expect from a big Hollywood director. He was incredibly collaborative and was always willing to listen to all the different opinions that you get on a shoot. When we talked about potential directors for this campaign, his name stood out from the rest.

JC> Our biggest problem was money. We had a limited budget so we knew Paul had to love these scripts for him to do them – and the only way to do them was to shoot all three commercials over three days.

This is where Paul's background as a movie director really paid off. He is so damn quick!

LBB> What else can we look forward to with 'made for real life'?

JC> Well there are two more to come. They're called Explosion and Chase. But that's all I can say about them for now...

LBB> What was it about the script that jumped out at you as something you’d like to get involved with?

PA> There were three scripts, and the first one I read was ‘Bus’. I just thought it was laugh out loud funny. It read as a really great action script and then it had this wonderful twist at the end where things didn’t quite go the way the heroes wanted. You know there’s a really great piece of material to be made when the script alone really catches your attention like that. It just leapt off the page and you could visualise it immediately.

LBB> And I know VW has been supporting independent cinemas for a while – as a film director, did that make a difference at all?

PA> Well it was certainly fun for me knowing where it was going to play. I used to go to independent cinemas a lot, but my material was never played there because of the movies I make – they’re always playing in a big complex somewhere. So it was fun to make something that would be playing in the kinds of venues that I used to visit a lot but my movies never play in.

PA> The campaign was shot in Cape Town, South Africa. I’d shot in Cape Town once before and was very impressed with the quality of the crews and the depths of locations there. It’s a very film/commercial friendly town. One of the amazing things is the cut-off highway that runs right through the centre of town. It’s a full on, elevated motorway, but it doesn’t go anywhere. Someone – who I presume got fired afterwards! – was organising its construction from opposite ends of Cape Town and it was supposed to meet in the middle. When they got to the middle they realised that where the roads were to meet was going to be way too sharp, and they were going to have cars flying off the elevated road. They couldn’t finish it, but had already knocked down houses and built most of it – so it was just left standing there. It’s perfect for shooting scenes like that. The only slight problem was a highway below, which we had to shut for some scenes where there were parts flying into the air.

LBB> What are the secrets for injecting a blockbuster feature spirit into a 60-second commercial?

PA> For me, a lot of the commercials that try to do that rarely work. And that’s because the piece of footage that’s supposed to be from the big action movie just doesn’t look like it really is.

There are two elements to getting that to feel right. Firstly, in action films the camera never stops moving. Often when people try to imitate them they use ground-based static cameras – something that just doesn’t happen in those types of movies. Secondly there’s the sheer level of coverage you have to capture to look like a modern day action movie. You need to have a cut every seven or eight frames, which means you really need to get in there and do 50-60 set ups a day if you want to get in and out in a day, like we did with the VW shoots.

It’s also important to use all the toys that are common when shooting action films. You need drones in the air, multi-camera coverage on the ground, a high performance tracking vehicle, and more. But you must brief your crew well and be organised, otherwise those things can descend into danger and chaos.

LBB> I guess working with an editor that understands that pace and language is important too?

PA> You need to be careful with who you work with because it’s very easy to be overwhelmed with the vast amount of footage that’s produced. You need an editor that’s going to go through all of that that and be able to pick out the little gems.

LBB> What can we look forward to in the other two spots?

PA> But they’re both really good and have the same feel of an action movie with the twist. There’s one called ‘Chase’ that I’m pretty proud of. The spot has a chase scene that features so many shots, and in each one the cameras and cars are all moving at about 80mph.

LBB> Considering the scale of the production, it’s nice to hear of an agency and client that really sees the value in good, proper craft.

PA> I think they realised that if they didn’t craft these with an action movie maker then they were never really going to get that authentic look.

We actually used a lot of drone technology that was built in the U.S., but can’t be used there anymore because their use is against the law. At some points we were using these drones at around two inches above the cars.

LBB> How tricky is it to get the balance between the action and comedy that we see in these spots?

PA> I think the scripts were so cleverly written that the comedy came quite naturally. We didn’t have to force the joke at all. But obviously those punch lines were the main focus, so when we were shooting I’d sit with the agency and client and discuss whether we felt we’d got it right or if we needed to do another take. There were a dozen people standing around saying “is that funny?” and trying to gauge what comedy is. When things are exciting it’s pretty obvious – a bus hitting a barrier is exciting. But when you’re dealing with comedy there’s a lot more discussion involved. We would slow down the pace of the shoot, discuss, and make sure we had what we wanted. Action is easy, comedy is hard.

LBB> The strapline for the campaign is ‘Made for real life, not movies’ – what was it like for you poking fun at and playing with the genre that you’re so famous for and familiar with?

PA> I loved it. It was also an opportunity to show that I’m a funny guy. There are elements of humour in all of the movies I’ve made – you need a bit of humour to make the audience smile and leaven the tension a little bit. I’m not known as a comedy director, nor do I think I’d want to direct a comedy movie, but it was fun for me to show off those comedy chops and that I’m a funny guy. I don’t always have to blow stuff up and kill things.