Behind the Work
1.7k 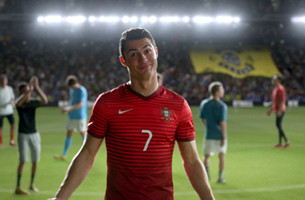 We’re feeling a bit nostalgic at the LBB office this week. Nike’s superstar-packed World Cup ad has ‘jumpers-for-goalposts’ play park football built into its DNA. Even its title ‘Winner Stays’ is taken straight from the complex laws of the playground. The World Cup ad is a four-minute blockbuster that begins with a group of kids boisterously having a kick-about down the park. It all quickly escalates into the most over-the-top, All Stars match of all time. The Incredible Hulk even has a pop at playing goalkeeper. Rattling Stick director Ringan Ledwidge explains to LBB’s Addison Capper how he, Wieden+Kennedy Portland and The Mill brought boyhood dreams to screen.

LBB> What kind of brief were you initially presented with and what were your thoughts when you saw it?

RL> The guys at W+K are great to work with. When they call to say they have a World Cup spot they want you to look at you can't help but be excited. The script obviously evolved throughout the job, but the thing that made me want to direct it in the first place was the simple truth of playing football with your mates and imagining that you're your favourite player and playing on the world stage. It’s very pure and is something anyone who loves football or loves to dream can relate to.

LBB> What kind of processes were involved in the pre-production of the film?

RL> A lot of talking! On a job like this there are so many moving parts, so clear communication was crucial. Logistically it's a monster; just times everything you normally do by a hundred! Sally, my producer, and her team dealt with the endless permutations amazingly. Without them taking the pressure off me and allowing me to focus on the tone and energy of the spot I could've easily lost my way.

LBB> I love how the film escalates so dramatically - how did you go about achieving that and why was it the right direction for the film to take?

RL> It felt to me that the spot had to start in a very real, grounded place – something that was easy to connect with. Once the guys begin to use their imagination the sky’s the limit. It's like one-upmanship. I mean, if you’re going to imagine being your favourite football player, you may as well imagine playing in the biggest game in the world.

LBB> There's a real balance between the realism of the 'football down the park' situation and the 'over-the-top superstar fantasy' idea. How did you achieve that balance?

RL> The heart and the realism of the film comes from the boys. Without a doubt the most crucial decisions made were that of the casting. I was lucky enough to get a group of young guys, barely any of whom had done anything before.  As well  as making every day a lot of fun, they poured their heart and souls into the job. Their enthusiasm was infectious. When the stars came to the set, the boys’ love of football resonated with them. They instantly got the tone and humour and embraced it.

LBB> There's a lot of post involved in the film – what was it like working with The Mill and how involved were you in post production?

RL> At the beginning of the job I was terrified by the amount of post involved. I generally tend to shy away from things that are so post heavy, but control, ever-changing player schedules and the scale that I wanted to achieve dictated that it was the way to go. I have a great relationship with The Mill and I've worked with Tom Bussell [Head of CG] and Barnes [Creative Director, Andrew Wood] on numerous occasions and I know I can trust them. As with everything on this job it was all about preparation and having a clear vision. Tom and Barnes are all about that and, along with the guys in the LA and London offices; they pulled something amazing out of the bag. I owe them all a big thank you. A huge shout out also goes to the DOP Ben Seresin. We shot in four different studios, had to transition from day to a night time stadium feel and get it to match, even though we were shooting out of sequence. No easy task. I have to say I don't think anyone else could have done that as well as he and his gaffer Dave Tyler did.

LBB> How was the shoot as a whole? Did working with so many high profile footballers pose any problems at all?

RL> The shoot was long, at times daunting, infuriating, stressful, but mostly fun – and that was key. No one was going to die. The important thing was to stay calm. Players would turn up when they'd turn up – and when they did we had to be ready. They were all great and got involved.

LBB> What were the key challenges during production and how did you overcome them?

RL> The key challenge, outside of the obvious technical and logistical problems, was, as it is on many jobs nowadays, keeping hold of and protecting the original vision that got myself, the creatives and CDs excited about the project. This is often the hardest thing. On a job that stretches out over such a long period of time that can be wearing, particularly if you are often having to justify many creative decisions you know to be right. My feeling is that myself, the editor and the agency are paid for our opinions and are therefore duty bound to be the guardian of them, and to fight for them right ‘til the end. On the whole I think we fought a good fight.