Behind the Work 882 1 Add to collection 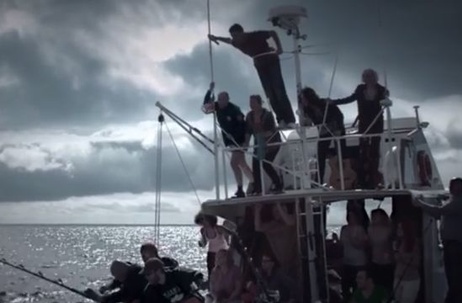 LBB> What was the brief from the client and what were your immediate thoughts when you saw it?

RW&MY> National Geographic Channel wanted to focus on their various television series and how we, as viewers, get so pulled into unexpected places – both geographically and emotionally.

LBB> What were the shoots like as a whole and where did they take place?

RW&MY> We shot in Croatia, a location as exciting as the places National Geographic is known for.  That said, it was a very challenging shoot. Weather especially, in the Alaska part, made for beautiful film but also made it very difficult for the crews and actors to perform.

LBB> Why was director Reynald Gresset the right person for the job and what did he bring to the final productions?

RW&MY> We knew Reynald was right for this project after talking to him on the very first phone call. He got the concept from the start and gave us a very clear, visual way to tell this story.

LBB> How long did it take to fully develop the concept and what were the key challenges you faced?

RW&MY> The campaign was about six months in development.  There were four spots of varying lengths to be filmed.  As mentioned above, this made for a rigorous shoot:  four days in a region where we could access water, mountains and cold war bunkers within short car rides from one another.  But it also led to a few unforeseen cultural issues, like getting a wardrobe and other props that look American and appropriate to the shows.

LBB> This is National Geographic's first brand campaign for four years - why was it right to launch something of this scale now?

CM> With the incredible momentum the channel is currently experiencing, it is a perfect time to take advantage of the marketplace excitement in this channel to re-energize our fans and introduce this network to new viewers

LBB> Strategically, what do you feel this campaign will achieve for National Geographic Channel?

CM> Working with our partners at BBDO New York, we set out to create brand definitional spots which truly capture the awe and excitement viewers experience when they watch a show on our network. With these spots, as with our programming, you don’t just find yourself somewhere new, you find yourself totally, emotionally engaged in the stories. This emotion is triggered by the drama, tension, strangeness, struggle, triumph and fascinating characters inherent in our programming – programming that is authentic and that expands your understanding, challenges your perceptions and rekindles your awe of the world.

LBB> What was the brief from the agency and what were your immediate thoughts when you saw it?

RG> My producer, Michael Sagol, and I were immediately attracted to this project. I really liked the sharpness of the scripts, the creation based on offbeat characters and these ‘intruders’ in staggered sets. And, of course, I love National Geographic and I was thrilled to shoot something for them.

LBB> What appealed to you about it?

RG> The offbeat idea and the poetry of the subject really appealed to me. The originality of the campaign comes from the idea of integrating these extreme sequences into the banality of the everyday life of the viewer. I loved mismatch between the heroes and their audience, as well as between life and death situations and situations of everyday life – all told with a smile.

RG> The main problem was to find a country where it would be possible to find snowy mountainous landscapes in the spring, as well as access to the sea. The perfect choice was Croatia. Croatia also worked perfectly for the casting needs. We wanted to create realistic, simple situations that would keep the spots rooted in reality for the viewer.

I’d also like to note that transporting an aircraft to the snowy mountains is no easy task.

RG> I absolutely wanted to shoot in the actual atmospheric conditions. For example, we shot in the snow and negative temperatures for the wintery mountain scenes – this was very hard on the actors and extras. I’d like to thank them for their courage because they were outside in tee shirts and had to pretend to be comfortably installed at home – that wasn’t as simple as a traditional performance on their part.

For the ‘Tuna’ film, we had requested that a group of people cling to the boat, so they all really had to use their sea legs. Shooting at sea and in the mountains was a bit complicated from a logistical point of view but it was definitely worth it. For all of us, this shoot was a very beautiful human and technical experience. We also had an excellent and collaborative relationship with the agency, so that helped to make the shoot go very well.