Your Shot: Mill+ on Their Epic Thread Adventure with The Fableists

Behind the Work 426 1 Add to collection

A little girl, a little pug and a big message in a colourful film from animation directing duo Kwok Fung Lam and Ivo Sousa and Brothers and Sisters 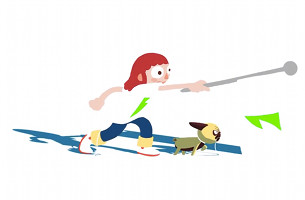 Following on from ‘Finn’, a short film that follows a day in the life of a young skater, sustainable kids clothing brand The Fableists has launched ‘The Epic Thread’. Created by Brothers and Sisters and produced by The Mill’s in-house creative studio Mill+, The Epic Thread is an animated film that tells the story of The Fableists’ clothes through a fearless young girl and her pet pug. By following a thread in the girl’s t-shirt, they embark on a wonderful adventure. British comedian Jennifer Saunders provided the voiceover and Eclectic composed a specially recorded track that zips along with the action.  The end result is a short that appeals to the kid in all of us. Mill+ animation directing duo Kwok Fung Lam and Ivo Sousa told LBB’s Addison Capper how they brought the story to life.

LBB> What were your initial thoughts when you saw the idea and the story?

KFL&IS> We were real fans of Brothers & Sisters’ script when we saw it. It provided a fantastic creative opportunity for us and the Mill+ team, as we were given a lot of freedom to run with the story. Our first thought when interpreting the script was “How would a child view this world?”.

We wanted to create something that tied in with the idea of the protagonist following this piece of thread, going on an adventure with something unexpected happening at every turn. We decided early on that the transitions for many of the scenes would make the journey feel constant and reflect the character's sense of discovery.

LBB> The aesthetic is really distinctive – what were you trying to achieve with it?

KFL&IS> It’s a style that comes across in our work quite often, but we wanted to push things with this film and really do something a little different. The initial sketch work we did on the character design lead to the final aesthetic… the client really liked the negative space around our hero girl and so we worked that look and feel into our final film. We wanted to bring a new and adventurous tone to the animation, to fit in with the adventures of our intrepid duo and really draw the viewer in.

Drawing from the graphic designs of Fableists-ware as inspiration, we used bold colours, compositions and textures, allowing the main character to transport us through the journey as if we belong within in the world with her. Tight cameras, exaggerated angles, bold transitions, distorted reality and a constant sense of surprise added to the feel that the viewer is seeing an exciting world through a child’s eyes to capture the idea of an epic, fantastic and energetic journey.

LBB> And the ‘negative space’ style animation – why did you initially start dabbling with that?

KFL&IS> We worked with sketches at the beginning to spread the net as wide as possible when character designing. As we started to refine the character further and bring in the colours, the negative space just seemed to work and became a really original way to show off the character and the clothing she was wearing. The agency were really inspired by what they saw and asked us if we intended to create the whole film like that! Of course, we said yes!

As this was based in a child like world, within a child's mind, we wanted to create a sense of discovery at every corner that was obscured by the layer of white background popping into the main stage with the progression of the animation. Stripping back all the unnecessary elements was important, focusing only on the way the child perceived each scenario.

LBB> Does working with that style of animation throw up any added challenges?

KFL> – Yes it did, but they were pretty fun to resolve as it meant animating more stuff. When we were doing the style frames we tried to treat each one as a piece of illustration. The frame had to be interesting as well as get the part of the story across to the viewer. On some shots, when they were in motion, they looked a bit too bare. We added a bunch of effects and elements to pick out the negative space to give it more of a sense of scale around the characters.

IS> The big challenge was to hook every shot, creating a sense of fluidity and giving each scene it's own independent feel. Transporting a child to a fantastic world and mirroring this into the animation. Technically there were different approaches such as the use of flash, 2D and 3D which needed to be combined seamlessly.

LBB> One of my favourite things about the film is that the main character is a girl. I know that wasn’t necessarily the idea from the beginning but it works really well… just wondering what your thoughts are about that?

IS> Throughout the character design stages the designs leant towards a female gender character. We were keen on a tom-boyish character; a curious and rebellious girl who isn't afraid of adventure. It just felt right and we connected with the look and feel of the final design.

KFL> It was quite refreshing to have her as a bit of a tom-boy, not being dainty or fitting into the usual gender stereotype of children's animation. We tried to show her rough and tumble side as well her softer side when she helplessly watches her dog drown in an unrelenting barrage of rapids.

LBB> Personally, what are your favourite elements of the film?

KFL> Our favourite shot is the stormy sea shot on the boat. My favourite elements are the OTT changes of perspective between shots that hopefully keeps the viewer on their toes.

IS> The film needed crescendos and calmer sections in order to create diversity and give a sense of adventure and the sea scene really does this. It needed to feel very epic, as it's where our character is in full flow, crossing the unknown.

LBB> The heart of the film is about knowing how, where and by whom our clothes are made. Has working on the project changed the way you think about where your clothes come from?

KFL> Yes of course – how can it not? This film is just the tip of the iceberg. It lightly touches on the process and the issue of environments, sustainability and the people that work in clothes factories.

It’s worth delving further into the brand to really understand how that all works, as we only had a short amount of time to tell our story. But yes, I have taken more of an interest in how and where my clothes are made, and especially the fact that in some cases my own children might be wearing clothes made by children in squalid conditions. That just seems so wrong.

LBB> Jennifer Saunders narrated the piece. How was it working with her and what did she bring to the final production that you feel others couldn’t have?

KFL&IS> It’s always great to put a name to a film. It brings it up to that final level. It was also great that she wanted to get involved, and we took that as a compliment!

LBB> The music is outstanding too - it has a real rebellious edge, but is also completely suited to the kid in the film. What are your thoughts on it? How closely did you work with guys at Eclectic to make sure you were all on the same page?

KFL&IS> The guys at Brothers and Sisters made sure we were happy at every stage of the way, so we worked closely with them and Eclectic to ensure the audio was working with the visuals. The tone of the final film was how we had always imagined.