Behind the Work 446 Add to collection 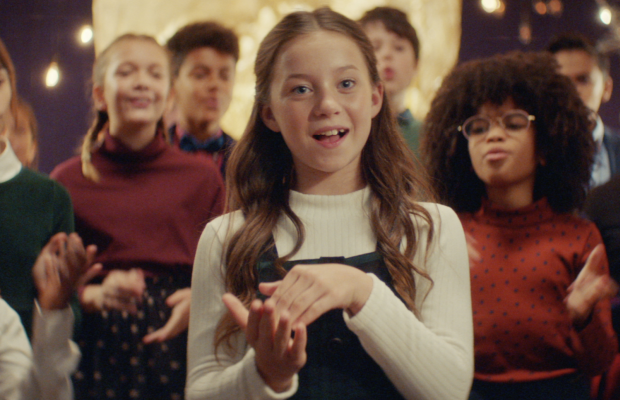 Wieden+Kennedy Amsterdam's Christmas campaign for Milka this year, entitled The Unsung Hero, serves as encouragement for viewers to give back to the people that work tirelessly behind the scenes to make the festive season special.

The sweet film, directed by Cake Film and Photography’s Dr. Bowman, shows a group of kids rehearsing a version of the gospel track 'You've Got The Love'. A choir member forms a bond with an elderly man who is working on the maintenance and build for the choir's upcoming show. The man is deaf and on the night of the show the young girl performs her solo in sign language so the the man can appreciate the performance along with the rest of the audience.

Tasked with creating the music for the film was made by MassiveMusic who, along with Wieden+Kennedy, partnered with the European Union of the Deaf, who acted as consultants during the creative and production process. To ensure the music in the film was accessible to the Deaf community, a musical interpretation of the soundtrack using International Sign Language was also produced.

LBB> What was the research process like that led to this campaign? What was the strategy that drove it? Where did the idea for the sign language link come from? How did it stem from the initial brief from Milka?

Edouard> Empathy is at the core of our campaign, and in a broader sense at the heart of the Milka brand. The team was researching how empathy manifests itself in our lives and how it is communicated and shared on social media when they stumbled upon a video of a young girl signing for her deaf dad while they attend a concert together. It seemed to encompass everything we wanted to communicate at Christmas: the feeling of care, the importance of sharing. That prompted us to tell this story.

LBB> You collaborated with the European Union of the Deaf - how did that initially come about and what was their role in the campaign?

Edouard> From the moment we got the clients on board we knew we had to seek council from the deaf community to make sure we were telling a genuine story. They were the best partners we could have hoped for and helped us every step of the way, from vetting the original script to advising us on set.

LBB> The hero actor was deaf - what was the casting process like?

Edouard> It was an exciting process to find the talent that would embody our hero, there was no doubt in our mind that he would be a deaf actor, it was a lengthier process than usual but it was well worth it.

LBB> How did that make you reassess your approach on set and what lessons did you learn for the future?

Edouard> We knew that communication would be a critical element on set, so we had to change our routine and learn to communicate in different ways, through interpreters, of course, but also through any means we could find, like writing on our phones and doing a lot of expressive gestures. It just created a great atmosphere where everyone was really focused on listening to each other. It was a special experience we won’t forget.

LBB> How closely did you work with MassiveMusic on the music? What was that process like?

Edouard> MassiveMusic are longtime W+K Amsterdam partners and we have a great relationship with them, so the process was very open and collaborative. In this specific case the song and the narrative are so intertwined that we brought them in earlier than usual to make sure that they would match perfectly. They did a great job at recording the song with both simplicity and emotion and were with us on stage to help direct the choir.

LBB> Guido, how early on in the process did you get involved in this campaign? What kind of stage was the music at then?

Guido> We got our teeth into it since the concept stage, working side by side with the agency, production company and directors. We were very thrilled about it since it doesn’t happen very often.

LBB> Tell us about the thought process behind the choice of song - why was this big, bold, emotive track perfect for the campaign?

Guido> We also dug into other possible musical options but eventually decided to stick with the original idea. After all, we had to work on the re-recording of a song that could embody and convey an emotional message. It’s a track that does bring the right kind of energy, warmth and lyrics to the mix.

LBB> And then when it came to re-recording it, what were your main aims and ambitions?

Guido> The main goal was to make the storyline and the music go hand in hand as much as possible. We wanted it to be realistic and impactful so we had to focus on every single detail. The first phase had to do with the rearrangement of the track, followed by rehearsals, recording and on-set music direction.

LBB> Were you on set? If so, how did you find the atmosphere there?

Guido> Yes, my colleague Tom Tukker and I were both on set, and that was quite a must, because we had to ensure that what you hear was also perfectly in line with what you see. Lip syncing at its finest. We also had to take into account different kinds of cutdowns with slightly different structures. The atmosphere was electric, not something you get to see every day. It was lots of fun to be working with a kids choir also because most of them were involved during the whole project (from rehearsals and the recording studio to the shoot). And I can tell you, what you hear on screen is pretty much the same as what we listened to during the shoot. These kids are crazy talented.

LBB> What were the trickiest components with regards to the music?

Guido> The production ended up having plenty of harmonisations and almost no instruments, so the trickiest part was keeping it all interesting and pleasant to listen to by only using vocals. We had to make sure we didn't translate the original song into a predictable version as we had to keep it interesting for both the 30-second and 60-second films. We also created a full-length version based on the same vocal arrangement, and it went straight to #3 and #1 on Austria and Germany Viral 50 Spotify charts!

Edouard> The trickiest component was to make the recording beautiful but not too perfect. Children choirs have a certain frailty and innocence that convey more emotion, we didn’t want to lose that and the guys did a great job at keeping the track genuine.

LBB> The music is such an important part of a campaign - especially at Christmas! Do you think this is something we will see more in the future?

Edouard> Great tracks have the power to draw us into the story and communicate emotions in a very raw and powerful way. Using iconic tracks at Christmas isn’t something new and is actually part of the Christmas transition. When the season starts we hear the same standards on repeat. People find comfort and reassurance in these familiar tracks and it’s not about to stop.

Guido> It’s always interesting to turn a very well-known track and arrangement into a completely different performance. Music plays such a powerful role in getting the right kind of emotion across, so it’s definitely something people should keep in mind when creating a Christmas ad – and throughout the whole year.

LBB> What other trends are you seeing with regards to music and inclusivity?

Guido> If I have to think of the Western society I live in, what I’ve noticed is that, despite being an individualistic one, we shifted more towards a ‘collective’ era, especially during the last couple of years. We never paid so much attention to the community as of now. There is this sense of togetherness and equality that is screaming for attention, and rightly so. See the ‘Me Too’ or ‘Fridays for Future’ movements. Also at Massive, more and more often we get to work on manifesto campaigns. It gives us even more motivation to create badass music because we know that we’re not only delivering quality work but we’re also doing something for the world we live in. That’s also what inspired our MMMMbassy party in Cannes earlier this year. It was all about inclusivity so we pretended, at least for one night, to live in a new world where all VISAs got accepted, no matter where you came from.