Behind the Work 633 Add to collection 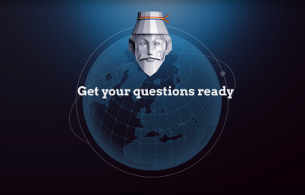 No chocolate bar has ever been so tied up in the concept of national identity as the ROM bar has. The packaging is coloured to match the blue, yellow and red of the Romanian flag and the chocolate itself bears the word ‘Bucharest’.

And over the past few years, the team at McCann Bucharest has been taking the brand deeper into the Romanian psyche. There was the ‘not Budapest’ campaign to address the irritating confusion between the name of the Romanian capital and the name of the capital in neighbouring Hungary. In 2011, they wound up locals by swapping the Romanian flag for an American Stars and Stripes.

And this year they’ve decided to bring the whole country together to create a new virtual ambassador to help change perceptions of Romania. He’s an artificial intelligence who will be able to give foreigners an authentic insight into Romanian life – and all of his answers have been created from responses given by the Romanian people. As of December 1st, over a million Romanians have been busy answering questions – and in early 2017, Rombot will be ready to take on his full duties.

LBB> Why was artificial intelligence and chat bots something you wanted to explore with this project?

Ioana> Romania is a country that has a lot of struggle with its image abroad. There’s been a lot of discussion in the past years in the media about how we are seen abroad, how we are represented, how the people outside the country perceive us and who we truly are. And it sometimes felt like the opinions in the country are divided or quite the opposite from what you would find in regular search engines towards what Romania and Romanians are all about. We wanted to create a communication tool that can have the voice of all Romanians in the country and talk about the real values of who we are. Thus, artificial intelligence came as the natural way to collect all data from Romanians and voice it out to the world. It was the best technology at hand to get all Romanians to tell the world who we are.

Catalin> Rombot is a project that goes beyond artificial intelligence and chat bots. That is just technology leading to a bigger purpose. With Rombot, we are doing an experiment that is engaging a polarised society and is making them understand that, in order to change the image that we have abroad, first we need to agree on what are our true values.

LBB> Over the years your projects with ROM chocolate have really played with Romanian identity in a really cheeky way - the 'American Rom' campaign for example. How have these projects changed the way the brand is perceived in Romania?

Ioana> ROM is a traditional chocolate bar with the colours of the national flag on the wrapper and the capital city written on the bar. Over its modern history, ROM has tackled the national pride of Romanians by changing its packaging, educating foreigners about the name of our capital city and changing perceptions on the internet about the nature of Romanian people. With every brand campaign, ROM has managed not just to increase its brand love but also increase sales volumes and market share. I think people have gotten used to the anticipation of another ROM campaign with every new National Day of Romania and it seems like the brand never let them down.

Catalin> Every campaign for ROM tackles a strong social insight and manages to gather Romanians around a certain cause. It offers them the tool to change something.

American ROM played around the insight of “reactive patriotism”. Romanians tend to defend their values, name and reputation only when attacked from the outside of the country. So, we created a provocative campaign replacing the national flag on the pack with the American one, to wake up the patriotism inside them.

With the Rombot, we are tackling the insight that Romanians are never happy with the image they have abroad. So we are giving them a tool, through Rombot, to build the image they think is most representative. There’s only one catch: they can only do it together.

So, in Romania, ROM has become more than a chocolate bar. It’s getting closer to a national icon.

LBB> I love that the Romanian people have contributed to the project! How did you inspire them to get involved?

Ioana> As with most of the campaigns you love, when you launch them you can never be sure that people will love it as much as you do. So we had a lot of back up plans for getting Romanians involved in case they didn’t. We created a teaser to grow the anticipation about the campaign, and on the National Day of Romania we launched the project. In the early hours of the launch we went live on national TV and that got the Romanians pumped. Soon bloggers got to teach the Rombot and that got the conversation going. And even though we were ready to believe that Romanians will teach it bad stuff, to make fun of it and see if it goes bad, we found out that Romanians actually taught it the right things. That was the first day. It only went uphill from there.

Catalin> Rombot is like a kid that is being raised by an entire country. The way we talk to him and what we teach him will develop his personality. And that personality and knowledge will be our image for the world. Every Romanian acts like a parent and wants to embed his values on our AI ambassador. This creates conversation.

As the experiment continues, we will publish statistics about what the majority of Romanians answered. In many of the questions, the answers are polarised. Romanians don’t agree on the answer. This makes others want to join the conversation and influence the answer that Rombot will remember to tell the world about us.

LBB> It's a great way to show off Romania's digital/tech prowess too - was that important to the project?

Ioana> Romania is a country with strong tech knowledge. To me that’s almost like a national pride, to be honest. We have some of the best programmers in the world here and that only made things easier for the project.

LBB> What were the trickiest or most challenging elements of the campaign?

Ioana> We’ve been working for many months on the project and as December 1st came, all of the team involved probably didn’t sleep for the first 48 hours. The volume of data and real time statistics we received was gigantic. We have several servers to support the immense volume of data and entries we receive, but in the immediate hours after the launch the volume of entries was so big that the site went down for around five minutes. In the history of mankind, I don’t think any group of people have held their breath for so long!

And in the midst of our worse nightmare, we realised that we’d achieved something great as we remembered Canada’s immigration website crashing down. The Rombot was back up in no time and we brought even more servers to support the data. To date we have more than 1 million answers and the Rombot hasn’t stopped learning for one second since.

LBB> How did you find working with AI / chatbot technology? Did you bring anyone in specifically to help you with that side of things? Was it simpler or more complicated than you'd imagined?

Ioana> The Rombot is a mix of the two. It looks and acts like one after it’s trained, but it actually is a learning machine that can be trained by anyone right now. To top that, the learning machine was made up in Romanian language and the available language databases we could use to make the Rombot conversational were limited. So we created it and programmed it from scratch. To do that we made up a diverse team of an army of copywriters, programmers, designers, data analysts, producers and account managers. We almost created our own start up within the agency to make the project come to life.

LBB> Rombot will be fully stepping into his role in early 2017 - what can we expect from that?

Ioana> Rombot is gathering data from Romanians at this point. All answers to all the questions someone might ask about our country when visiting or when simply wanting to know more. We want to make sure the answers are as accurate and specific as possible, to give a real local alternative to a biased search engine result you might find when you search for Romania. Foreigners will be able to ask the Rombot anything they’d like to know about the country and the Rombot will give the answer that the majority of Romanians have considered right.

We are also considering taking the Rombot to international tourist fairs, allowing tourist agencies to use the tool and – why not – propose it to embassies across the world.

LBB> As well as helping the brand ROM, Rombot should also help change foreigners' perceptions of Romania - what are you hoping visitors to the site will learn about the country?

Ioana> You can only truly learn about the country when you talk to a local. But even that local is subjective, may be biased and may not represent who we are as a country. Rombot should talk, act and portray the values of a true Romanian, with data collected from everybody. So when you interact with it, you will be able to find all information about the country – whether it’s tourist information, local insights or key facts about what Romanians like or hate, or about how to interact with one. The Rombot will cover different aspects of our lives so you will probably be able to find everything you want to know about us.