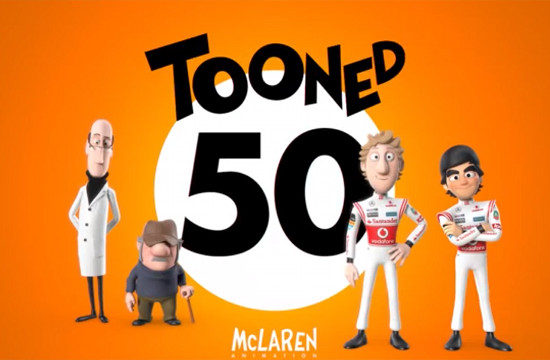 Framestore and Formula 1 legends McLaren have been revving up racing fans with their series of cartoons ‘Tooned’. The unlikely partnership evolved following a chance encounter at a netball match, of all places, and since then Framestore have been collaborating closely with McLaren to develop the cartoon universe. This year is McLaren’s 50th anniversary, so with the latest series Framestore has been pulling out the stops with racing stars of the past and present. LBB’s Addison Capper caught up with Executive Producer, Simon Whalley, and one of the series’ two directors, Chris Waitt.

LBB> How did the relationship with McLaren initially come about?

SW> On a netball court! The Group Brand Director of McLaren, John Allert’s daughter goes to school with the daughter of Mike McGee, who is the founder, creative director and one of the owners of Framestore. While they were watching their daughters play netball the ‘what do you do?’ conversation cropped up. At one point John said, “I’m thinking I’d like to do something with Jenson [Buton] and Lewis [Hamilton] and animation, is that something you would be interested in?” To which the answer was “yes”, and that’s how the whole thing began.

LBB> Could you tell us a bit more about how the relationship works?

SW> The relationship is very strong. The key to it is that at the top there is a very small group of people who have a lot of mutual trust for each other: John Allert, Ron Dennis himself, William Sargent our CEO, myself and Chris and Henry the directors. That’s the core team of people who ultimately make the decisions.

CW> My theory is that with most good things, no matter how big or small the project, there’s an optimum number of people to make decisions, which tends to be four or five people. If that’s balanced right, everything flows from that.

LBB> For Tooned you’re working directly with the client, something we’re seeing more and more. What benefits do you feel that this brings to a production?

SW> It’s a very efficient communication chain, it means that because we have control of the entire budget we are more in control of how and where we spend it to get to the end result. It also means we can do it quicker.

LBB> When you came up with Tooned, what kind of audience were you hoping to appeal to? And what has the reaction from fans been like so far?

CW> We said from the beginning that it wasn’t just for adults and F1 fans, and that it wasn’t just for kids either. We didn’t want to label it. It sits in what tends to be called the family slot alongside things like The Simpsons and the Pixar films. More specifically, the classic image of our audience would be a dad and his son watching a Formula 1 race, but obviously mums and daughters, teenagers and everyone else is interested too. We always throw in some jokes that are there specifically for adults, about the history of Formula 1, about Nigel Manson’s moustache or James Hunt’s jock strap for example, and similarly there are jokes that are just pure slapstick that will appeal to young kids.

SW> The response from the fans has been very warm and positive and a lot of people have identified it as an entry point into Formula 1. It’s good for the sport in general, not just for McLaren.

LBB> It’s the 50th anniversary of McLaren – how is Tooned planning to celebrate?

CW> This year, because of the anniversary and because they have such a rich heritage, we just felt it was a golden opportunity to take the show to another level and make use of all these incredible figures from the past. That list includes Bruce McLaren himself and a whole host of world champions: Emerson Fittipaldi, Alain Prost, Ayrton Senna, Mika Häkkinen, James Hunt. These are all really strong characters on and off the track. They are all legends within the sport so we wanted to turn them into cartoon characters and have some fun with their stories. We’ve made an extended comic celebration of the history of McLaren, with a continuing story, so at the end of the year we can put them all together into one long piece to be released on DVD.

LBB> What was it like to work with the racing stars and did they like being turned into cartoons?

CW> It’s always fun to meet these legends and they bring their character very much to the table. They’re generally very up for having a bit of fun, whether it be the drivers or, in the cases where they are sadly no longer with us, their close relations. For Senna we have his nephew Bruno doing his voice and for James Hunt we have his son Tom.  They all seem to throw themselves into it, they know that we love the sport and they can tell that it’s lovingly done. There have been a few moments where we have wondered if they would accept what we’ve done with their stories. In the case of Emerson Fittipaldi we decided to have some fun with his famous sideburns and say he was secretly a werewolf – we didn’t know if he would go for that. As it happens his wife was more concerned that we didn’t make his nose too big!

SW> She’d seen what we’d done to Jenson’s nose! Emerson was feeling a bit rough with a cold actually, but within ten minutes he was screaming, shouting and howling like a werewolf. He obviously enjoyed it and he’s been tweeting about it since.

CW> Everyone’s been very welcoming. For the Alain Prost episode we went down to his house in Provence and recorded him there. We had Bruno Senna come over. They all just absolutely loved it. Murray Walker was also very happy to do it.

LBB> What can we look forward to in the future from the Framestore-McLaren partnership?

SW> The similarity between Framestore and McLaren is that they always want to better themselves. For companies that do completely different things we’re very similar in mindset.

There are all sorts of opportunities. Now that we’ve established that you can tell quite a lot of different types of stories through the Tooned lens it opens up a lot of things including merchandise, toys, games. Suddenly we’ve got a wealth of characters and a look and a style that would work so well on all sorts of different platforms. Our ambition is to make a feature film.

CW> We’ve realised that for the amount that a brand might spend on a big campaign which might come and go within a couple of months, there’s actually enough to make a whole feature film perhaps, which could be around for a while – something that people can keep coming back to.

SW> Our approach is that we’re just making a good show, but clearly this is actually branded content and the nature of its success means there’s a really good opportunity to do some really cool, inventive stuff in the future. It’s a new way of looking at broadcasting.

LBB> We hear that there’s a particular shot in your latest episode, The James Hunt Story, which inspired a lot of debate within the team. Something about a sexy wink…

CW> This was the shot that we debated the most, as there was a lot of talk about which eyebrow was raised, which eye would wink.

SW> It’s safe to say in the entire history of us working on Tooned, this shot and the talk of eyes winking is the most heated it’s got. That’s how much we care about the laugh. That’s how much we want this to be good. There was an awful lot of winking. Very, very serious conversations about what we think is right, while winking at each other and still trying to remain stern, is quite difficult, as it transpires.

CW> There are some other things we tried to do with it to. We’re always looking for period detail, whether it’s real or as that period is remembered through films. In episode two it was sepia and set in New Zealand. Episode three was a horror film pastiche. This one we went for a Bond style caper, in particular in this shot we’ve gone soft focus, which is something I don’t remember seeing in a CG thing before. They used to do it with Vaseline on the lens.

SW> So what we did was to put Vaseline on our crew.