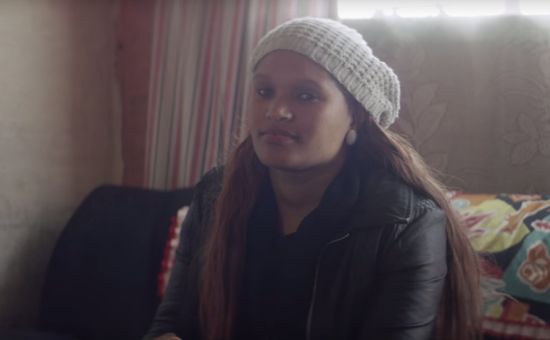 Young women in sub-Saharan Africa are twice as likely to contract HIV than men. But it’s no coincidence. The rate of the infection in the area is an ugly knock-on effect of the daily tribulations that these women face. Nicolet Oliphant is one such woman. At the age of 14 she was pressured into having sex with her boyfriend, who was six years her senior. She was unaware that he was HIV positive. By the age of 17, and unaware of her illness, Nicolet fell pregnant and her boyfriend left her. She decided to get tested for HIV when she fell ill three years later, and sadly both her and her son were positive.

Production company Maverick.NYC recently headed to South Africa, along with The Global Fund, an organisation that invests nearly $4 billion per year to accelerate the end of aids, tuberculosis and malaria. Their aim was to capture Nicolet’s story and also to send out a message of empowerment. German actress Diane Kruger joined them on the journey.

Also be sure to read about Diane’s journey to South Africa here and view the film below.

LBB> You really wanted to break the stereotypes of how this type of film usually looks – what kind of techniques did you use to help you do that?

G&J> From the start we knew we wanted to get as far away from the usual documentary aesthetic applied to these types of projects. It’s tempting to go the route of sticking with a single zoom lens. We decided to go with primes and take the hit on the time it takes to switch from lens to lens. We had an amazing DOP, Josh Mckie, who was really open to going down this route even though it meant a lot of extra work from his side. We managed to get the new Cooke anamorphic primes, which produce an incredible image and helped us to create the cinematic look we were after.

LBB> And how did you go about breaking those stereotypes with the film’s content? Were you in charge of the whole script?

G&J> Our biggest hurdle was how to tell the personal journey of Nicolet, whilst framing it against the wider HIV / AIDS story. We arrived at the TV stock technique as a devise to get around this, punctuating each of our location shots with a moment to tell a snippet of related information. This would be in the form of a news report or radio piece in the background, remarking on a significant milestone in the fight against HIV / AIDS. We also worked alongside The Global Fund on all the script elements, creating a solid, well-researched list of questions for Nicolet to answer. Her answers formed the structure of the finished piece, and all of the other elements were built around her central story.

LBB> Tiffany, can you tell us a bit about the Global Fund and the work it does?

TM> The Global Fund is a 21st-century partnership organization designed to accelerate the end of AIDS, tuberculosis and malaria as epidemics. Founded in 2002, the Global Fund is a partnership between governments, civil society, the private sector and people affected by the diseases. The Global Fund raises and invests nearly US$4 billion a year to support programs run by local experts in countries and communities most in need. To date, Global Fund partnership programs have saved an estimated 17 million lives.

LBB> I think the HIV issue in sub-Saharan Africa is a much bigger issue than many realise - just how bad is it?

TM> While HIV prevalence and infection rates have declined in the region as a whole, sub-Saharan Africa is still the hardest hit region when it comes to HIV, and adolescent girls are being left behind. For example, this week in South Africa, more than 2,000 young women and girls will be infected with HIV.

LBB> Greg and Jacob, how aware were you guys of the issues before you got involved in the job?

G&J> We had a pretty extensive research period leading up to the trip, but you learn so much from being on the ground and spending time with the nurses and patients. Statistics are easy to recite, but it’s the nuances of the problem that become apparent only when you’re immersed in the situation. For obvious reasons it was very difficult to get access or preparation time with our subjects on site. The Global Fund sent a great team out to Cape Town a few weeks before the shoot to meet with potential subjects and conduct preliminary interviews. This helped us get a sense of what we would be focusing on when we hit the ground.

LBB> How did working on it affect you?

G&J> The strange thing is that at the time, your mind doesn’t allow you to indulge in negativity. We were trying to achieve so much in what was an incredibly tight schedule that we almost couldn’t afford to stop and think for too long about how bad this really was. That sounds kind of cold, but maybe it’s a defence mechanism – you’re there to do a job, and if you dwell too much on what’s really an appalling situation, it will be to the detriment of the film. As a result, it was only after the trip that we were able to decompress and take it all in. That was a really low period, but we’re not complaining – Nicolet doesn’t have the luxury of ‘decompressing.’ She has to live her life and deal with her struggle every day in the best way she can.

LBB> For those that haven’t yet seen the film, Nicolet is HIV positive mother from South Africa, who, when she was 14, was pressured into having sex with her boyfriend, six years her senior. How was it telling her story? How did you go about making her feel comfortable enough to tell her story?

G&J> She was really amazing and incredibly comfortable from the outset. It felt like she just wanted to get the story out there, so that positive steps could be made. She was deeply involved with educational initiatives in her community, becoming a spokesperson of sorts. We felt like this film was a way in which she could share her message with the next generation of HIV / AIDS sufferers.

LBB> Why was Diane Kruger a perfect ambassador for The Global Fund?

TM> Diane Kruger is passionate about making a difference and determined to contribute her voice to the cause. We knew she would be an eloquent and influential ambassador.

LBB> And how was actress Diane Kruger to work with?

G&J> It was great to have Diane on this. This whole process was a real journey for her, as she was experiencing many aspects of the HIV / AIDS situation in South Africa for the first time. While it was important to be part of that process, we were also mindful not to focus on it too heavily. For us, this was always primarily Nicolet’s story.

LBB> Tiffany, what were you thinking when you first saw the film?

TM> We were moved and happy to see this story. It’s a powerful story that needs to be told. It’s representative of the experiences of so many young women.

LBB> How was it working with the guys at Maverick? How did they first get involved in this project?

TM> The team at Maverick is creative, flexible and dedicated to telling these stories in a powerful and inspiring way, which is the reason we wanted to work with them. It turned out to be a great fit.

G&J> The security issues proved very real. The locations where we were shooting are some of most dangerous communities in the world outside of war zones, so we had to be extremely careful at times. We had an amazing security team who made sure we were safe, but we had a few hairy moments.

LBB> Can the epidemic be beaten do you think?

TM> The situation is improving and we are moving in the right direction towards ending the HIV epidemic, thanks to the dedication and hard work of partners. In countries where the Global Fund invests, AIDS related deaths have been reduced by 40 per cent.  Globally, in 2005, only four per cent of people living with HIV had access to treatment – today, more than 40 per cent have access.

G&J> We were struck by how multi-faceted this issue is. There really is no one simple answer – a fact that The Global Fund has identified in the huge variety of programs and partnerships they support. What we do know, however, is that nothing will be solved until some semblance of gender equality is achieved in South Africa.