Behind the Work 852 Add to collection 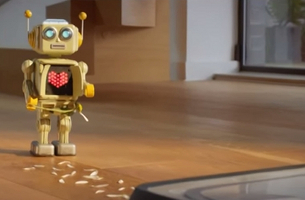 Housework really ain’t the most romantic thing on the planet. That was until Vorwerk went and sexified it up with the launch of the Kobold VR200 robotic vacuum cleaner that pretty much means you don’t have to actually do housework! And the robot in this uber charming film (check it out at the bottom of the page) by Saatchi & Saatchi Düsseldorf and Smuggler’s Jamie Rafn could not agree more. The little fella falls head over heels for the newest member of the household – and Saatchi’s and Rafn have somehow imbued an adorably amusing sense of passion into these seemingly inanimate objects in such a way that the film will have you longing for the dinky robot to get his girl from the off. Saatchi & Saatchi Worldwide Director Film and Content Andy Gulliman and director Rafn told LBB’s Addison Capper how they pulled it off.

LBB> Why did the brief from Saatchi’s appeal to you in the first place Jamie?

JR> I was immediately charmed by the idea. It was a WALL-E-esque love story between an old toy robot and a state of the art vacuum cleaner - what’s not to love?!

LBB> What was involved in the pre-production and research?

JR> We had to work out how the toy robot would move. Initially it was thought that we should probably do everything in post. In hindsight it was actually a great thing that the budget didn’t really allow for this as it necessitated us thinking more creatively about this. We all wanted the robot to move like a robot of this kind would - i.e. to be limited with its capabilities. It’s part of what gives the story its charm - the fact the she (the Vorwerk) is out of his league. So we looked into how we could move the robot in camera using a combination of internal remote controlled robotics and puppeteering.

LBB> Who did you work with on the design of the robot?

AG> It was a true collaboration. Alexander Reiss, the ECD at Saatchi & Saatchi Dusseldorf, was very detailed on his design of the little chap. John Pallant added his thoughts to Alexander's concept, then Jamie Rafn added the final master strokes. The brief became a detailed wish list that was handed to Chris Lloyd, the model maker. Chris brought the 2D drawings to life and built the mechanics to allow the subtle movements that deliver our robot’s character and his feelings towards the workaholic German over-efficient vacuum cleaner.

JR> Our production designer Ged Clarke helped us compile a load of excellent reference images, which we sent to a concept artist called Kevin Hunter. He mocked something up that was pretty close to the final design. Once we’d finished tweaking the design - a few hundred times! - it was sent to Christopher Lloyd, who is a brilliant prop designer.

LBB> How tricky was it for you and the team to inject that feeling of compassion and love into the robots?

AG> The vacuum has its own character as soon as it's out of the box and switched on. It doesn't stop until the job is done. The trick was to deliver the feeling in the build and movement of our robot and the camera angles etc.  Jamie was all over the character’s movement and the edit. His storyboard expressed the little clockwork fella’s feelings. And the finished film is his storyboard.

JR> That was a big part of the challenge. Every element was deployed - from the design of the robot (for example getting the size of the eyes right), to finding a face on the Vorwerk (which was the three sensors at the front), to the way we tilted the robots head (sideways for curiosity, down for sad). Also the cinematography from the amazing Tom Townend was key - rainy overcast weather when the robot is at its lowest ebb gives way to glorious sunshine as he finally sees the vacuum reciprocating his affections.

LBB> What kind of tricks were used to imbue the robot’s movement?

AG> The robot’s movements were mostly delivered in camera. A very traditional shoot. Post production was used to remove the wires and sticks used by the puppeteer and to add subtle eye movements.

LBB> Why was Jamie Rafn the right man to shoot the spot?

AG> His treatment grabbed the emotional intention, the character and the narrative and its sense of fun. He had tough competition and we had an embarrassment of riches with some great directors shortlisted, but Jamie's treatment put into words all that we wanted. Smuggler gave us such amazing support with the production and all that was needed. The combination of Jamie's reel, his words and Smuggler put him as our recommend.

LBB> How was the shoot as a whole and how long was the project from start to finish?

AG> The shoot was intense. The scale of the production was far greater than just the film being showcased. Smuggler delivered the main film, all the cutdowns, all the product films, all the country versions and all the quality that we needed. The versions are still being delivered and we've had to keep Electric Theatre Collective working nights and weekends to deliver all the requests in all the territories. The little fella has created a quite a demand.

JR> It was an extremely long and busy two days! As well as shooting the main film we had a tonne of product films we had to make, so we had two sets running concurrently!

JR> The biggest challenge from the start was to try and get the audience to care about these two inanimate objects. Added to that - as ever - was the incredible time pressure we were working under. The robot had to be designed and constructed within two weeks! Thanks to the genius of all those people I have mentioned, as well as my producer Ray Leakey, the agency, John Pallant and Alexander Reiss at Saatchi’s, who were an absolute joy to work with, my editor Mark Edinoff, and too many others to mention, I can genuinely say it was one of the most enjoyable shoots I’ve done in years.

AG> This creative idea and execution was born out of a request for 'product films’ - the biggest challenge was to ensure the creative idea was delivered and all the product requests were delivered, and all were educated in the potential of this production process.