Your Shot: How UEFA Plans to Make Women’s Football the Number One Sport in Europe

FCB Inferno, Nexus director Kibwe Tavares and UEFA’s Peter Willems on a team effort to get girls into soccer 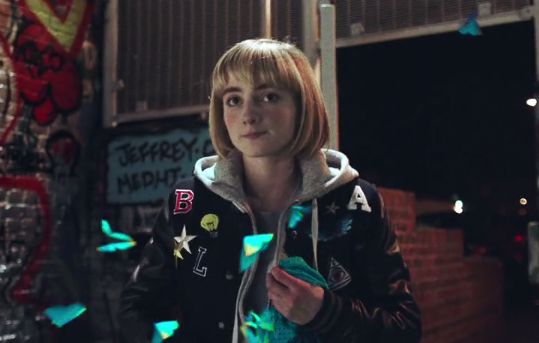 Let’s be honest. Whether we like it or not, football has long been considered a ‘guy’s game’. Rough and tumble on the pitch, boisterous chants, jumpers for goalposts and all that. Yet over the past few years, Women’s Football has been growing in popularity steadily across Europe and the US.

With the goal of making football the number one played sport for women across Europe within five years, UEFA teamed up with FCB Inferno to tackle misperceptions surrounding the sport with a punchy, inspirational campaign directed by Kibwe Tavares.

LBB’s Liam Smith caught up with Peter Willems, Head of Marketing Activities and Sponsorship at UEFA; Kibwe Tavares, director at Nexus; and the FCB Inferno creative team to find out more.

LBB> What is the main objective of the #WePlayStrong campaign? Why is now the right time for this kind of movement?

Peter Willems> The main objective of the Together #WePlayStrong campaign is to increase the number of girls playing football and reduce dropout rates. Our ambition is to make women’s football the number one sport across Europe. The time is right because everything is coming together in terms of the growing participant, spectator and commercial interest in the women’s game as well as a cultural backdrop in which gender equality and female empowerment are high on the agenda.

LBB> How long have you been working on the campaign?

PW> We launched our commitment to this campaign at the 55 National Associations in May 2016. Since then we have carried out the academic study with the University of Birmingham to prove the link that playing football increases girls’ confidence and self-esteem. We have also been getting the support and backing of a growing number of national associations. The creative development itself began six months ago.

LBB> There's an extensive amount of research behind this project. Was there anything shocking/surprising you uncovered from the results?

FCB Inferno> We used qualitative and quantitative research as well as a psychological understanding of teenage girls and the academic study with the University of Birmingham.

Perhaps the most surprising thing is the sheer number of girls whose confidence is positively affected by playing football.  80% of young footballers feel more confident as a result of playing in their team.  This is the unique strength of football and this is what lies at the heart of our campaign.

LBB> There's very little UEFA branding throughout the campaign, is this intentional?

PW> This is completely intentional. It is critical that we attract teenage girls by speaking to them in a language that they understand and in a way that they find inherently cool.  UEFA isn’t currently a brand that teenagers identify with or find cool.  This is also a campaign designed to be taken and owned by the National Associations of the 55 member countries.  The campaign therefore needs to be seen as endorsed/powered by UEFA but needs to work independently of the UEFA branding and also allow for the National Associations to fit their endorsement at a similar level to the campaign.

LBB> Why was Kibwe Tavares the right director for this project?

FCB Inferno> Kibwe is an exciting up and coming talent and we admired his previous film work for Guinness. His treatment on our script was fresh and vibrant and brought the youthful energy we were looking for. He also has extensive experience with integrating animation into film through his own studio, Factory Fifteen

LBB> And Kibwe, what was it about the initial brief that caught your eye?

Kibwe Tavares> I just thought it was going to be a cool project. That visually, we would make it really interesting.  Each year there are massive football campaigns and so much content aimed at men and there isn’t much for women.  I felt that was a big opportunity. Also it was selling a sport, not a product, and I got behind all that.

LBB> The use of Tiltbrush as a prototyping tool is fascinating. What did it give you that traditional methods couldn't? Was this your first time using Tiltbrush in such a way?

KT> Tiltbrush gave us an illustrative quality to the design and was a liberating experience. We could have sketched and made it in 3D but you couldn’t get the same flexibility and speed with testing ideas.  It allowed us to dive in to the material and it allows the artists to get closer to the final piece.

KT> It was really good, in the UK we worked with McAuley Walters Casting and we went to local teams like Boiler Room Ladies FC and Hackney Laces who helped to introduce us to load more teams.  We did an open casting, we looked at different ages, from 11 to mid 30s, and we tried to cast people who played football, wanted to play football and were interested in football at all skill levels.  There was a lot of positivity and a lot of people wanted to be a part of it, there was a good feeling around it.

LBB> How did you make sure the look and feel of the film would appeal to teenage girls without being in anyway patronising or alienating (because I think you've done a really good job of making sure it's not 'girly' whilst being bright and eye-catching)? Was that a concern for you?

KT> Yes it was. It was a fine line because you can’t ignore the fact that it’s a football ad for girls and it needed to have its own language but equally you can’t underplay the football itself.  It was a conscious effort to find the tone.  The combination of the friendships, the confidence that football gives, it was just being honest about it that worked.

LBB> What was the most interesting thing about the production for you?

KT> Discovering women’s football. I didn’t know anything about it before. The Boiler Room girls love football, they love each other and they love the game and being around that passion was amazing.

LBB> I love the soundtrack for the spot. Who did you work with to find the right track, and why was it the right one?

FCB Inferno> We collaborated with Leland Music from a very early stage of the campaign to find a track that would take our film to the next level. We deliberately avoided a well known established track so as not to date the campaign. With our young audience, it was important to create a new soundtrack for girls’ football.  The catchiness and driving tribal beat of Leo Justi & Brazabelle’s  Swipe It Off (feat Zanillya) delivered the strength and character we were looking for. The track has been released to coincide with the launch of the campaign.

LBB> What other pieces of content can we expect to see over the coming months?

FCB Inferno> We have a full 12-month content plan across all the social and digital platforms where our target audience of girls aged 12-17 years old will be. As the campaign is pan-European, the content is highly visual using emojis, stickers and GIFs in a fun and playful way. Examples of the type of activity include:

• Sticker Snap creator on the website encourages girls, ambassadors, influencers and players to decorate their own images with our campaign assets and stickers

• 40 GIFs have been created and available to use and share via Giphy; a mix of skill content and reactionary GIFs

• Content films that have been designed to appeal to girls at different points in the year (e.g. School holidays) will be shared over the next 12 months to keep the campaign fresh. These will focus on our strategic pillars of Skills and Togetherness