Your Shot: How This Short Film Flips The Sci-fi Genre on its Head 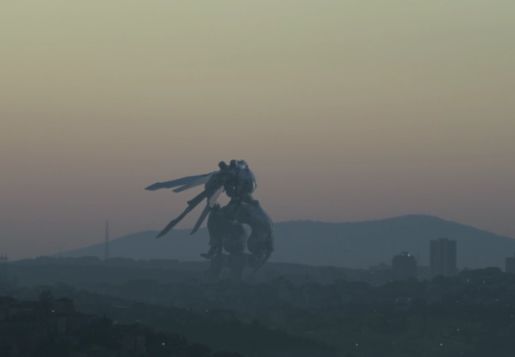 Ever since the days of King Kong and Godzilla, we’ve come to expect certain tropes from the ‘big monster in a big city’ formula. But what if the intruder didn’t actually destroy or attack anything? In fact, what if it didn’t even seem to acknowledge the existence of humans? That’s the question asked by director Brent Bonacorso in the fifteen minute short, ‘The Narrow World’.

Taking its cue from the mockumentary style of ‘District 9’, ‘The Narrow World’ uses the arrival of a mysterious alien named ‘The Visitor’ as a way to explore human nature through three characters’ reactions.

LBB> Can you tell us a bit about how this project came about?

BB> As with most ideas, it came to me in a flash, a single image that defined the concept. I was riding my bike along the beach in Venice, and suddenly saw a giant Kaiju as big as a skyscraper sitting on the sand, gazing out at the sea. Not directly threatening, not exactly friendly either, with a mutual understanding with all the tiny humans around it — we don’t really understand each other at all, and probably never will. Suddenly I knew why he was here, and what it all meant. I quickly sketched the image, and the story followed.

I was really intrigued by the idea of subverting the traditional alien invasion story, and using that as a way to explore how we interpret the world around us, and how our subconscious mind invisibly directs our behaviour. The creature in this film becomes a blank canvas onto which the human characters project their innate desires and beliefs, its mysterious nature revealing more about the characters than the actual creature itself.

LBB> I'm definitely getting a strong District 9 vibe – what other sci-fi films influenced you?

BB> Honestly, not many on this particular project. I grew up watching Godzilla movies as a kid, and absolutely loved them. The craft that goes in to them, the bad dubbing, the concept of this giant monster that transcended a simple animal, and became a literal force of nature. Godzilla, of course, was a metaphor for the nuclear bomb. The best monsters are always metaphors, either for an outside force, or for an aspect of the human condition. The latter is what inspired me here; the subconscious mind that drives our actions by brute force, but that we’re most often completely unaware of. Something that feels alien to us, an incredibly powerful outsider that lives within us.

LBB> What inspired you to create an alien that was so passive?

BB> I was drawn to the idea that we find ourselves so important — both as a species and individually. Humans are the undisputed masters of the planet — so what would happen when something appeared so much bigger than us in every sense, something invulnerable to our hostility? How would we react to being ignored by it, made to feel so insignificant? The lack of direct response and interaction from the alien is exactly the catalyst that drives my characters, makes them seek answers that lead them down these unexpected avenues.

LBB> Why did you choose to go with the faux-documentary style?

BB> I was drawn to the immediacy of it, its subversion of our expectations in a fictional narrative. The documentary style allows for a completely different understanding of the characters, something not quite possible in traditional narrative.

LBB> Who was responsible for the design of The Visitor? How much input did you get to have?

BB> The overall design of The Visitor was created by a very talented French graphic designer, Olivier ‘Zamak’ Bucheron. It was then textured by Eric Smit, of Luxembourg, and finally lit, animated, and composited by myself. I wanted the look of the alien to perfectly reflect his demeanour; neither directly threatening, nor overtly friendly. Possibly mechanical, but with forms and textures found in nature. Unknowable in a way, but with a certain fundamental innocence. I think the one big eye really captures this.

LBB> What were the biggest challenges during this project and how did you overcome them?

BB> The biggest challenge was taking on all of the visual effects work basically by myself. I didn’t want the editor (genius Jack Pyland) to be constrained by the traditional pipeline of ‘effects shots’, which are usually as few as possible to conserve resources. I wanted him to be able to draw from a huge pool of footage, both practical and CG, to create this dreamy stream-of-consciousness, non-linear story. So I ended up creating a massive archive of ’shots’ of the alien that never even ended up in the film, but which gave the editor a lot of freedom and options.

LBB> How has the reaction been to the film so far?

BB> Overwhelming. It seems to be resonating with a lot of people, creating a lot of discussion… which as a director, is amazing.

LBB> And finally, what's next for Brent Bonacorso?

BB> I’m just in the process of wrapping up post production on my feature film YOU GET ME, starring Bella Thorne, Halston Sage, and Taylor John Smith for Dreamworks and Awesomeness Films, which will be getting a huge push out into the world very soon.