Your Shot: How This Deutsche Telekom Mobile Game Is Helping Alzheimer’s Research

Behind the Work 572 Add to collection 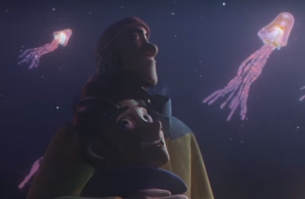 For many living with dementia, one of the first symptoms they experience is the loss of spacial awareness and the ability to navigate through well-known places and environments. To aid scientific research in the field, Saatchi & Saatchi London and Deutsche Telekom have collaborated with scientific researchers from University College London (UCL) and the University of East Anglia, and game developers Glitchers to launch ‘Sea Hero Quest’, a multi-platform mobile game that collects data on how players, of all ages, navigate. All data collected from the game will be made freely available to scientists worldwide and will also be used by UCL, one of the world’s leading dementia research facilities, to develop new diagnostic tests for dementia. If 100,000 people were to play the game for just two minutes, they would generate the equivalent of more than 50 years of similar lab-based research.

LBB> This is a huge project with a lot of people involved - how long has it been in development?

WJ&FG> It’s been a year in the making, which when you have an insight into the technical challenges involved, is pretty amazing.

LBB> And this is probably an incredibly complex question - but what kind of research did you have to undertake for it?

WJ&FG> We teamed up with leading experts in the field of dementia - from universities across the world, to journalists and charities - to find the problem that these researchers needed to solve most. A special shout out should go to Dara Mohammadi, a science consultant, who played a key role in bringing the team from Wellcome, UCL, UAE and Alzheimer's UK together and helping us all understand what we were getting into.

LBB> How many iterations did the idea go through before you ended up at this?

WJ&FG> It was clear from the outset that we wanted to exploit the 3 billion hours people spend gaming each week (globally), but the focus of the idea did shift from citizen science (e.g. analysing brain tissue cells from dementia patients to speed up that analysis process), to something more revolutionary; allowing everyone to participate in a multi-layered navigational experience to generate brain data that could be used over and over again, creating a global benchmark for how people navigate. Something that has never been done before.

LBB> When you first began working on it, did you ever imagine it’d be such a complex project?

WJ&FG> It was a hugely ambitious project from the start but when you set out to do something that has never been done before you can’t predict what challenges you'll face next. And they come from all angles, especially when you’ve got tech, science, data, security, game development, film and campaign assets, all dependent on each other for the project’s success.

LBB> Did you ever worry about its feasibility?

WJ&FG> Not really, because we had so many experts in their own fields. Although the day Glitchers showed us the game working for the very first time did feel like a little miracle.

WJ&FG> It was a hugely collaborative experience and everyone was very respectful of each other’s expertise. We worked with Glitchers on the game and with BUF on the backstory and then ideas were fed one into the other really seamlessly. The scientists worked very closely with Glitchers, feeding their experiments into the developers, who were tasked with creating a bespoke system to capture the data, and all the while keeping it fun and challenging. This was a reciprocal process that continued right up to launch. Everyone was very nimble, trying to incorporate ideas to improve the story, the science and the user experience at every point.

LBB> What kind of data does the game collect and how can scientists access and use it?

WJ&FG> As you navigate your way through each level, information about how you navigate is collected, without interrupting your game play in any way. At the end of each session, anonymous navigation data is collected and sent to a scientific database. For players who wish to provide more in depth information to add value to the research data, there is the opportunity to enter info on sex, age and which country you live in. All of this data is anonymous and will only be collected if you enter your details. This is not required to play the game. You can opt-out in the settings menu at any time. When using the app, servers temporarily record the IP address of your device and other technical features. This data is erased after each Internet session and will not be linked to the in-game data.

After the data is collected it will be accessed by UCL scientists who will extract and analyse it. Other scientists can request permission to use this data, because this database is relevant for scientists working on dementia research around the world. Sea Hero Quest will generate the largest ever crowd-sourced global benchmark for how humans navigate. This database will help us identify the brain’s capacity for orientation/spatial awareness on a mass global level, creating a global benchmark of normal, unaffected people. The development of such a benchmark is widely acknowledged as one of the key steps towards developing new diagnostic tests for the diseases that cause dementia. Improving our ability to detect the earliest signs of the disease will play a key role in effectively deploying new drugs and managing the disease. These will offer some hope of being able to slow the effects of Alzheimer’s (the most common cause of dementia).

Sea Hero Quest is not a test for dementia, nor is it designed to be played by those who have the condition. It has been designed for people of all ages to play, providing scientists with data on the average human brain's ability to navigate.

LBB> What inspired the story of the sailor and his son? Why was it an appropriate link to the overall message?

WJ&FG> We wanted to create an emotional backstory to the game. The scientific data ensured that we needed a game based around navigation, so the developers came up with the boat as a vehicle for this. But we wanted to create more of a connection to this boat, and link it to the disease itself. So we came up with the idea of a sea explorer who has dementia and who slowly loses his memories. His son then sets out to save them. As the film and the game developed at the same time, we were able to build this emotional story into the game as well.

LBB> It’s a real meeting of creativity and science, coming together to do good… what do you think this project says about the ad industry today and its capabilities?

WJ&FG> We feel that in this day and age, it’s not enough to say you create good products. You’ve got to do more than that. To commit to doing more about the things that your consumers care about, and therefore connecting your brand to something bigger and more meaningful. As an industry we are definitely getting better at collaborating with others in order to do this. Knowing where our areas of expertise stop and where and when we should create great partnerships for greater impact is key.

LBB> What were the trickiest components when developing this project and how did you overcome them?

WJ&FG> The biggest challenge was striking the right balance between obtaining valid science/data and the end user experience. We wanted this game to be fun, first and foremost. There’s no point in creating something that is worthy if it’s boring. We knew that if it didn’t have mass appeal, we wouldn’t get the reach we needed to create a global benchmark for how humans navigate.

LBB> What have been the most memorable moments?

WJ&FG> Seeing the game working for the first time as it captured navigational data from users, watching the launch trailer come to life in Buf’s Parisian studio and learning from world-renowned experts in the field of dementia about the scale of the problem and experiencing their hope and enthusiasm for this project get bigger and bigger.

WJ&FG> Please play the game. It’s a game for good. And it’s proper good too.