Your Shot: How the White House Turned Every Dollar Bill into an Interactive Holiday Card

Behind the Work 1000 Add to collection

As the Obamas prepare for their last Christmas in the White House, Nexus Interactive Arts created a very special augmented reality project 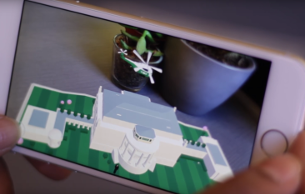 In times of rapid change and seismic disruption, symbols of continuity are more important than ever. And in the USA, The White House is one such symbol. Home to 42 of the 44 American presidents, it has withstood wars and crises and times of triumph – and whatever your views on the US election, the White House is an enduring institution that transcends the four-yearly comings and goings.

As the incumbent President, Barack Obama, prepares to move out, the team at the White House are reaching out to the American public with a very special festive message. Working with Nexus Interactive Arts, they have turned every dollar bill into an interactive holiday experience, allowing Americans (and non-Americans!) to witness a year in the life of the White House.

The app, 1600, is named after the White House’s famous address: 1600 Pennsylvania Ave. It can be downloaded onto Android and iOS devices, and projects a miniaturised version of the White House onto a dollar bill using augmented reality technology.

It was created by Nexus, who caught the eye of the White House digital department after the success of their New Yorker AR project. Given there are around 11.4 billion dollar bills in circulation, 1600 looks set to be Nexus Interactive Arts’ most large scale augmented reality project to date.

LBB’s Laura Swinton caught up with Luke Ritchie, Head of Nexus Interactive Arts, and director Jack Cunningham who designed and animated the experience.

LBB> I hear that the White House team actually approached Nexus, after having seen your New Yorker AR project. What were your first thoughts when you received the call?

Luke Ritchie> It was an email and to be honest, our first response was to check if this was spam! But the contact checked out, so we all got pretty excited.

LR> During the Summer we'd been approached by the White House digital department, who work on new media and citizen service initiatives. They'd seen our recent AR experience for the New Yorker and were inspired to see how they could use the technology to tell their own story. They were impressed by the visual sophistication that was now possible and likewise needed a platform that could be easily viewed by millions of people without expensive hardware. The brief wasn't clear right away, but the intention was always to show the role of the White House in democracy.

LBB> And what was the creative starting point?

LR> We explored different ways we could tell a story with the White House as the focus point. We knew it needed to be factual but we also wanted to make it charming and perhaps even a little cheeky. Early discussions were around how it would be physically executed and then creatively what we wanted to show or do.

LBB> I understand that you originally wanted to do something in or outside of the White House before you landed on the current idea - what was the original thinking and why did you decide to do something that wasn't so physically restricted to one location?

LR> We discussed a range of interesting ways to roll out the experience, beginning with more location specific ideas around the White House building itself. In this current phase of AR you need a "marker" to track the rendered image so we even discussed things like using the building itself as the marker. As the ideas became more cemented it was clear we wanted to reach a larger audience and there simply aren't natural markers that everyone has easy access to.

LBB> This time round you used a one dollar bill as the ‘marker’- which is genius. Can you remember the 'eureka!' moment that led to the dollar bill idea?

LR> We first landed on the $20 bill because it has an image of the White House which we thought would be fun creatively to explore. However, we later moved to the $1 bill as it made much more sense.

LBB> There's a double poignancy to the project as it stands to remind people that the White House is a symbol of continuity and it's also a sort of farewell as the Obamas prepare to move out. How did you deal with working on a project with such historical significance? Did that create any extra pressure (and if so how did you and the team deal with it?)

LR> The project isn't about the President or the current administration, it's really a love letter to the building, aimed at kids - and playful Americans of all ages - to learn about the White House. Having said that, we knew it could be seen as a legacy piece, especially since we wanted to feature the President and the First Lady, and highlight the work they've done to open up the building to be a much more transparent place. So there was immense pressure on the whole team - we remained passionate to the end.

LBB> From a storytelling perspective, the experience follows a year at the White House - how did you come to that idea?

LR> We began by learning as much about the White House and its history as possible, exploring the different directions we could take a story. We obviously understood that there is too much history to fit into a 90 second experience so we decided to take a different tactic and focus on an abstract year instead. Once we'd adopted this story, structurally things began to fall into place, and we started to work with the White House to discuss the iconic moments that we should potentially feature, and how we could inject a sense of charm and delight into the experience.

LBB> And can you talk me through the design of the characters?

Jack Cunningham> We went bold and graphic for the characters, taking inspiration from 1950s – ‘60s Danish wooden toys. Striking the balance between simple and sophisticated. The characters had to be instantly recognisable from quite a distance as the app allows the viewer to explore the experience from a variety of angles, up close or far away.

I think President Kennedy in the Rose garden is my favourite. James Graham, our Illustrator nailed the hair.

LBB> There are loads of cool little Easter eggs - what are your favourites?

LBB> What's really lovely is that the dollar gives the project even more meaning as it puts a card from the White House into everyone's hands... and will also give more people the chance to experience AR first hand. How do you think the project might change the way the wider public think about AR?

LR> From Snapchat's Lenses to Pokemon Go, it's been a big year for Augmented Reality. I'm hopeful that our project does inspire the young breed of content makers to explore AR as a visual storytelling platform of merit. An AR project for the White House using a $1 bill inherently means that it should be seen by a healthy number of people, so perhaps like Pokemon Go did, it can help introduce the technology and creative opportunities to wider audience.

LBB> What were the biggest technical challenges?

LR> AR hasn't generally been considered a storytelling platform, certainly not at a narrative level, so this was a real challenge for us and we're hopeful to see more interactive animated stories being told in AR. From a technical perspective we've done some pretty amazing work to make it look aesthetically stunning, but I'm probably most proud of the team for optimisation. It's unusual to see this level of detail, animation and characters in the same experience - we've really pushed the boundaries for mobile based AR.

LBB> What were the White House team like to work with?

LR> They've literally been the best collaborator. The team is super smart, quick and passionate, it was a total pleasure. I didn't witness a shred of bureaucracy - which surprised me!

LBB> The project really taps into the traditions and history of the White House as an institution - I was wondering whether there was any little fact or insight that you came across in the process of building the experience that has really resonated with you?

LR> One of the key objectives of the project was to simply help remove mystery about what happens at the White House. Transparency has been a key driver for the Obama administration and particularly the First Family. From simple things like seeing the White House with its wings included (most photos only portray the main building where very little government work happens), to Rose Garden press conferences, Egg Rolling on the lawn, to being able to locate the Oval Office!

Foremost I hope it's enjoyed as a creative experience that sheds a little more insight into the building as an institution and its purpose as The People's House.

Answered by Jack Cunningham, Nexus Director, who designed and animated the experience