Your Shot: How Squarespace Journeyed into Fashion with John Malkovich

Behind the Work 535 Add to collection 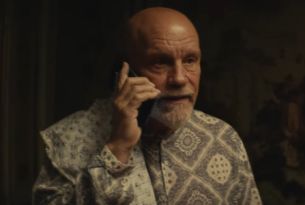 Before all of the award nominations and astonishing Hollywood career, John Malkovich started his career in costume design. And in the latest campaign for website design company Squarespace, we see Malkovich getting back to his roots as he prepares to launch his new fashion label with his website www.johnmalkovich.com.

The campaign continues the superb run of celebrity collaborations from Squarespace, which has previously featured Jeff Bridges recording an album of ‘Sleep Tapes’ and Key and Peele debuting their sports analysis site ‘Real Talk’.

The soulful film, directed by Smuggler’s Miles Jay, sees Malkovich wrestling with the difficulties of moving from acting into fashion, and features a characteristically sublime performance from the man himself.

LBB’s Laura Swinton caught up with David Lee, Chief Creative Officer at Squarespace, to find out more about the film, and why Malkovich was such a natural fit for the Squarespace brand.

LBB> How did the collaboration with John Malkovich come about?

David Lee> We first worked with John while producing a 2016 project entitled Playing Lynch. Through candid conversations and time spent with him on and off set during this process, I learned about John’s real passion for something entirely separate from his acting career.

LBB> Where does John's journey from actor to fashion designer fit with Squarespace as a brand?

DL> John’s story is one that celebrates change, transformation, and reinvention. Just because you’ve begun your career in one direction doesn’t mean you necessarily have to stay the course. Though the public may know John best as an icon of the stage and film, we wanted to highlight the fact that he’s also an incredible entrepreneur and fashion designer. These are the sorts of multifaceted individuals we love to showcase and work with. Squarespace exists to serve these creative, passionate people, and allows them to put their ideas out into the world.

LBB> What was it like collaborating with a tour de force like John? What do you think the Squarespace team learned from working with someone with such singular creative vision?

DL> We’re lucky enough to have actually worked with John twice now, and have been consistently impressed with his absolute dedication to his craft. Whether it’s acting or fashion, John is a committed perfectionist, and having talent like that drives the rest of us to be our best as well.

LBB> In terms of creating the new site, what were you hoping to achieve for John?

DL> What makes Squarespace special is its ability to communicate an individual or business’s personal brand and style via a website. We’ve collaborated with other customers to design websites that best reflect their personal aesthetic, and when creating JohnMalkovich.com, we wanted to channel John’s unique fashion sense and creativity. The clothes really speak for themselves, and we just wanted to give them a platform to shine.

LBB> The film is beautiful – brooding and atmospheric as well as very cinematic! What were you hoping to achieve with it? And what was it like working with such a talented actor 'playing' himself?

DL> Throughout the next few months, we hope to inspire and encourage people everywhere to pursue their passion by making their next move. We wanted ‘Journey’ to capture both the difficulties sometimes associated with chasing your dreams, as well as the reward that can be achieved. One of the coolest things about the experience was that we weren’t creating a fictional story for John – this is really his story and his passion that we’re highlighting, which made the film all the more special.

LBB> The timing of the new campaign is interesting too – the idea of new beginnings and resolving to follow one’s dreams is very much present in peoples' minds at this time of year! How did that figure into the strategy behind the campaign?

DL> Today, it’s easier than ever to explore different passions and change careers (or create your own). At Squarespace, we help the freelancing, entrepreneurial generation by creating the tools they need to make their next move, whatever it may be. We’re proud to have partnered with John to make his next move a reality, and hope that it will inspire others to do the same.

LBB> One of the things that I really admire about Squarespace's marketing is the calibre of high profile creative people you guys team up with – from Jeff Bridges to Key and Peele and now John Malkovich. What guides you as a brand when deciding what sort of celebrities you want to team up with? Have you got any hard rules on this, or is it more of an instinctive thing?

DL> When we begin planning any of our projects, we look first and foremost for creativity in our partners. It’s important to us to work with passionate individuals who take creative risks and aren’t afraid to colour outside the lines a bit. While there’s no hard and fast formula for what makes a good match, we’ve been very fortunate to work with some of the most talented, genuine, and interesting people in the industry.