Your Shot: How Smith & Foulkes Told Wimbledon’s History Through One Continuous Rally

Behind the Work 338 1 Add to collection

Billie Jean King, Venus and Serena Williams, Andy Murray, Bjorn Borg and more feature in a film that crams 140 years of history into one minute of animation 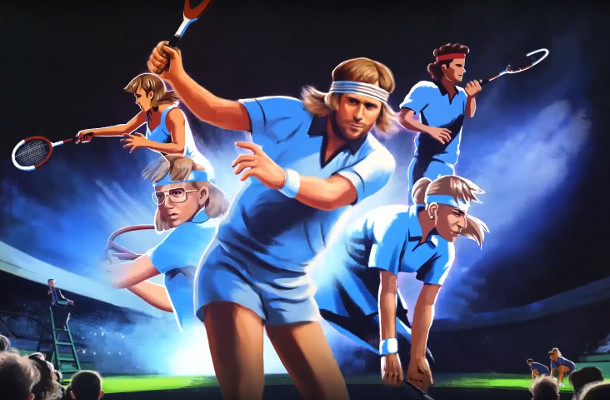 The history of the Wimbledon Championships, arguably the most prestigious Grand Slam competition in tennis, is packed with iconic plays from iconic players. Legends of the sport have been defining their careers there since the first tournament took place in 1877, when it was little more than a gathering in a park. There have been record breaking serves – and record breaking matches, like 2010’s Isner-Mahut match, which, at 11 hours 5 minutes, still holds the title of longest tennis match ever. So cramming all of that into a one-minute film that reflected the changing aesthetics of each era is a bit of an ask.
Thankfully, it’s a task that Wimbledon’s creative agency McCann knew they could trust Nexus Studios’ directors Smith & Foulkes with. Having crafted enchanting animated stories for clients including Honda, the BBC’s Olympic coverage and Stand Up to Cancer, the pair have demonstrated their ability to work in multiple styles and media, all the while maintaining all the dynamism that a film about sport needs.
LBB’s Alex Reeves spoke to Smith & Foulkes to find out how they did it.
LBB> Every illustration / animation style is really distinct! How did you settle on each of them and what were the big inspirations?
S&F> The original concept was to illustrate the history of the Wimbledon Championships throughout the ages, showing how they have grown from a small gathering in a park to the celebrated sacred turf of today.
We initially took inspiration from the history of Wimbledon advertising posters but it quickly became apparent that most of them harked back to the nostalgic pre-war era. So we widened our search, looking at different illustrative styles from each time, particularly those that captured that uniquely British atmosphere so associated with Wimbledon. It was important that each style was true to its original source, rather than a modern reinterpretation of them, showing the fashions and period details of the time.
LBB> Do you have a personal favourite style?
S&F> There is a strong pre-war poster art association with Wimbledon, so it was fun to show it in more unexpected ways, whether it was offset ‘60s screenprints or an ‘80s action poster.
LBB> Which were the most challenging parts to achieve?
S&F> The complexity of a Victorian lithograph does not easily lend itself to animation. So we had to devise a technique whereby components of a single illustration were individually tracked onto a moving body. Thankfully we kept this era quite short. The Billie Jean King shot was also tricky as we wanted this era to be the only one taken from original live action source material. Unfortunately there seems to be hardly any archive footage of close-up players from the ‘60s and what we did find was of extremely poor quality. So we decided to embrace this fact and degrade it even further, turning each frame into brightly coloured screenprints.
LBB> The transitions are amazing! How did you work out the various ways to move between scenes?
S&F> It was important to get a sense of Wimbledon continually changing with the times, so early on we had a long list of historic moments and players that could show the Club's evolution. We then had to work out which illustrative styles could best reflect this. But we didn't want to lose the momentum of the rally, so it had to feel like we are constantly on the move. The challenge was to show details like the pony roller or the scoreboard while still feeling like the rally was continuing.
LBB> The movement is so realistic. Did you model it on real footage? How did you find the perfect moments to weave together?
S&F> We wanted to show the gradual evolution of the game as well as the Championships so each animator studied their character's particular style of play. Obviously there is no footage of Spencer Gore serving in 1877 so we took a little artistic licence with him, but we wanted to capture something of Suzanne Lenglen's athleticism and Fred Perry's languid style, as well as the more aggressive shots of today's players.
view more - Behind the Work