Your Shot: How Player Power Is Lighting Up Football in This Rio Favela

Behind the Work 923 Add to collection

JWT London creatives on bringing science and football together with Shell, Pelé and Pavegen 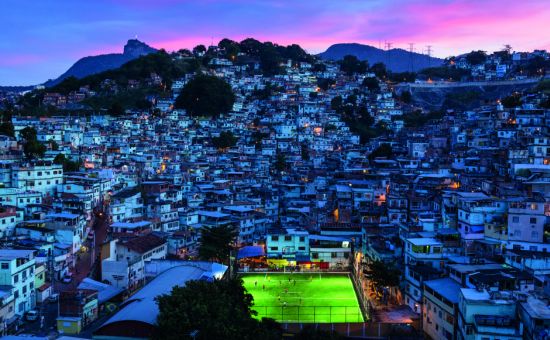 Football is ingrained in Brazilian culture. But despite its five-time World Cup winning national team, Brazil doesn’t benefit from the slick youth sporting set-ups we see in more affluent countries. Favela kids hone their craft on rock-strewn concrete ‘pitches’ and playing after dark gets ruled out thanks to dodgy electricity and a lack of floodlights. Shell recently teamed up with JWT London and Pavegen, a flooring technology start-up that recently won the Shell LiveWIRE awards programme for young entrepreneurs, in a quest to get those kids playing on proper surfaces and into the night. The world’s first ‘player-powered’ pitch was opened by Brazilian footballing legend Pelé last Wednesday in Rio de Janeiro’s Morro da Mineira favela. It consists of 200 underground tiles that capture kinetic energy from players’ movements, which it then converts into electricity for new floodlights, and is a part of Shell’s #makethefuture programme that’s looking to encourage youths into considering science and engineering as a career. LBB’s Addison Capper chatted with JWT London creatives Will Brookwell, Will Helm, Morten Legarth, and campaign creative lead Jonathan Terry to find out more.

LBB> The project is a part of Shell’s #makethefuture campaign - what kind of brief did they initially approach you with and what were you thinking when you saw it?
JWT> The brief was to make science and energy relevant to millennials and inspire the next generation. We needed to do it in a way that was in tune with #makethefuture by highlighting innovative ways of generating energy.

LBB> And what kind of conversations and insights led to the player powered pitch?

JWT> In order to generate interest we knew we needed to tap into something that the target audience is extremely passionate about, and we had always wanted to power something with human energy. Sport is intrinsically linked to human energy, so a football pitch powered by players’ footsteps seemed like a great idea. In Brazil football is a way of life, but in the Favelas access to the grid can be problematic, so creating the pitch there and allowing kids to play into the night was the perfect fit.

LBB> You teamed up with Pavegen on the project - at which stage did they get involved? How did the relationship come about?

JWT> Shell had an existing relationship with Pavegen as a previous winner of the Shell LiveWIRE awards program for young entrepreneurs. So we knew about them already and consulted them on the feasibility of the idea from the off.

LBB> How long did the campaign take from development to launch?

JWT> From idea to launch, the project took us about 18 months.

LBB> It’s a pretty massive and ambitious idea - were you ever worried about its feasibility?

JWT> Yes, the whole time. The nature of the project, the location and scale were always things we had to work hard on to overcome, but we got there in the end.

LBB> At the project’s heart are some fairly emotive topics - gifting to those less fortunate and inspiring youths to be passionate about innovation and the future of the world we live in. With that in mind, how has working on the project affected you personally?

JWT> Overall it's been eye opening, and it's left us feeling pretty optimistic about the way things are heading. Everyone had some emotional involvement with the project as we started to realise the potential that these kids have and what they are going to be doing in ten or twenty years time - as cheesy as it sounds, they are the future after all. So getting them interested in science through sport was really satisfying.

Also football is a huge part of our lives, so giving these kids something they can enjoy everyday is something we won't forget. We just hope the next Neymar rises from Morro da Mineira. That would be awesome.

LBB> Pelé unveiled the pitch in Rio - why do you think he was so keen and willing to get involved?

JWT> Pelé is a huge supporter of Brazilian communities and works hard as an ambassador for youth education, so he was the perfect man for the job. In fact he was named after Thomas Edison (Pelé's real name being Edson) so the inspirational use of energy was something very close to his heart - so much so the opening reduced him to tears.

JWT> The initial complications came from finding the right pitch in the right location. After going through around 30 possibilities, we struck gold with Morro da Mineira. Importing the tiles into Brazil was also tricky, as they had never used this technology before. Lastly, the infrastructure shortages in Brazil during the timing of the project were very challenging as the World Cup had a huge impact, but our client Malena Cutuli showed great desire and support to push it through.

LBB> What are the long term plans for the pitch? Do you think it could be rolled out in other areas?

JWT> Our clients have made a five-year commitment to the maintenance of the pitch. And yes, we can't say too much about that right now, but we will be using the technology again soon. Watch this space.

LBB> And the #makethefuture initiative - do you know of any upcoming plans for that?

JWT> We have a music project coming up next. Again we can't say too much, but we are aiming to collaborate with a world famous music producer on that.

Will Brookwell & Will Helm (JWT London)

video
Your Shot: How Player Power Is Lighting Up Football in This Rio Favela
view more - Behind the Work