Your Shot: How Mother London & UNIT9 Had Commuters Soaring Over Wimbledon Like Rufus The Hawk

Imagine if you could fly to work; that’s what happened 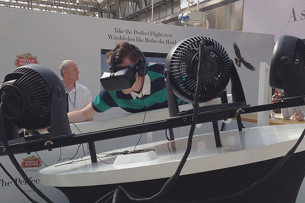 Last year Mother London launched a film for Stella Artois’ sponsorship of Wimbledon that documented Rufus, the tennis club’s resident hawk. And it was an absolute stunner. This year, fans could even closer to Rufus thanks to a bedazzling virtual reality experience from the Mother London team and UNIT9. A motion simulator rig was set up in London’s Waterloo train station that users laid on, wearing an Oculus Rift headset that gave them the experience of actually being Rufus, swooping up above and around Wimbledon. LBB’s Addison Capper was lucky enough to have a go (he's the top model in the main image) and came away all dreamy, forgetting that he was in fact in the middle of one of London’s busiest transport hubs at rush hour. He needed to know more, so he caught up with Mother London ECDs Ana Balarin and Hermeti Balarin, digital producer Olivier Guitton, and UNIT9 directing collective Horton de Rakoff and Producer Martin Jowers, to get the full story.

LBB> The Rufus film was very popular last year - and rightly so! How did it feel to bring him back and how was it getting properly inside his head?

Mother> Due to the popular success of last year’s film, bringing Rufus back was an obvious decision. The question was “how do you make it even more interesting than last year?”.

HdR> We (UNIT9] made the decision that the user of the experience should become Rufus’ eyes and ears. Rufus would do the flying, which allows us to enjoy the spectacle and not worry about crashing. Anyone who hass played a flight simulation computer game knows how difficult that is and how long it takes to master, even longer to fly gracefully.

LBB> Why did you decide to go down the VR route?

Mother> We wanted to connect with Stella Artois and Wimbledon enthusiasts in a deeper way than last year. A 360-degree experience gave us that added level of detail, letting the viewers appreciate Wimbledon the way Rufus does. Virtual reality, using both Oculus Rift and Google Cardboard, was the perfect way to bring this experience to life.

LBB> What kind of studies did you do into the movements and behaviours of Rufus?

Mother> The experience needed to feel as real as possible. We started by observing Rufus' natural movements over Wimbledon. We then placed a camera on his back and studied his flying patterns in more depth. Those were then mimicked in our film, shot using a custom-built 360-degree camera rig.

HdR> We were able to spend time with Rufus himself. The footage we shot of him for the intro and outro sections was invaluable in developing and working on his virtual wings and their animation.

LBB> How did you shoot the experience?

HdR> The footage was captured with a flying drone carrying an array of cameras. The pigeons and Rufus’ wings are real-time CGI elements which we added using game engine technology.

LBB> How did you ensure the camera movements mirrored those of Rufus?

HdR> We added Rufus’ various turns to the footage so that the direction of travel makes sense and feels natural. We then programmed/animated the motion control base to add the various banking and climbing/diving sensations you would experience as a hawk. This made it a bit like a flight simulation ride but with total freedom to look wherever you please.

LBB> Had you ever produced a VR project involving animal movements like this? What additional hurdles and issues does it bring up?

HdR> The test was always whether it had the grace and elegance of a bird.  We spent lots and lots of time smoothing out the mechanical elements that broke the immersion.

LBB> The experience was at Waterloo Station in London but I’m not sure if it’s going to be set up elsewhere. How many people are you hoping will try it out?

Mother> Over 720 people took part in the experience at Waterloo Station. Another 3,000 Google Cardboard glasses have been distributed. The 360-degree experience is also available through Stella Artois' The Perfect Flight app, available for iOS and Android.

LBB> It involved a huge rig which people laid on and that moves as Rufus flies through the air. What actually is it and how does it work? Logistically, how did you get into Waterloo station? What kind of tech does it involve?

MJ> We researched lots of options and ended up going for a motion rig that is traditionally used for simulators and in-film production. We custom-built a bed and frame around it to lie on, as well as programming and wiring fans with custom software and hardware to give a realistic feeling of wind. A lot of time was spent programming the movements of the base to feel smooth and realistic with the footage. Getting it into Waterloo involved a load-in time of midnight to be live for 7am on Monday morning! We had a great team and planned everything to the minute so there were no issues.

LBB> The whole experience really is beautiful - and peaceful! I think striking a balance between people enjoying a VR film and people being downright terrified must be quite tricky. Given that this involves people flying - something totally unnatural to humans! - how tricky was it to strike that balance?

Mother> We wanted the flight to feel thrilling but not to a point that it made viewers uncomfortable or scared, so we spent a long time developing and tweaking both the camera movements and the motion base behaviour. Crafting the sound mix to really immerse the viewer into the experience was also crucial. Needless to say it involved a lot of testing.

MJ> Again, we found that the key to the success of this project was in the smoothness of the movement. Motion sickness is an inherent issue with VR, especially when flying. We spent exhaustive days tweaking the movements to ensure that they felt natural and fitted perfectly with the footage, as any movement that doesn't match instantly brings on motion sickness in users.

LBB> I think this may be Mother’s first official VR project? How was it for you, as a creative, getting to grips with the medium? What did you learn? What additional issues and hurdles does it bring up?

Mother> Like with most technically challenging projects, this one was quite rewarding. We approached it like any other production, pursuing a clear creative vision and using the technologies’ possibilities and constraints to shape the execution as we went along.

Mother> Every new project comes with a learning curve. Bringing together the 360-degree film production, the motion-base experience and the Oculus Rift technology, whilst developing the Google Cardboard app and the micro-site in parallel was quite challenging. But a smooth communication channel between Mother and UNIT9 was key to keep the process lean and the creative idea intact.

HdR> The wings were tough to create in CGI, as they had to match the photographic background as seamlessly as possible whilst being so close to the camera. The solution to fade the bird out when you looked backwards came quite late in the process. This approach stopped you looking back into Rufus’ body, a most strange experience.

Animating and programming the motion control base took a lot of trial and error to balance the speed of movement with the grace and smoothness. We produced in excess of 50 takes to get our result!