Your Shot: How Lacoste and BETC Told an 80 Year Love Story Aboard a Train

Behind the Work 399 Add to collection 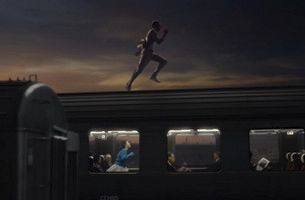 In 2014 Lacoste and its agency BETC Paris scored a winner with ‘The Big Leap’, a remarkable spot in which a man jumps from a building to signify the excitement of kissing his love. In its latest film, Lacoste is again playing with the realms of falling in love with a fantastical 90-second film, directed by Seb Edwards, set aboard a train that travels 80 years through time in a celebration of the polo shirt.

We chatted with BETC creatives Aurélie Scalabre and Olivier Aumard to find out more.

LBB> The Big Leap’ expands a single moment into a full ad. This new spot condenses 80+ years into a single film. Why does playing with time pair well with Lacoste?

Aurélie & Olivier> In sport or in life, timing is everything. In the blink of a second, your life can completely change. Sometimes, you have to make a decision that will alter the course of your life only based on your intuition.

All these feelings are expressed in our tagline ‘Life is a beautiful sport’.

Taking risks, trying things, are all part of the DNA of the brand and its founder, René Lacoste, the man who invented the polo shirt. Our hero in the film has very few seconds to act, just the way a player on a tennis court (be it René Lacoste or Novak Djokovic) has very short time to react and become a champion or not.

LBB> The product itself - clothing - is very practical, but this film continues the fantastical elements of the ‘The Big Leap’. What does that achieve?

Aurélie & Olivier> The Lacoste brand has been a part of the daily lives of many people for 80 years now. We wanted to show this fact in an emotional way.

Lacoste is a premium casual wear brand. Even though the product is practical and is always made to ensure movement, its territory is premium. With ‘The Big Leap’, we cast the first stone. It felt very natural to stay in the same tonality and to appear as a brand that brings you emotions, that makes you feel something, all while letting you penetrate its universe. We tried to achieve this balance through the attention brought to the design of the scenes of the film.

LBB> How did you select which time periods to include in the film?

Aurélie & Olivier> All the decades that the brand went through since its creation are represented in the film. And in each of these decades, we chose the most emblematic moment to illustrate.

Each decade gets represented by a powerful event, such as the nurses and the soldiers of the war, the dining car of the post-war period, the young people to symbolise the youth revolt of May ’68 in France…

But we also wanted to avoid making a historical film. ‘Timeless’ tells a love story between a man and a woman and that what was we wanted to highlight.

We wanted to show all that this couple went through over time with passion and intensity. All the different eras had to blend in seamlessly.

Aurélie & Olivier> Lacoste wanted to express the timeless elegance of its French polo and to keep building its premium and appealing image with a touch of Frenchness. The brief was very open regarding the creative direction. But of course, after ‘The Big Leap’ both Lacoste and BETC had high expectations to exceed the first success. It was a positive pressure to ensure a great film.

LBB> What were the biggest technical challenges of the shoot? How many of the effects are shot in camera and what is computer-generated?

Aurélie & Olivier> Being able to re-enact scenes from the right eras with the costumes and decors of each one of them was the main challenge. We tried to avoid being too much of a caricature or being too excessive. We had the chance to work with a costume designer who is used to working on historical period movie features. She worked closely with the director Seb Edwards to make sure that every single one of the costumes of a specific era brought credibility to the story without overshadowing the love story.

Most of the shoot took place in the Museum of the Train in Budapest, Hungary, so we had the chance to use genuine train equipment. Obviously, the scene where the man jumps on the roof of the train was shot in a studio.

We worked during the post production phase to make sure that viewers had the impression that the trains were going faster as the love story was progressing until the final outcome. it doesn’t show at all that the film was shot in a museum.