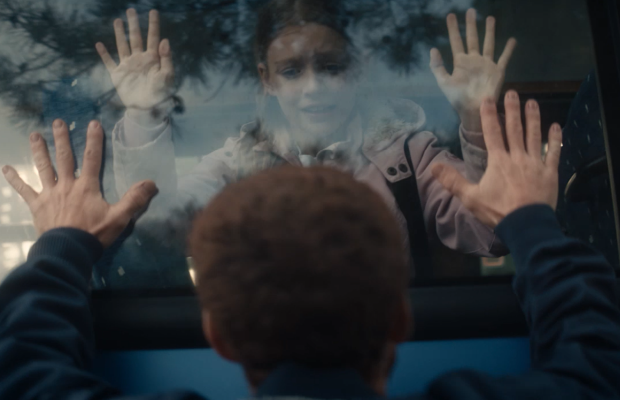 A lot of advertising aims to hit you in your gut. But in their powerful spot, the charity Usmev ako dar doesn’t so much pull at our heartstrings as rip them straight out.

The film sees parents enjoying time with their children, before they’re suddenly taken away with no explanation. A lost child is every parent’s worst nightmare, and the film expertly evokes that feeling using not much more than muted VFX and great acting.

To go behind the scenes of this hard-hitting film, LBB’s Adam Bennett spoke to director Juraj Janis, who is repped by Hitchhiker Films and John Spary Associates.

LBB> Congratulations on such a powerful film. How did you come to be involved with this campaign?

Juraj> Thank you. Peter Michalka, the creative director of the agency Respect APP approached me almost six months ago and asked me if I would be interested in doing this. At the time they only had the basic idea and they wanted to develop it further with a director already on board, searching for both the individual stories and a strategy how to weave them together to support their powerful message. I immediately said yes, of course. I loved the concept and I loved the idea of being a part of everything so early in the process.

LBB> And why was working with Usmev ako dar something you wanted to do?

Juraj> Apart from having a great concept and a prospect of a really exciting creative process, I was happy to say yes because I’ve known Usmev ako dar for almost a decade, since I shot my first film for them. They’re doing an incredible job helping people who really need it and I was glad I could be of some help.

LBB> What were your ambitions going into this project, and how do they compare to the finished film?

Juraj> I personally had many varying ambitions going into this, but the overarching one was to make the film as visceral as possible. I am a parent myself and I simply cannot imagine the horrors many families have to go through simply because they’ve run into financial trouble, often just temporarily. That’s why the last third of the film was originally supposed to look a little different and there should have been a couple of more scenes with the parents going through their individual torments, but we were hit by a series of unfortunate mishaps on the first day of shooting and we didn’t manage to shoot everything we planned to get. But maybe it was all for the better, because the film works very well as it is now.

LBB> How was the process for casting- did you encounter any challenges?

Juraj> I have to say I was very nervous at first, because I knew we had no budget for the talent and I wasn’t sure what kind of people we would be able to get, but in the end we were very lucky. The casting director at Hitchhiker Films did an absolutely fantastic job and she was able to get amazing professional actors for the adult roles (some of these people don’t even do commercials...) and also incredibly talented children. They all loved the idea and were willing to contribute to a good cause.

LBB> Where did you shoot, and why were those the right locations for telling this story?

Juraj> We shot in and around Bratislava, which is the main production hub in Slovakia. At the same time, we tried hard to make all the locations look like they could be anywhere in the country and that they would resemble places where underprivileged people live, go shopping or go to work every day.

LBB> How has the campaign been received? Is it along the lines of what you expected?

Juraj> I personally had a fantastic response from people whose opinion I value a lot, but probably the strongest one was from the mother of the little actress who ends up in the bus in one of the stories. She told me that they both cried when they saw the film and immediately went to donate money to Usmev ako dar. That was when I believed we must have done something right.

Juraj> The first scene we shot was the one in the forest. We struggled with changing light and we struggled with an ever-changing wind. As a result, the smoke from the smoke machine was constantly being blown in the opposite direction. We were losing precious time and we were sweating like pigs to get our shots done, when suddenly our first AD was stung by a wasp straight into his eye and had to be transported to a hospital immediately. I had a moment when I literally didn’t know what to do and I just wanted to go home. But then we regrouped and somehow managed to finish the day, although we had to lose some valuable scenes. But as I said before, maybe it was for the good in the end.

Juraj> I just have to take my hat off to Hitchhiker Films and to all other collaborators who went into this demanding project with me. More than anything else, this was a team effort and they all deserve a massive thank you. Without them the film would simply not exist.