Behind the Work 648 Add to collection 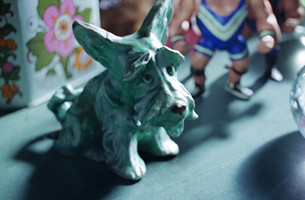 Even the most hard-nosed tough guy would struggle not to grin at this new film (which you should check out at the bottom of the page) by Leo Burnett London, Rogue Films director Sam Brown and Electric Theatre Collective (ETC). They’ve brought to life a motley crew of old toys, ornaments and stuffed animals that have been left behind from a jumble sale to the tune of Foreigner’s ‘80s classic ‘I Want To Know What Love Is’. LBB’s Addison Capper caught up with director Brown, ETC lead CG Rich Thomas, lead Flame Giles Cheetham and producer Serena Noorani to find out how they pulled it off.

LBB> Why did the brief from Leo Burnett stick out as something you wanted to get involved with?

SB> You're always looking out for a good story - it really is all that matters when you're choosing a job. I liked this one because it seemed like a small part of a much longer tale about these toys, where they came from and why they'd ended up here and what might happen to them next. I think that's when stories can really begin to connect with viewers, when they seem to have a life beyond the 60 seconds that you show them. I'm also used to fronting really big, sprawling shoots, so the idea of filming an entire ad on a single table top tickled me. A mini epic.

LBB> What techniques were involved in the shoot? Were the toys crafted in CG or are they models? Is it a mixture of the two? Which was which?

SB> We sourced real toys and objects and then, for the most part, 3D scanned them into digital form to animate. Some were complete CGI rebuilds, while others were puppeteered and had only mouths replaced. So the teddy bear was almost all real, whereas the marmot was entirely CG. To Electric Theatre Collective’s credit, it's pretty impossible to tell which is which.

ETC> All the toys were shot on location during the live action shoot. Our job was to then recreate and replace 95 per cent of them with CG doubles. Each object was scanned, remodelled, textured and then ‘rigged’ to create a fully animatable digital puppet. This puppet was brought to life by our animators and then we worked to perfectly match the lighting and environment of the original plate. Finally, in the composting process, we replaced the real shot objects with our all singing all dancing CG toys. The singing teddy that opens the commercial was puppeteered on set but required a CG head to enable him to sing. We took some time to research and develop him to make sure we could achieve the right balance of a natural but forlorn looking character.

LBB> Which toys proved trickiest to work with and why?

SB> The teddy bear was pretty tough because she's old enough to have seen two world wars and is quite frail. We had to do all sorts of internal things to her to enable us to puppeteer. She was also playing a male teddy in the film, which I think was psychologically challenging for her. The fuzzballs were all prima donnas and were aloof between set-ups and pretty much ignored my direction. Don't work with fuzzballs.

ETC> No one specific toy proved trickier than another. The sheer number of different toys provided the main challenge. For each one a separate solution had to be arrived at. Get it wrong and the object fails to live and descends into creepiness or becomes implausible. Should porcelain bend? How stiff should a stuffed marmot be? Never would I have thought I'd be asking myself that! Sometimes the answers came easily, others were tougher. But working closely with Sam, we believe we have found the right balance of reality and fantasy.

LBB> I love the little details in the toys’ movements, like the movements of the wrestler’s arms. What kind of research went into the toys you featured and how they interacted?

SB> We started with a kind of open casting for toys and objects and looked at hundreds upon hundreds of things before whittling it down to our final cast. We then spent ages talking about how far we could push the animation of each character, and which rules to break in terms of how they could move and how they couldn't. To make it convincing for the viewer you have to go deep into each character and figure out their attributes, personality and limitations. Ultimately we decided that we wanted to express the frustration of the characters with restricted movement; the feeling that they couldn't just walk off and save themselves. They're trapped in their immobile little bodies. They're at our mercy.

ETC> Our animators aimed to imbue each character with its own unique life whilst keeping true to the limitations of their real movement where possible. One of our favourite toys was the dancing cat who makes his brief cameo in the tracking mid shot on the left of screen. It feels very true to his real action. Hopefully everyone will pick out there own favourite little moment each time they watch it.

ETC> The development process was huge, we spent a long time figuring how each character should move. Each character was very specific, taking into account the material they were made from and how they were manufactured, such as any in-built articulation. But also the toys’ persona would come into play - are they tough guys or graceful performers?

LBB> How early on were you guys [ETC] involved in the production?

ETC> We were involved from an early stage of pre-prod with Sam in order to help ‘cast’ the right toys from a huge selection and find the hero characters that would deliver the emotion and expressions that were needed.

LBB> How tricky was it to inject that personal and almost human feeling to the toys? How did you pull it off?

SB> Creating an emotional connection with the viewer was the priority. So we broke the song down and then found the object whose personal story best captured the angst of a particular line. So for example, Rodin's 'Thinker' seemed like the best character to sing about 'heartbreak and pain' because he's famously so intense and brooding. When the wrestler insists that he 'can't take it again' you feel the suppressed rage of being battered and clattered in endless tabletop bouts. When Action Man turns to say 'I wanna feel...' he's expressing the pent-up sensitivity that his macho persona normally denies. So each line has its own backstory that hopefully makes it resonate.

LBB> How were ETC to work with?

SB> ETC did the post production and character design where required. They're a great outfit doing very focused, creative and ambitious work, and deserve all the accolades that are levelled at them.

LBB> How much involvement did Sam and Leo Burnett have in the VFX process?

ETC> Sam and the creatives were very much involved, particularly in helping us understand how the characters would need to express themselves. We talked at length about each hero toy and what its story was, and Sam gave us references that helped our animators achieve the right emotions. We were tweaking the animation until the very last day, finessing details such as how long the Scottie dog would look to camera before he looked away or adding pen marks to the wrestlers and price tags to the marmot. Overall it was a hugely collaborative process - not only within ETC’s various departments of production, grade [Electric Colour], 3D and 2D, but also with the agency, director and client.

LBB> How was the shoot and how long was the project from start to finish?

SB> We shot over two days with a couple of months of pre and postproduction. It sounds obvious to say it, but it's amazing how much the quality of something can rocket if you are given a proper amount of time to work on it. I'm constantly astonished at how little time is left on a project when it finally arrives with production because with every day we're given to work on something we can make it better and better and better.

SB> It's surprisingly tricky working at a macro level. Everything seems to take ten times longer.

ETC> The hardest decision we had to make was which of the table football players we had to decapitate.