Behind the Work 952 Add to collection 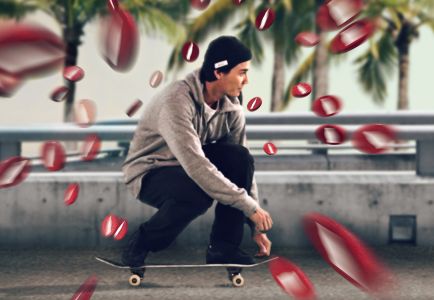 Snapchat is arguably the most exciting platform for advertisers right now – but due to the constraints of its format and the widely young demographic of its users, many brands are still struggling to get to grips with how to make the most of it. But Coca-Cola Germany and its agency Ogilvy Berlin gave it a good shot this past weekend with a nifty skateboard game that utilised the ‘Story’ function of the app. ‘SnapSkate’ is a classic jump ’n’ run game that consists of several dozen Snaps, with the player having to tap on the screen and skip to the next Snap at the right moment. It relies solely on the original navigation controls of Snapchat - no coding and, thanks to a collaboration with popular German YouTuber Izzi, no paid media either.

LBB> What was the initial brief like from Coca-Cola and how did you end up at the idea of a Snapchat game?

TS> As we are taking care of Coca-Cola's social media streams in 14 markets of Western Europe our brief is to create spectacular, engaging content and create epic moments for our young target audience. Primarily we are focusing on Facebook and Instagram but with a dramatically increasing relevance of Snapchat we are extending our playground. Engaging with teens on Snapchat is quite a task for brands. The standard media options are quite limited and expensive at the same time. That was a special challenge for Coca-Cola and us that we wanted to crack together. Coming up with a native innovative game seemed to be the perfect solution: being highly engaging for no media budget.

LBB> Nothing like this has ever really been launched on Snapchat - so what initially inspired the idea?

TS> Everyone is talking about Stories on Snapchat and Instagram. But it seemed that no one had thought about the story idea properly yet. Why not have a continuing story within the Snapchat Stories? Why not make use of the point of time, when people tap to jump to the next video clip? These questions triggered our motivation to develop a game on Snapchat, which explores the story idea a bit more and makes use of the existing functions of the app.

LBB> Why Snapchat? Why was this the perfect platform to reach your consumers?

TS> We see that teenagers are quite passively consuming on Facebook. On Snapchat they have a totally different user behaviour: here our young target group is strongly engaging with content. But usually it's user generated content. To tap into that interesting occasion was of high interest for Coca-Cola and as a brand quite a challenge.

LBB> Snapchat is arguably the most exciting platform for advertisers at the moment, due to the demographic of people that make up much of its user-base. But I think it’s also fair to say that many advertisers are still struggling to get to grips with it. Why do you think that is?

TS> Snapchat is in many ways so different to our ‘adult’ platform Facebook which most people in advertising are using: the inconsistent navigation in the app, the ephemerality of the content, the limitations for a brand to bring in controlled and approved content. All these topics are barriers for most advertisers to tap into this playground of teens with its own rules. And, to be honest, we had to find workarounds for these barriers to launch Snapskate.

LBB> When it came to developing the game, obviously you were tied to the constraints of Snapchat - how many different iterations did it go through before you ended up with this skate game?

TS> Fortunately we had an extremely energetic process while developing the game. The idea of meaningful connections of several Snaps leading to an interactive game was born and embraced by everyone quite early in the process. Then we were discussing other topics back and forth like: Do we launch three different games? Do we launch everything on one day or one level per day? And so on.

LBB> How does it work exactly?

TS> Snapchat Stories consist of photos and/or videos put after each other, like a playlist. These Stories are kind of shared amongst friends. If you want to jump to the next photo or video in the list, you have to tap on the mobile screen. For Snapskate we put video clips together of a guy skating through an urban scenery with obstacles in his way. If you don't tap or tap too late the skater fails. But if tapped in the right moment, you jump to the next video, in which the skater jumps over an obstacle. And so on. We call it the double-jump-principle (not!).

LBB> Tell us a bit about the influencer you worked with and why.

TS> Izzi is a famous YouTube star in Germany. He's also one of our hosts for CokeTV, Germany's most successful branded entertainment channel on YouTube for teenagers (which, by the way, is also co-developed by Ogilvy Berlin). But Izzi also has quite a big following on Snapchat, so it was quite obvious for us to work with him. For authenticity reasons we launched the game first on his channel and later on Coca-Cola's Snapchat channel. Of course he also made a shoutout on his YouTube channel for the game.

TS> The most incredible thing was to get the pre-produced content into Snapchat. We had to film each of the 38 snaps with the Snapchat app on a mobile phone from a big retina display. And we had to do it again and again every 24 hours. That reminded me of my childhood when I sat with a microphone in front of a radio recording my favourite songs. In a couple of months maybe we will laugh about it...

TS> Many thanks to everyone involved in this innovative project and the excellent teamwork: Coca-Cola (of course), MovieBrats Studios, Stink Berlin and Studio Funk Berlin.