Your Shot: How BETC and Cillit Bang Cleaned Out the Stereotypes with Flashdance-Inspired Spot

Behind the filth, sweat and dancing of a campaign that smashes sexist marketing assumptions 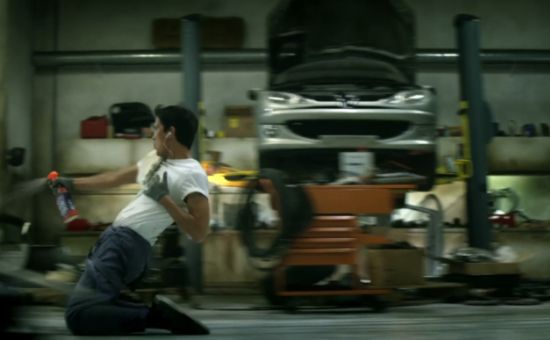 Cillit Bang is the cleaning brand indelibly associated with Barry Scott, an affable cleaning enthusiast that starred in a series of ads that were so naff they were brilliant. This week the brand took a somewhat different approach when it launched its first ever global campaign, created by BETC Paris, with a burst of brilliant silliness that you’ll want to keep watching again and again. BETC enlisted Partizan director Michael Gracey, who is famous for choreography feats such as T-Mobile’s flashmob dance and the more recent Human Kaleidoscope for Samsung, to produce ‘The Mechanic’. It’s outrageously fun, featuring said mechanic getting to grips with a particularly dirty car garage. LBB’s Addison Capper spoke with BETC creatives Guillaume Rebbot, Alexandre Saad and Marie Baillot to find out how they pulled it off.

LBB> In the UK, Cillit Bang is synonymous with the character Barry Scott. How much of this heritage did you look into when developing the idea? Did it inform the tongue-in-cheek approach of ‘The Mechanic’?

BETC> We have created a new worldwide brand platform, from scratch. The campaign will gradually come out in different countries and to the joy of his fans, Barry Scott may not be gone forever. The reason we chose to set the story in a garage was simply because that was one of the dirtiest places we could think of – perfect for a torture test!

LBB> It seems that Cillit Bang is a very male friendly brand - do you believe that’s the case? Why?

BETC> We just find traditional cleaning product ads that exclusively feature housewives extremely tedious. It’s 2016 and men participate as much as women in the household chores. We just thought it made sense to have a male hero.

LBB> The whole brand seems far less gender specific and patronising than other more stereotypical cleaning brands. How refreshing was it for you to work on a brand like that?

BETC> All ads for cleaning products are built on the same model. Cleaning is always presented as a chore (to be done by a woman). It was time to break the codes and show that with efficient products cleaning can be a cakewalk.

LBB> Michael Gracey has somewhat of a history of super fun, choreographed ads - what did he bring to the final production that others couldn’t?

BETC> Michael Gracey was the perfect director for the concept. With the dancer, he transformed the idea into an incredible show. Michael turned an ad for cleaning products into a music video that you want to watch over and over.

LBB> Is the filth and dirt real or CG?

BETC> All the filth and dirt are real. We first built the garage inside a bigger garage, and then paid five guys to put filth everywhere to make it look like the place hadn’t been cleaned for years. Mucky business, but it was impressive to watch them, they were such dirt pros!

LBB> Who is the dancer and how did he react to being in such a brilliantly silly ad?

BETC> The dancer and co-choreographer is Daniel Cloud Campos. He is so brilliant! He used to be the lead dancer for Madonna. He did all the tricks you see in the film live. The only CG work was a cable and turning a pilates ball into wheels. To see him on the shoot was mind blowing.

LBB> Tell us about the development of the tagline… it is really funny. How long did it take you to come up with it? Did it go through many iterations before nailed it?

BETC> It took hours of work and long meetings to come up with it but the moment we found it there was no doubt – it was obviously the one!

BETC> The trickiest component in the creative process was that the result had to include a product test - it was a challenge to make that look fun..

A big breakthrough was when we found the insight that the ad is based on: you can have fun with music while cleaning!