Your Shot: How Akestam Holst Turned 15 Toddlers into an Orchestra in 5 Weeks 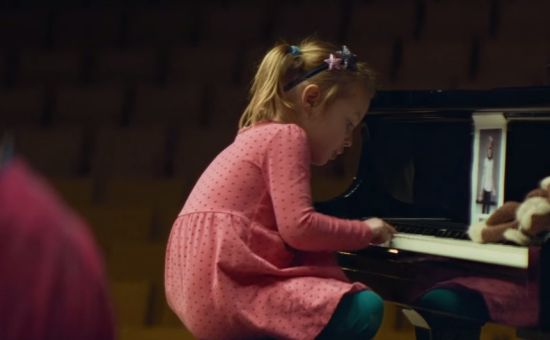 Teaching 15 musically untrained toddlers one of the world’s most famous classical pieces of music in five weeks? The clanging of pots and pans is already hurting our ears. But one shouldn’t presume because that’s exactly what Swedish agency Åkestam Holst has done in this new campaign for insurance brand Folksam - and there’s not one horribly smashed, homemade instrument to be heard any wear. In fact, the final film is quite the opposite. It’s a two-and-a-half-minute documentary style short that follows the kids’ journey to musical brilliance. With the help of famed Swedish conductor Jan Risberg, Åkestam Holst taught the children to play Erik Satie’s Gymnopédie no. 1 in harmony. It won’t fail to make you smile. LBB’s Addison Capper caught up with the Åkestam Holst creative team to find out more.

LBB> What was the initial brief like from Folksam? What were you thinking when you saw it?

AH> Folksam is an insurance company with lots of engagements in children´s comfort and development. For 2015 the task was to put focus on the children. We also knew that Folksam was going to launch a new and improved child insurance during the year. So we decided to pay tribute to children and be inspired by their great potential.

We had done commercials with parachuting cats and diving dogs within the concept ‘For everything you care about’, but with children we felt that we wanted to do something beyond an advertising campaign, something more like a real life project.

LBB> Where did this idea of getting kids to learn classical music come from?

AH> We wanted to come up with something that would really touch people. Combining toddlers and beautiful classical music was a good start for that. But in order to make it more than just cute we thought it would be interesting to add a challenge and the pedagogic view to it all. There is so many interesting things to find out about the way music affects children and their capacity. Not just in music but in creativity and learning in general.

LBB> Did you ever worry about its feasibility?

AH> Yes, every day, every minute of the project. Working with small children is very unpredictable. So many things in this project could have gone wrong. But what we knew all the time (once the children and the team around them was set) was that the process in itself would be interesting to follow and to document. We never aimed for a perfect result, but for a rewarding experience for the children and to be able to follow them through that journey.

LBB> What was Folksam’s reaction when you pitched the idea to them?

AH> They loved it!

LBB> You only had five weeks to train the 15 toddlers - what were the first steps in transforming them into the orchestra?

AH> The first step was to make the children comfortable with the conductor and really get to know him. Then it was necessary for them to get acquainted with the concept of beats and tempo so the first few days were then spent sitting on the floor clapping hands and using words like ‘pan-cake’ and ‘building-block’ to make them feel the beat. Listening and getting the feel for the classical piece of Eric Satie was also an important part of the opening days. Then moving on to trying to play the melody on children’s xylophones, using the colours for each tone. Next step was moving up to the pianos. We placed a few pianos and keyboards inside the preschool for the children to play around with.

LBB> Why were those 15 toddlers chosen? Did any of them have musical experience?

AH> It was of great importance to us not to make a selection of children with certain skills or talents. Therefore we chose to work with a regular group of children at a regular preschool. To make this project work it was crucial that they knew each other well and felt comfortable with each other. No one had any musical experience, except for some singing sessions at morning gatherings.

LBB> Were there any parts that really surprised you?

AH> There were many happy surprises along the way. For example how well the children interacted with the conductor, the happiness and joy they expressed throughout the journey, their fast progress. But most of all, the genuine interest they found in playing music, even after this project was over. Some of the parents have on their children´s requests now purchased pianos.

LBB> Who did you enlist to help teach the kids to play the music?

AH> We enlisted the famous Swedish conductor and also teacher at the Royal Music School in Stockholm, Jan Risberg. He led the teaching with help from a music teacher and the ordinary preschool teachers. They soon too became very good at teaching the children and helping out with smart ideas on how to communicate music to the children.

LBB> How was it for you working with so many kids like that?

LBB> How many takes did you capture of the final performance?

AH> By the time we were in the concert hall the children where so used to the cameramen being around that to them it was not a big change. We simply said that they were going to rehearse in another place with Jan. (We had already got them acquainted with the hall on an earlier visit, listening to live music.) So we filmed the whole time, as we had done during the five weeks. The rehearsals, the breaks, playing around for a while on the stage, then back to playing the classical piece. Only this time we used more advanced cameras and more cameramen. To the children this was just another day with their teachers and the conductor. That’s also why we didn’t want any audience or parents around. That would have made a whole different experience for the children and they might have lost their focus.

AH> Working with children at this very young age, three-four years old, demands a lot of patience. Their ability to concentrate is not the best and they can focus at most 10-15 minutes at a time. So we had to ‘catch the moments’ and a 100 per cent adapt to their needs. We also had to find creative ways to keep the flame burning all the way to the end and the teachers were fantastic with the way they helped us out here. Also we tried to make the project as fun and varied as possible with different excursions. For example to the Royal Opera House, singing and playing together with musicians from the Swedish children’s music scene, singing together with a professional choir and meeting with a real symphony orchestra.