Behind the Work 769 Add to collection 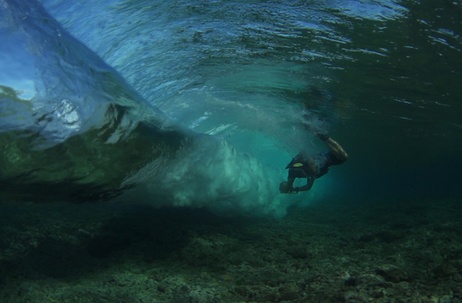 When AMV BBDO copywriter Nicholas Hulley and art director Nadja Lossgott were presented the outdoor brief to portray the beauty of a pint of Guinness, they were in for a bit of challenge. As one of the biggest brands on the planet with a proud advertising heritage, the pair was keen to make sure that they were bringing something new to the malty mixture. The result is this beautiful film and set of prints that were actually shot beneath the Tahitian waves by legendary surf photographer Brian Bielmann. There’s no CGI or VFX – Bielmann spent days wedged between the razor sharp nooks and crannies of the reef below him and the several tonnes of waterpower above. And all of that while keeping the composure to produce the shots you see below. Addison Capper spoke to creatives Hulley and Lossgott and photographer Bielmann about this epic project.

LBB> What kind of brief did Guinness present you with and how did it end up with the idea to shoot the 'surge' within ocean waves?

NH&NL> It was really an outdoor brief to show how mouth-watering a pint of Guinness is. This has been done in hundreds of different ways, so we were looking for a fresh approach. The idea came when we tried to imagine what it would look like if you could get inside the 'surge'. It initially made us think of being under a giant waterfall. The point of impact would mimic what happens when a pint of Guinness is being poured, but on an epic scale.

LBB> How long was the pre-production and planning process and what did it involve?

NH&NL> It took about three months. The planning really was all about finding the right photographer. Someone with the eye, but just as importantly, someone who could still do the job while being thrown around by huge waves. We looked at a lot of photographers. And then we discovered Brian, a non-commercial photographer who has spent 30 years in the sea shooting the best surfers in the world but who also has an incredible eye for underwater shots.

It was Brian who led us to Tahiti because Teahupo’o [a village on the island] has crystal clear water that you can stay in long enough to get your shots.


LBB> It's a pretty huge and ballsy project - as a creative, did you have any concerns about feasibility?

NH&NL> Of course we did. When we decided to go beneath the waves we realized that everything was dependent on the photographer. When we found Brian we knew we were going to be okay. He's like a war photographer – when everyone else would duck for cover he just keeps snapping.

LBB> How much of the final film was captured in camera and how much in post?

NH&NL> Everything you see was captured in camera. There was no post, only cropping and grading.

LBB> What was it like working with Brian Bielmann and what did he bring to the final production?

NH&NL> Brian is a true artist and great guy. Everyday he would put himself into extreme conditions – the reef just below him and pounding waves just above – and every time he would return to the surface with stunningly beautiful photos. But, over and above his amazing eye for photography, he is one of the world's good guys and it was a pleasure working with him.

LBB> Strategically, what do you feel a campaign of this power will achieve for Guinness as a brand?

NH&NL> The surge is such an iconic part of what people love about Guinness. Hopefully our epic recreation of it in poster and outdoor will remind people of what an extraordinary beer it really is.

LBB> I imagine the project threw up a few complications, but what were the stand out challenges during conception and how did you overcome them?

NH&NL> The biggest challenge was nature. You are at her mercy.  Brian had to wedge himself between a ton of water and vicious reef, with only a few metres of space between the two. Then he had to keep his composure and frame perfect shots.  Because of Brian's skill and Tahiti delivering ideal conditions we were able to pull it off.

LBB> What kind of brief did AMV BBDO present you with? Did you have any hesitations before accepting the job?

BB> When AMV first contacted me I was really busy and didn't take them too seriously – I remember telling them I don't shoot in cold water. Looking back I can't believe I didn't realise what a big deal this campaign would turn out to be.

LBB> How did capturing the 'personality' of the sea differ from your usual outpost of shooting surfers?

BB> When I’m shooting surfers it’s all about action and, of course, you’re hoping to add a little bit of your own creativity to the shots. The Guinness campaign, in contrast, was truly a labour of love. I got to shoot it for a week straight and cover lots of different angles and lighting situations.

LBB> Although your main output is shooting surfers, your biggest passion is underwater photography. How long have you been doing it and what was it that drew you to the activity?

BB> I’ve been shooting underwater for years – not for the money but because it’s something I really love. There are currently a lot of people shooting underwater, so I’m thankful that the art buyer Kirstie Johnstone and all of the others at AMV took the time to search and ask around the surf industry and find me.  This is the first time I’d ever said to a potential client that I was the best person for this job. I probably sounded pretty full of myself but I truly believed it. I’m sure there are photographers who say that every time they go for any job, but I wouldn't want it unless it’s something I do well.

I first started shooting underwater about 17 years ago with a beautiful girl I’d met and taken to Tahiti with me. She worked at a swimsuit shop and had designed this long white dress – we took photos of her swimming underwater and, even to this day, they’re my favourite photos I’ve ever taken. After that I was hooked.

By the way, we have been married now for 13 years and together for about 17.

LBB> You say that you've suffered a number of 'Tahitian tattoos' during your career - were any inflicted shooting this? Was it any more dangerous than a normal shoot of yours?

BB> Oh gosh I’ve been beaten up so many times – whether it’s by the reef, surfboards, jet skis, boats, anything. On this trip I got cuts from the reef on my arm that took a long time to go away. My fins also rubbed the skin right off the top of both of my feet.

I had to keep shooting so the cuts turned into craters – scary stuff when you’re somewhere like Tahiti and you worry of them getting infected. I used natural healing oils by dōTERRA which healed the wounds pretty quickly and protected me from infection for the rest of the shoot.

When you’re shooting underwater you have to deal with getting slammed if the waves are big. If they’re smaller it’s about getting between the waves and the reef. I had to deal with both of these issues on this job.

LBB> How long were you shooting before you got the results you were happy with?

BB> I think we got some good shots right away but it was having the whole production team there that got the job done. They kept fine-tuning what we would get each day. We shot everyday and the conditions were perfect, which was good because the team had put their faith in me when I’d suggested should shooting in Tahiti and Hawaii.

LBB> What were the biggest challenges you faced capturing the shots? How did you manage to overcome them?

BB> The biggest challenges were to get the photos to fit the format. We got all kinds of crazy shots but the idea was based around what it would look like if you were to shrink a photographer and place him in a glass of Guinness as it’s being poured. I think we got what we wanted. I would love to do a show with all the outtakes, as these are some of the best images I’ve ever taken of underwater waves.

Check out the making of film below.