Behind the Work 522 Add to collection

The Gainomax monkeys have evolved into incompetent sports stars 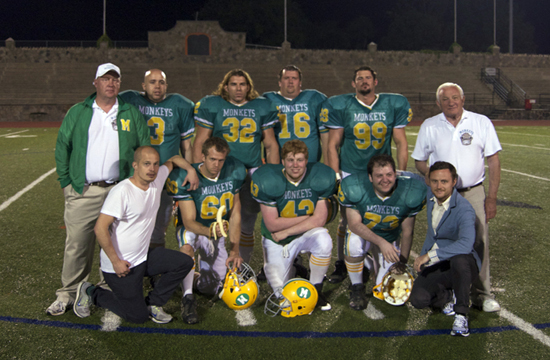 The guys and gals at Saatchi & Saatchi Stockholm must have been swotting up on Darwin because the stars of their latest ‘Bananas Are for Monkeys’ campaign  are looking distinctly human. Building on the original idea which was conceived in 2006, the monkeys have evolved, though the journey from primate to person has not been too kind to this set of hapless American football players. LBB chats to Saatchi & Saatchi Stockholm’s ECD, Gustav Egerstedt to get the lowdown on the way of the monkey.
LBB> What was the brief from the client and what were your immediate thoughts when you saw it?
GE> The brief was to create a new Gainomax campaign based on the ‘Bananas are for Monkeys’ concept, but to reach for a wider target group than before. Immediately we thought that we’d have to evolve and revitalise the monkey. It was time for something new to happen with Gainomax.
LBB> The 'Bananas Are For Monkeys' line has been around for a few years – how did you go about finding a new angle? How did the American Football approach come up?
GE> We spent a lot of time trying to find the right angle with the monkeys. Monkeys doing this and monkeys doing that… but one day, we finally outsmarted the monkeys that we created.
We just went with nature; monkey eventually becomes man. That was a huge breakthrough for us because it was actually a quite short path to the end result of American football.
LBB> How does this campaign move the Gainomax brand forward?
GE> I think we will reach a broader audience because of the connection with team sports, rather than the previous focus on working out alone in a gym. The fact that this time we changed the characters from real monkeys to human monkeys has opened up a whole new world, creatively.
LBB> As Saatchi & Saatchi Sweden has been working for quite a few years with Gainomax, there has been time for the relationship to develop and mature. What sort of relationship do you guys have and how does this influence the creative?
GE> We both have the same view on good communication and a similar sense of humour. We also both know when the tone is just right for Gainomax. All these things make the brand easy and fun to work with. The team has travelled a long way together - the same set of creatives that worked on Gainomax six years ago still works with the client today.
LBB> Even though the Monkeys are kind of incompetent, they're still quite a loveable bunch. Why was it important to ensure that they were likeable characters even though they are not really 'heroes'?
GE> When we started the concept six years ago, we realised that everybody loves monkeys, but no one wants to be one. I think that is still true. Consequently, we wanted people to love the football team, but not want to be in it. We aimed for people to feel a bit stupid for eating a banana after working out, without the feeling that a bully is telling you what to do.
LBB> Why did you opt for American football as a sport? It's not a sport that is particularly associated with Sweden. Is it a sport with a big following in Sweden or was the unusualness or American vibe important?
GE> American football is not a big sport in Sweden. We wanted to keep a distance between the audience and the people eating the bananas. We have gone from real monkeys to american football monkeys and are preserving the surreal feeling by keeping a distance. It could have been another sport in a different country, so it was more the unusualness than the American vibe that was important.
LBB> In terms of art direction, what were you trying to achieve with the bright, crisp colour palette?
GE> I wanted it to have a clear identity and a timeless look. I think this look is retro, modern and future, all at the same time. It will appeal to everybody!
LBB> Why was director Oskar Bård the right man for the job, and what did he bring to the script?
GE> Oskar does exactly what we tell him to do - he is a monkey with a camera. He has directed many of the previous Gainomax films, so he knows the soul of the brand. We also did a project last year in which we used the same kind of storytelling and production technique. We loved working like that and wanted to try that again. He's clearly one of the best.
LBB> Strategically, why do you think this comedy approach appeals to the target demographic? Why is this approach more appropriate than, say, a super macho, sweat-and-muscles spot?
GE> If we had gone towards the sweaty muscles approach, there would have been a big risk of getting mixed up with other sports advertising, such as Nike, Adidas and Gatorade. We had to go the unpretentious way. The funny way. The way of the monkey.