Your Shot: Fuck The Poor

Behind the Work 765 Add to collection 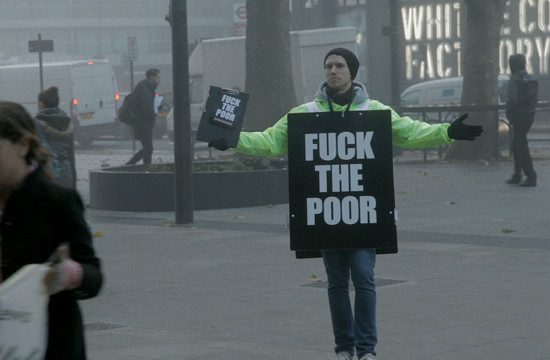 'Fuck The Poor' isn't just shocking for its use of expletives and out there idea for zero media spend. The campaign for London charity The Pillon Trust really smacks you in the face and puts into perspective how little attention we give to charity workers on the streets. It's not all doom and gloom, though. The Publicis London-created work cleverly makes the viewer feel at one with those making a stand against Mr 'Fuck The Poor', aka actor Dan Atwell. Publicis London ECD Andy Bird told LBB's Addison Capper how one man took his argument against the sign a little too far and why shooting was put on hold for six hours.

Check out the campaign video at the bottom of the page.

LBB> What was the initial brief like from the client and what were your thoughts when you saw it?

AB> Government cutbacks have seen funding to The Pilion Trust down by 60 per cent and donations from the public down 20 per cent. The Trust needed a way of asking for money – without having any money for bought media.

The idea was based on an observation. We noticed that despite feeling for the homeless we only occasionally stopped to give money. That awful feeling after you’ve walked past either someone collecting for charity or a homeless person – it felt like something we could work. We all know what the right thing to do is – but how often do we actually do it?

LBB> How did most people react to the sign? And how did they react when they realised it was a stunt?

AB> It really demonstrated that London is filled with have-a-go heroes. Lots of people took Dan Atwell, our actor, to task. He was threatened with a knife in Stratford, which was about the most extreme reaction. And the police stopped us three times. Two out of the three were sympathetic to our cause. Unfortunately the third obviously got out of bed on the wrong side and shut us down after six hours.

LBB> Were you surprised by the reaction of anyone?

AB> Just the guy who threatened to stab Dan. And the grumpy copper really.

LBB> Where did it take place and where did you find Dan Atwell? He's pretty brave…

AB> Filming took place in Angel, Stratford, Oxford St and Old St. Dan is a friend of the director Jonathan Pearson. There weren’t many other people brave enough to do it!

LBB> Did anyone react especially bad to the 'Fuck The Poor' message?

AB> Other than the knifeman and the grumpy copper, it was the producer when we first pitched the idea. He was a bit worried about the insurance!