Your Shot: FSM’s ‘Glow Girl’ Invites You To Catch Her If You Can 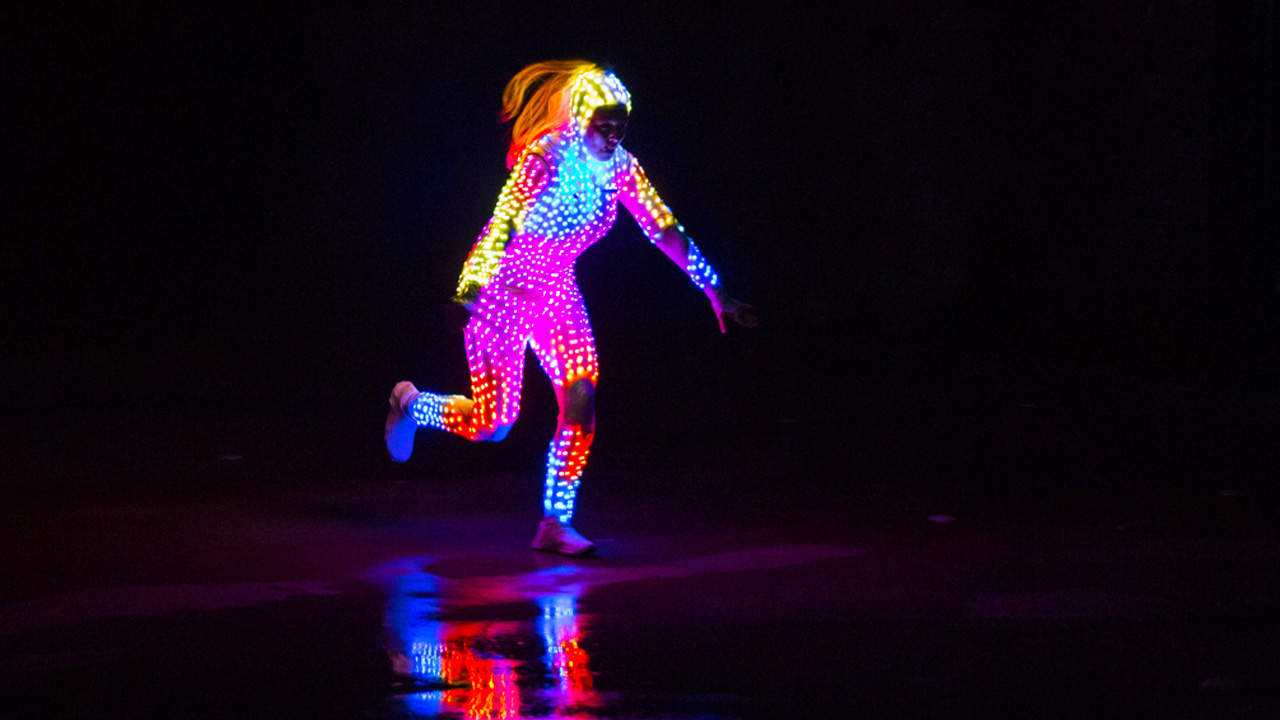 Well, not entirely, but he did bring to life U by Kotex’s logo in a rather unconventional way.

Approached by the agency to recreate the brand’s coloured silhouette brandmark, FSM’s treatment entailed conceptualising and developing a catsuit worn by a female talent who would resemble the brandmark by literally making it up from thousands of programmable, lit up LED lights.

The team commenced development at FSM, designing the two LED light suits that each contained 2,500 individually programmable LED lights. This meant the light suit could be programmed and, like a TV screen, could display any and every colour of the rainbow, and even an image.

The LED light suit is designed to be worn by a parkour freestyle running athlete. As she runs through a dark urban city environment, she literally “lights up” the environment as she goes through her paces, performing tricks around urban structures. 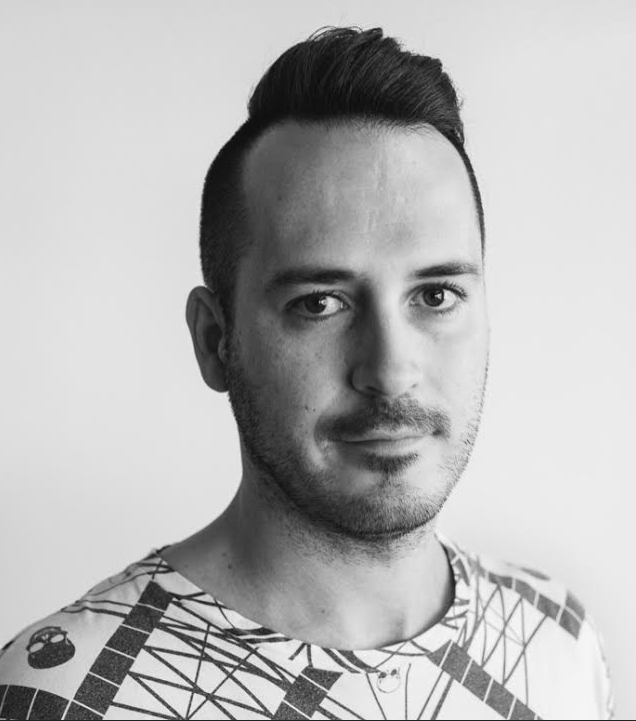 LBB> What was your creative inspiration behind the LED light catsuit concept?

Emile Rademeyer> We were approached by Ogilvy Sydney to bring to life the coloured silhouette brandmark found on the U by Kotex Ultrathins product for a dynamic 30 second film. This was to be done in the style of a freestyle running parkour athlete.

Our treatment to the agency was to create an electronic light suit made up of thousands of programmable LEDs. We’ve seen suits with LED lights before, but never a fully programmable suit literally covered in thousands upon thousands of them. What we wanted to create was a one-of-a-kind, high-tech, wearable TV screen. Our creative inspiration was to push the boundaries, and our research both locally and internationally showed that what we were trying to achieve had technically never been done before. Without any off-the-shelf solutions available, this one-of-a-kind LED suit and proprietary software was designed and built entirely in-house at FSM. 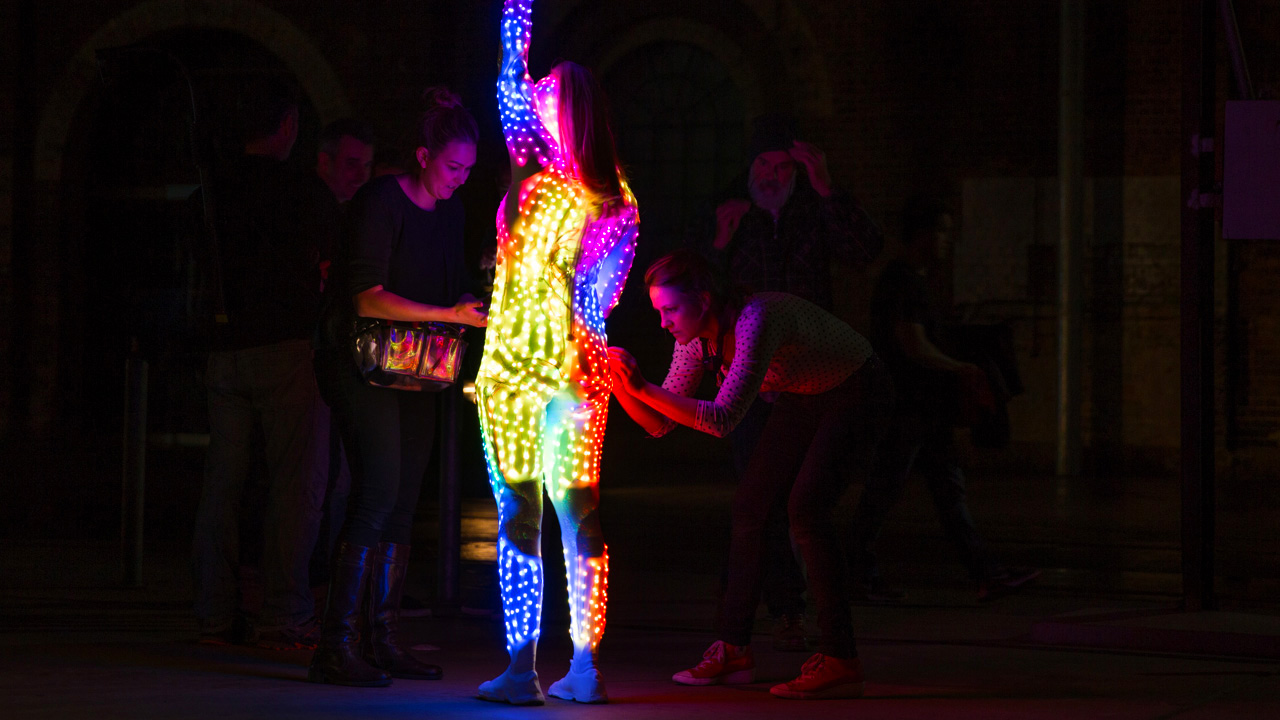 LBB> How easy was it to find and cast an actual parkour lead talent?

ER> We were impressed by the amount of talented female athletes in Sydney. Our initial port of call was a casting agent to help source female freestyle running parkour athletes, preferably with stunt experience. A number of talented athletes fit the brief.  Apart from being able to physically perform the necessary stunts, the parkour athletes had to resemble the silhouette shape on the pack as close as possible. Length of hair and body shape came into play here. Two athletes were chosen with Marlee Barber and Monique McDonald fitting the brief. These girls were amazing. Professionally trained with stunt accreditation, barely anything was off limits for them. 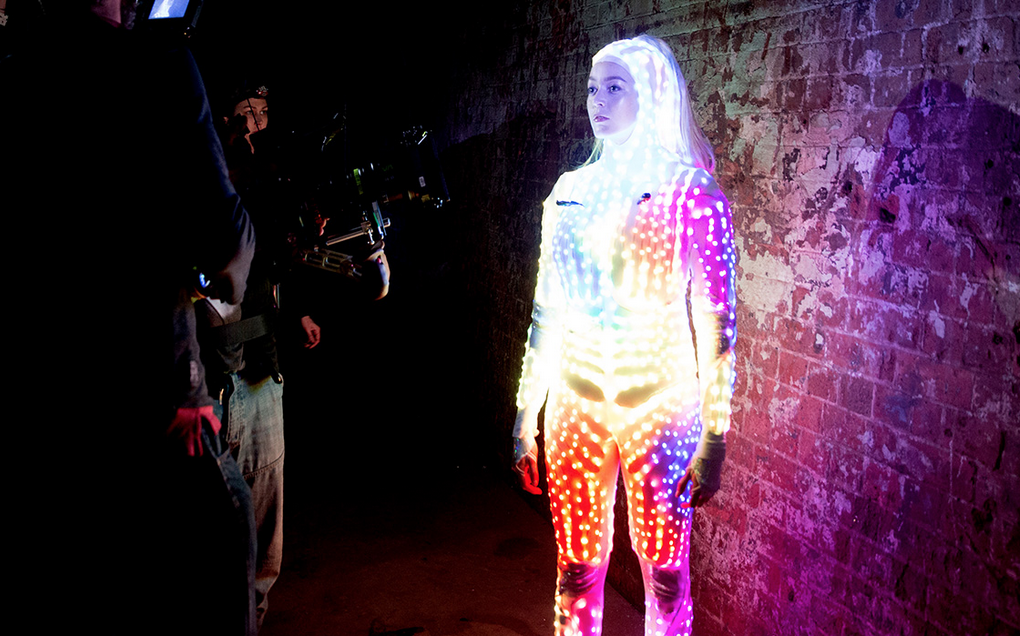 LBB> Tell us more about the suit.

ER> To achieve the highest possible “resolution” of lights on our athlete, close to 5,000 LED’s had to be hand-sewn into the two suits. The suits were then 3D scanned and each individual LED was given a unique identifier.

The suit itself needed to house microcomputers, be fully remote controlled via WIFI, and have enough batteries to power it through the night without slowing down the shoot. And, all this needed to be hidden in the contours of a tight-fitting lycra suit and be invisible to the audience!

We built two bespoke WIFI remote controls from scratch and many components were printed using our in-house 3D printer.

The idea heavily relied on showcasing our parkour athlete performing some pretty intensive physical manoeuvres and our LED suit needed to be durable, flexible and lightweight. The LED lights needed to be bright and powerful enough to self-illuminate the dark night backdrop. 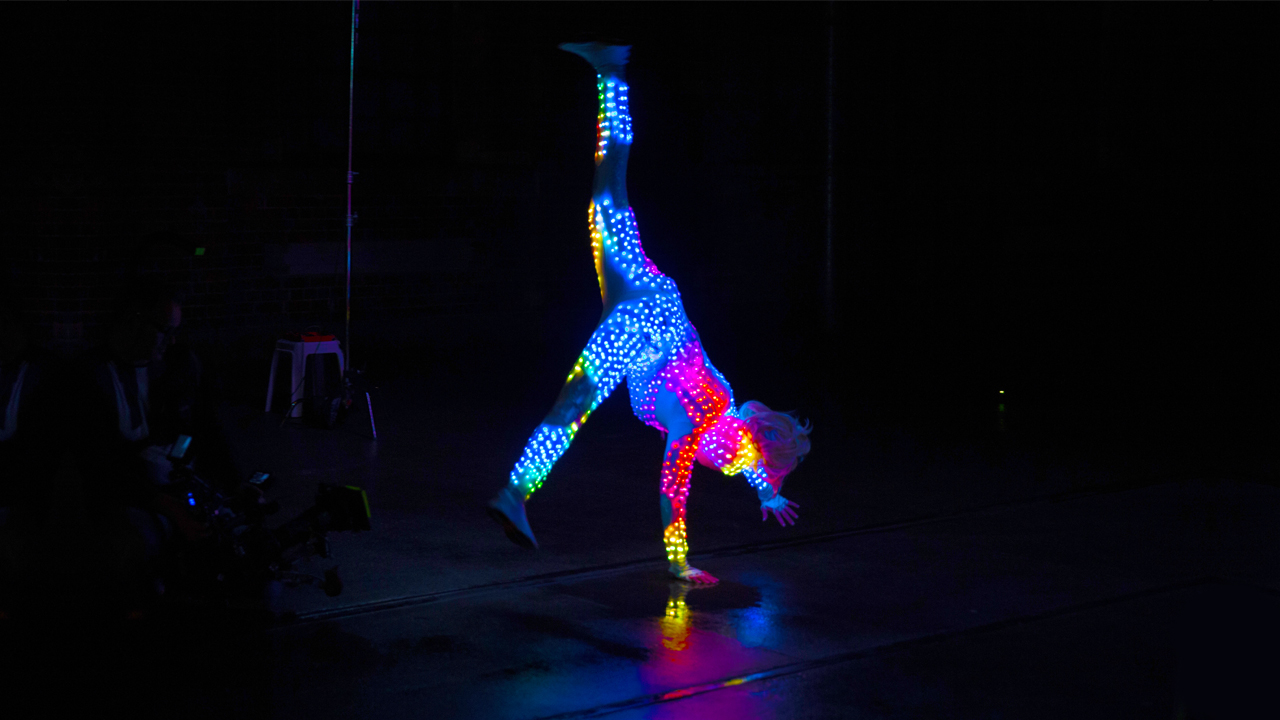 LBB> How does the technology work and what were the challenges along the way?

ER> Andreas Wanda took care of the technology in the light suit and engaged a light suit specialist as our advisor. The light suits this advisor had made in the past only had 200-300 lights on them and were primarily designed for stage routines. We needed to build something much more innovative and robust that could cope with hundreds of lights as well as the stresses of a parkour athlete.

In terms of the actual LEDs, we were interested in lights that could be programmed to emit any colour. The off-the-shelf, pre-manufactured strips of LEDs come mounted on a thin partially flexible plastic circuit board that has a tendency to snap after several bends. We managed to source LEDs that came pre-configured in strips of a hundred connected by flexible wire. Up until that point, we were calculating how long it would take to solder three wires between each LED multiplied by 5000 (for two suits)! Crazy! So, we were lucky to have found the correct hardware. The LED strips had to be hand stitched onto the tailored cat suit and had to be placed in such a way that they didn't tear at the joints or restrict our stunt girls’ parkour movements.

To control the thousands of lights there was again no off-the-shelf solution available. LED controllers are available but they're bulky and didn't have the flexibility to add the features we wanted. For example, the ability to trigger an animated splash of light during key moments in our commercial. From the ground up we designed, engineered the circuits, programmed, and assembled our own microcontrollers in-house at FSM. We even printed the buttons of the controller on our own 3D printer!

The controllers held a series of our animations, stored on an SD card that the microcontroller could send to the LEDs on the suit wirelessly. The patterns of light animated and with the addition of our custom built wireless remote control; various patterns and bursts of light could be triggered during different stages of filming. 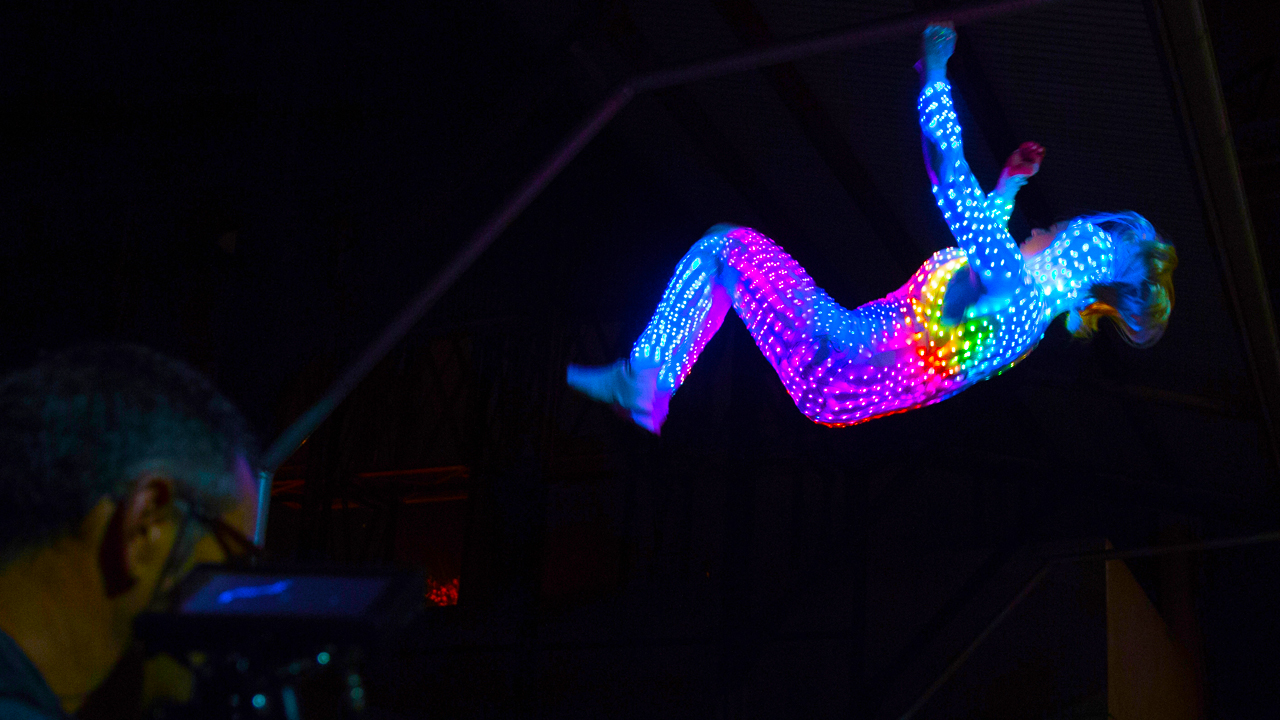 LBB> What was the agency creative team’s initial reaction to the treatment and did they buy into the idea from the start?

ER> Both the client and agency creative team (Lisa O’Neill and Lindsei Barros) loved the idea from the very start and immediately saw the future campaign opportunities the LED light suit could bring to their brand. We were pleasantly surprised by the overwhelming support of our idea! We usually have to “sell in” our idea, but they were immediately on board and loved it. The looks on their faces when they saw the LED suit light up for the first time was genuine amazement – they were speechless!

LBB> How long did the shoot take? What locations did you film in?

ER> We shot over one night as well as doing a test night shoot prior to that. Carriageworks in the inner western suburbs of Sydney was the perfect urban location to compliment the suit and the handheld style of the filming. Our camera of choice was the Sony FS7, which handled the dark environment well. Phil Meatchem took care of the live action direction on the night. 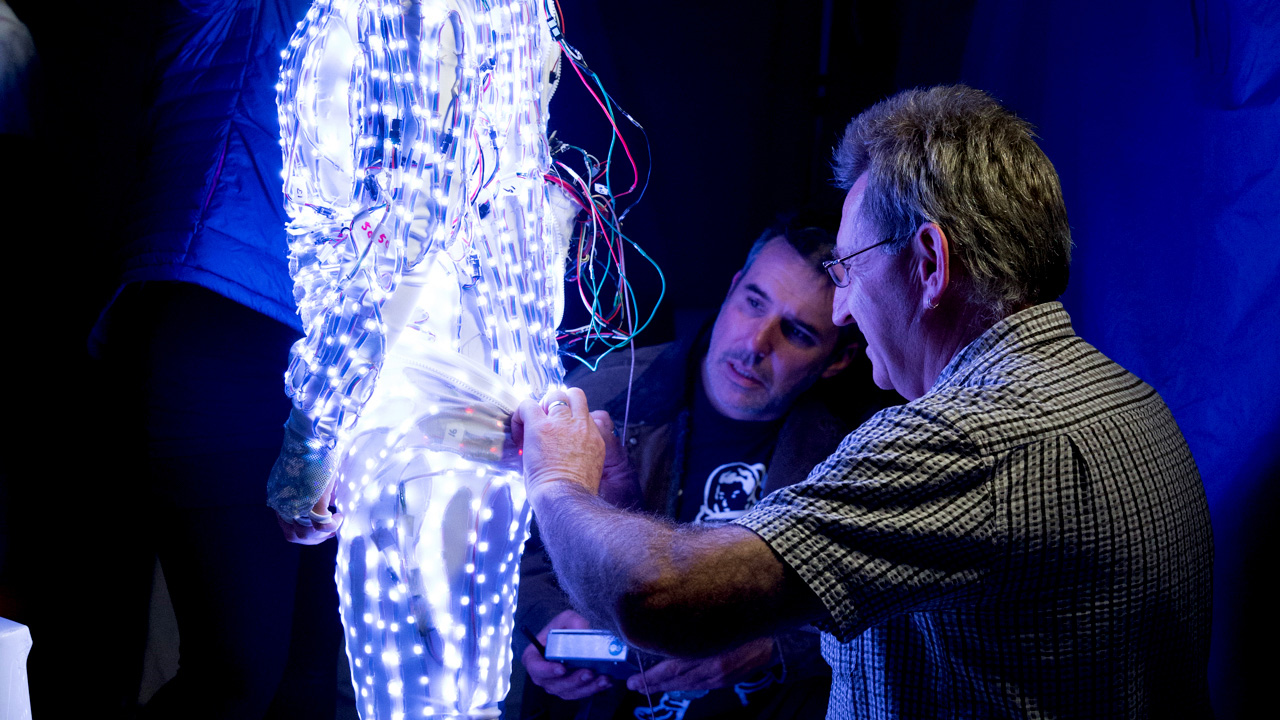 LBB> What unexpected highlights or challenges did you come up against on the shoot?

As a precaution, we created two complete LED suits. Although we made a backup suit we didn't end up needing it. Both suits were rigorously tested and ready for the shoot.

On the day of the shoot, our LED suit was virtually flawless. We were never offline for more than a few minutes and were able to shoot throughout the night. This allowed us to focus on the creative, rather than being hindered by the technology.

LBB> It’s unusual for a brand mark to actually live on a real, moving person. Was the client nervous or excited by this? 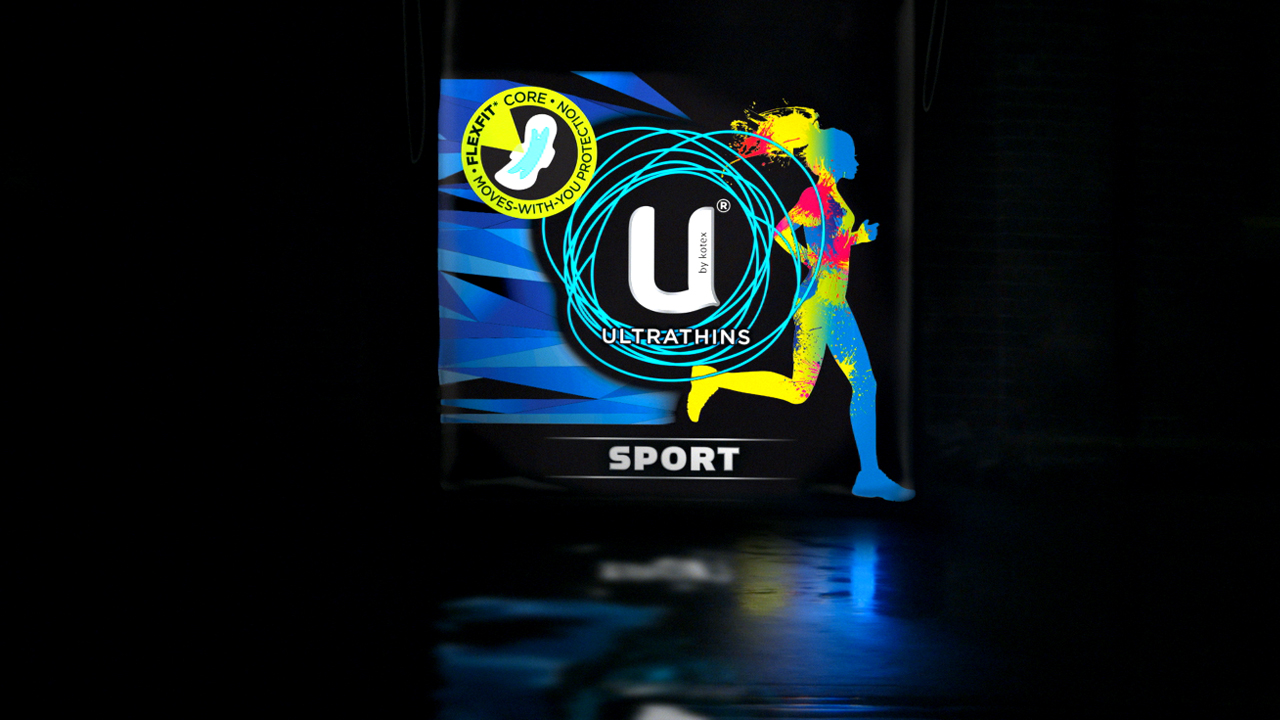