Your Shot: Droga5 on Hitting The Highest Heights & Deepest Depths for Hennessy

Behind the Work 541 Add to collection 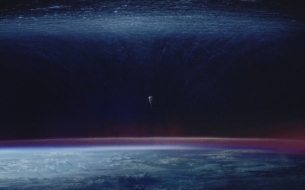 In 1931, Swiss physicist Auguste Piccard became the first person to reach the stratosphere. In 1960, his son Jacques became the first person to reach the deepest part of the world’s ocean. That’s the amazing true story Droga5 has based its latest film for Hennessy on. In line with the brand’s Wild Rabbit campaign, which celebrates incredible people in their respective fields, ‘The Piccards’ is an otherworldly, cinematic, abstract film that’s been brought to life by the eye of director Daniel Wolfe of Somesuch.

LBB> How does the story of the Piccard family fit within the wider ‘Wild Rabbit’ campaign?

Droga5> Since its inception the ‘Wild Rabbit’ campaign has always featured incredible people who achieve mastery and then go beyond. People like Manny Pacquiao, who won seven world titles as a boxer before becoming a congressman, or hip hop icon Nas, or the speed racer Malcolm Campbell for instance. With ‘The Piccards’ it’s the first time we’ve been able to go beyond the individual story and start to explore ambition being carried down through bloodlines and across generations. In that sense, it’s an evolution of the campaign.

LBB> I imagine the research period was fascinating. What did it entail? Were there any pieces of information that particularly piqued your interest?

Droga5> Researching was a lot of fun. First we discovered Auguste Piccard by looking up altitude records and the more we poked around his story the more incredible it became. We learned that he explored the deep sea, that his son Jacques became the first to reach the bottom of the Mariana trench, even his grandson Bertrand Piccard was setting records. Pretty soon all the other stories we had been considering seemed small. The Piccards were it.

LBB> Despite their feats, at the heart of these films is the bond between father and son. How did you immerse yourself within the relationship between the Piccards?

Droga5> We turned over everything we could. We read books, old magazines and newspaper excerpts. We watched video clips. What helped most was meeting Jacques’ son, Bertrand Piccard and learning more about the family through him. Just speaking with him you got a better sense of the men his father and grandfather were.

LBB> The films are incredibly cinematic but at the same time really abstract. Why was this approach right to bring the story to life? How tricky was it for you and director Daniel Wolfe to strike that balance?

Droga5> We knew we’d be taking viewers to the stratosphere, into space and to the deepest point of the ocean, but we didn’t want the film to feel cold. Daniel understood that right away and he recognised how important it was to bring out the humanity of the men in the capsules, including the indescribable emotions they must have felt. This led us to the abstractions. Plus, we were dealing with big themes that sometimes can’t be scratched at any other way. Everyone understood that from the onset and worked hard to keep a few things up to interpretation.

LBB> I understand that the production design was especially extensive for this project. Can you tell us more about it? Who did you work with and what did it entail?

Droga5> We worked closely with our director Daniel who had an amazing team building sets and models weeks prior to the shoot.

Auguste Piccard basically reached the stratosphere in a tin can and the only way to give off the fragility and claustrophobia of his situation was to recreate his capsule. The same goes for Jacques and his submersible. He was seven miles beneath the ocean, cramped in this little tiny pod with hardly a window. So to give the truest sense of what they went through and make it feel real, we built full scale models for the interior shots which took about a month to build.

For the exterior actions shots, we used scale models. These were meticulously researched and built to match the vessels each Piccard used. This level of accuracy was important to show just how ground-breaking and unthinkable these achievements were at the time.

LBB> The whole thing is captured on 35mm film. What was the ambition for shooting in that way and how was it for you, as a creative, to do so?

Droga5> It really goes back to our director. Daniel’s films all have this amazing style and quality to them. There’s an added texture with film that makes shots feel graphic and cinematic but at the same time, it puts you in the middle of the action. We knew we wanted that with this film, so when Daniel proposed shooting on 35mm we were all for it.

LBB> Why was Daniel the perfect director to bring such a story to fruition?

Droga5> Daniel’s treatment for the film blew us away. He’s one of the most exciting directors out there and everything he brought to the table proved that. From the research phase to the final colour grade he was genius. With him we knew the film would be unlike anything else, even with all the space films that have made waves recently. We knew ours would be powerful, visceral, emotional, abstract, everything we wanted.

LBB> Photographer Chris Parks was also involved ­ what did he bring to the final production that couldn’t have been achieved without him?

Droga5> For us, it was always crucial that we make a seamless transition between the two journeys. There were thirty years and an unimaginable physical distance between the achievements of Auguste and Jacques, but we needed to bring them together in one moment. This was where Chris Parks’ photography came in. The effects and textures he achieved helped us visualise the abstract transcendental nature of the sequence.

There was really no better way to express the passage of this explorer spirit stretching across time and space. This was the real purpose of the abstract imagery and Chris did an exceptional job with it.

LBB> What were your most memorable moments from this project?

Droga5> It was a pretty great feeling getting to watch it in 4K on the big screen.

Droga5> It’s a complex visual story. Throughout the project we had to make sure the story was clear and that we were effectively communicating the continuous upward journey. Our VFX partners at the Mill deserve a world of credit for helping us get there.

Music was another a big hurdle. Scoring such a visually complex, action­-packed sequence requires a lot of little things like making sure the music guides the narrative and does the right thing in the right places. Then you consider all the important sound effects you have to work in and it becomes even tougher. The team really didn’t solve it until the final week of the project. We tried everything, but once we found a track, we all knew it. Phil Kay’s composition had drive, emotion and a sense that we were going deeper into the journey. We were sold.