Behind the Work 316 Add to collection 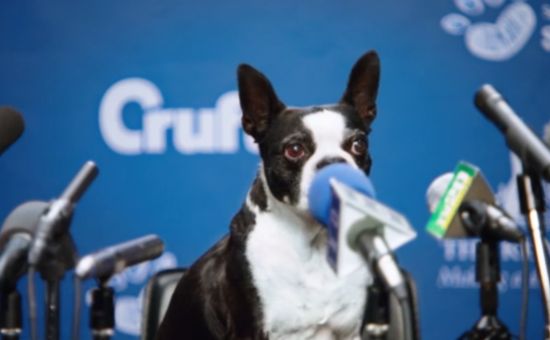 Directing petulant actors is one thing. Handling haphazard dogs is another. But, as director Henry Littlechild explains, it’s all about being patient and waiting for the perfect little moments. And that’s not easy. Shot through Station Film via R/GA, the director has captured a select group of Crufts ‘champions’ for a new Samsung spot (they are in fact specially trained doggy actors). In the ad, canine super stars give a press conference on their victorious triumphs, complete with super smart copy, witty humour and animal silliness. LBB’s Addison Capper chatted with Henry to find out more.

(Disclaimer: No dogs were poisoned in the making of this interview.)

LBB> What were you thinking when the initial brief came into you? Why did it appeal to you?

HL> It made me laugh! The fact that it was shooting in LA was also a bonus.

LBB> How was it working with so many dogs?

HL> I’ve shot lots with animals so felt pretty confident. We shot the dogs separately, so it was patience that was required more than anything.

LBB> Did you write the script and dogs’ names and nationalities prior to shooting? Or did you shoot and then adapt the script to their mouth movements?

HL>  A bit of both. We had firm ideas, but knew the script would change depending on the dogs we could get and how well they performed on the shoot.

LBB> So how did you actually coax these performances out of the animals? How much ‘direction’ really went on?

HL> We relied heavily on the animal trainers, who were amazing. They listened to us, then got the performances from the dogs. The key was picking dogs that we knew could perform the mouth movement.

LBB> How do you have to adapt to a shoot like this?

HL> Hold your nerve. Most of what you shoot is unusable, and you have to patiently wait for those little moments. This sounds easier than it is.

LBB> Which canine was the best behaved? And which was the worst?

HL> We actually wanted a bit of misbehaviour. Although you need the dogs to perform, we also wanted to capture and use the more unplanned and unscripted instances.

LBB> Did you make any friends for life on set? Who was your favourite?

HL> It’s always the catering person for me. I had a soft spot for Fritz as well.

HL> It wasn’t so tricky, as most of the work is done beforehand and so the shoot is fairly simple. The key was looking at lots of dogs and choosing the right ones. They then went to doggy boot camp to practice as much as possible before the shoot.

HL> It’s all a blur already.