Your Shot: Deutsch Gets Baking Mad with Gingerbread Bank for PNC

Behind the Work 386 Add to collection 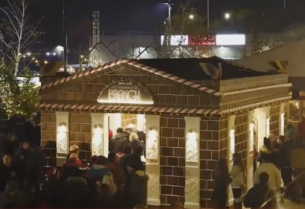 Every year PNC Bank releases its annual Christmas Price Index, which mimics the Consumer Price Index of each Christmas gift from The 12 Days of Christmas to give kids an insight into the global economy. Deutsch Inc brings the initiative to life with an annual launch, with a combination of smart technology and classic Festive cheer. Past iterations have included a dozen YouTube films, 3D printed lyrics and a Google Streetview Treasure Hunt.

This year though, Deutsch has opted to slightly eschew a digitally-led approach for a spice-heavy, sugar-loaded, experiential extravaganza. They constructed a fully functioning PNC Bank branch made from gingerbread.  Freakin’ gingerbread! (And if you want to get a taste of what it was like, check out this 360 video).

LBB> What inspired the idea? Was it a bit of a light bulb moment? How mad did it sound when it was first pitched?

Alex Avis and Justin Lee> We realized early on that the Christmas Price Index (CPI) is no ordinary report, it's this unique embodiment of the holiday spirit. We actually joked about it being handled by PNC’s North Pole office. But that got us thinking: if PNC did have a separate bank branch that handled the Christmas Price Index, what would it look like? Well, we knew it would definitely be gingerbread. And that sparked the idea – we’ll build the ultimate holiday–themed bank to celebrate the ultimate holiday–themed economic report.”

Jeremy Bernstein> This year was a bit unusual in that the concept came out very early, in the first meeting we had to look at ideas. It definitely sounded a bit mad, which is what we loved about it, and it immediately struck us as something that people would really respond to. When we first discussed it, we knew we needed to do whatever we could to make it happen. It turned out to be quite a bit more challenging than we had imagined, particularly once we decided it would live outside, exposed to the elements. So I guess we didn’t realise quite how crazy the idea really was until we started to talk through it with fabrication experts.

LBB> In the past your different iterations of the 12 Days have been quite digitally led, whereas this is more experiential. How come you made the change?

JB> We’ve worked on this project for several years now and try to find a new way to look at it each year. We made a conscious effort to explore a range of ideas and find the best one rather than limit ourselves to something that lived exclusively online.  We’ve done some really interesting digital experiences in the past, so a real-world experience seemed like a natural evolution of the campaign. One of the things we liked about this idea is that it would be great for those who could visit in person, but could also generate interesting content and experiences that could live online for all to see. We created a ‘Baking Of’ film that shows how we managed to design and build the branch and the augmented reality tour lets anyone imagine themselves inside the branch just by visiting the site on their phone or tablet – no app download necessary.

LBB? Can you tell us a bit about the gingerbread bank? Where was it and how long was it up?

JB> The Gingerbread Branch was built at Penn’s Landing in Philadelphia. It was open for three days and was visited by nearly 5,000 people. Because it was built with real gingerbread tiles inside and out, we knew it would have a limited shelf life. We even caught a few people trying to take a bite out of it in spite of signs (thanks to our legal team) strongly encouraging them to resist.

LBB> What kind of research did you have to undertake to really get to grips with the project and its feasibility? Who did you work with on the structural side of things? What acted as the cement?

JB> We partnered with the great team at Design Compendium on the fabrication of the branch and worked closely with them to understand what was and was not possible with real gingerbread. We also worked with bakers from Bredenbeck’s Bakery in Philadelphia to come up with a recipe that would be as dense and stable as possible. We knew the exterior surfaces would be the trickiest, so we tried a variety of varnishes and treatments to protect the gingerbread. We left samples outside for weeks at a time to see how they would cope with the weather before locking in on our recipe and weather-proofing solution.

Another tricky part was keeping the 9” x 12” gingerbread tiles adhered to the walls, knowing that any kind of screws or nails would shatter the cookie. We used an ‘H’ track nailed to the wall to create a channel that the gingerbread tiles slid into, keeping them safely attached. Finally, we knew that real frosting or icing would quickly deteriorate if we had rain or snow, so we used white silicone caulk for frosting, applying it the same way a pastry artist would if it were frosting.

LBB> And how about on the actual bake? How did you find the right people for the job? What was their reaction like when you first approached them?

JB> Bredenbeck’s Bakery was an obvious choice. They thought it was a bit nuts, but they were extremely excited about the project. Unlike other bakers we approached, they weren’t daunted by the incredible volume of gingerbread we needed (2.5 tons!).

They were willing and able to problem solve with us, from adjusting the recipe to creating a giant custom cookie cutter to ensure all the tiles were all uniform. They also worked closely with us on the beautiful icing illustrations for each of the gifts from ‘The Twelve Days of Christmas’. They found a way to thin out and colour silicone caulk to match the art deco illustrations created by super-talented Deutsch Designer, Lynne Yun.

LBB> Where did you draw inspiration for the design and architecture?

JB> We felt strongly that the branch read as a bank, not a gingerbread house. Our design team geeked out on a ton of architectural and design references and honed in on an Art Deco style. Today’s banks are mostly boring boxes, so they looked at great banks from earlier eras like the Williamsburg Savings Bank in Brooklyn. They also drew inspiration from other great Art Deco buildings like the Met Life Building, Rockefeller Center and the Chrysler Building.

We created custom illustrations of each of the 12 gifts from ‘The Twelve Days of Christmas’ for the 12 columns, also in an Art Deco style. The columns were inspired by frescos found at 30 Rock. We also threw in a dose of Willy Wonka to keep it fun, from oversized peppermint ball chandeliers to giant gumdrop ornamentation on the branch’s ATM.

LBB> Were there many hair-raising moments during the build we should know about?

JB> Sure enough, when it came time to build the branch, it rained for three days straight. Thankfully, we were prepared and even though the rain definitely set us back, the branch was ready to open as planned (with a few hours to spare). As with anything that has never been done before, you never know exactly what’s going to happen. The fabrication team on this was incredible and worked around the clock and performed a true holiday miracle on this. By the end of it, we were all exhausted and covered with gold glitter – a key ingredient of the bank architecture details on the interior of the branch.

JB> I think the research section above covers this nicely. In the end, gingerbread is not a great building material nor is it weatherproof. The same is true for icing. We knew the idea didn’t work if the gingerbread wasn’t real, so we focused all our energies on finding a way to make it work.

JB> Building the branch was a pretty remarkable experience and created many memories that I think will stay with me for many years. While the smell was incredible, the most memorable aspect was probably seeing the wonder and awe on people’s faces, especially kids. We see fantastic things all the time on our screens and devices, but standing inside a building made out of cookies seemed to make a unique impact on people. It was great not only to have that experience, but watch thousands of others experience it, too.