Behind the Work 385 Add to collection 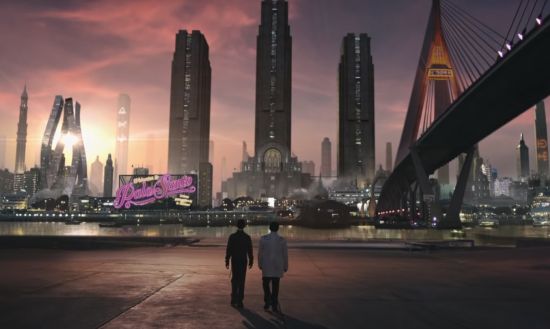 Much more than a collection of electro-pop hits, Years & Years’ new album Palo Santo is a work immersed in a sci-fi dystopia of the same name - a world where android dominance has virtually eradicated all notions of gender and sexuality.

To coincide with the album’s release, the band got together with long-time collaborator Fred Rowson. With the Blink Productions director, they created a 15-minute short film to serve as a music video for not one, but two of the album’s tracks.

The film is set in Palo Santo itself, where the few remaining humans in a world of androids are forced to perform every night for their robot masters. Starring Judi Dench as an omniscient AI overseer, Ben Whishaw in a cameo performance, Thai actor Vithaya Pansringarm and Years & Years frontman Olly Alexander, the film is a visual feast of queer sexuality, brutal futurist settings and glittering cabaret.

LBB’s Alex Reeves spoke to Fred about the process of building this unique universe.

LBB> Olly had the idea of the Palo Santo world before he started writing the album. What was the idea like when he came to you?

FR> When we first spoke, it was a PDF - Olly is very good at creating seductive PDFs - which described a futuristic world, in which the idea of gender had been forgotten, and society was based around entertainment. So, in that sense, it was pretty close to what we ended up with, but he and I were both intent on filling in a lot of the details in this fictional universe, to make it feel coherent and real. So there was a lot of work - including introducing the idea of AI and android overlords - which followed on from that initial document.

LBB> How did you build the world together? What was your process?

FR> Over about a year, we sent ideas back and forth. I have a big library of images from films, paintings and photography, and I'd make selections from that and send them over to Olly to see what he liked. When the prospect of making the video became more real, we had a lot of meetings - maybe one or two a week, for a couple of months - where we'd throw ideas around, I'd make a lot of notes, and then go away and write drafts, which Olly would feed back on. The main part of our discussion was about emotion; what had begun as a visual conversation quickly became 'how do we want people to feel when they're watching this?'

LBB> What were the most enjoyable parts of coming up with the idea? Olly said in an interview that he really enjoyed the process.

FR> The freedom to be wrong about things! So often in music videos - and, to a lesser extent, ads - you only get one chance to get your idea in, and if it's wrong then it's 'game over'. Olly and I said from the start that nothing was too stupid to consider, and we threw out some really mad concepts before we got to where we ended up. At the same time, though, it feels like the germ of the madness remained, so even if some of the ideas are fairly classic sci-fi, I hope that the atmosphere feels at least a little unpredictable and uncomfortable.

LBB> What were your visual references? There are heaps of familiar sci-fi tropes in there.

Our big references were fairly eclectic - and often tonal as much as visual - I like to describe the film as a mixture of Showgirls (probably our main reference) meets Twin Peaks, meets the Muppet Show (in the way of being on stage and off stage again, and seeing the dramas that play out behind the scenes). Personally, I went back to the French comic book artist Moebius a lot, as well as the films of Nicolas Winding Refn, for the way that he builds tension in a scene. And, of course, the opening of Indiana Jones and the Temple of Doom, for some of the dance sequences.

LBB> There isn't a lot of LGBTQ+ representation in sci-fi as a movie genre. Is that something you consciously felt needs correcting or was it just a natural decision? The line about gender not being a concept the android recognises is an interesting one...

FR> It felt natural. We were very keen for the LGBTQ+ representation to be a seamless part of the story and the world, not oversold as a 'message'. I feel like that's the way of the future, in terms of finding the balance of representation that the film and entertainment world needs. The idea of androids not understanding the concept of gender came from Olly, and it very definitely feeds back into that core idea of 'what does a world look like in which gender is unimportant?'

LBB> Dame Judi Dench, Vithaya Pansringarm and Ben Whishaw. That's quite a cast! How did you get them involved and why were they right for the roles?

FR> In various different ways! Ben Whishaw appeared in Years & Years' first video, so we'd always thought it'd be cool to get him back for a cameo. Judi Dench is an old friend of Olly's from when he appeared in a play with both her and Ben Whishaw. For a long time, we'd thought about there being public service announcements playing on loudspeakers around this futuristic city... once we'd settled on the idea that this voice would be like a fairy godmother, then Olly wrote Judi a letter, and she was immediately keen. Vithaya was different: I'd written a role for 'The Showman' - Olly's android agent and handler, who is sort of our introduction into this world. We talked about a lot of actors for the role but, for me, Vithaya - or, if we were lucky, an actor with his kind of presence - was the person I'd pictured in my head when I was writing the film. Even before we'd confirmed that we were going to Thailand, I was seeing The Showman as Vithaya. I was over the moon when I found out that he was not only available, but keen. It feels like, sometimes, you have to just insist to yourself that things are going to turn out a certain way, and then they do...

FR> All amazing - and all ridiculously happy to be part of this world we were creating. Judi Dench insisted on being properly directed, and was adamant that she didn't just want to phone it in. It felt like an amazing dream giving her direction and having her respond to it. Vithaya was also lovely. He is a big actor in Thailand and, as in Only God Forgives, he plays a lot of scary characters - bent cops, murderers, a cult leader. He turned out to be one of the nicest, most patient and reliable actors I've worked with.

LBB> What was the shooting process like? Where did you do it and what were the big challenges?

FR> We shot in Thailand, and the process was intense, but a lot of fun. They have a thriving industry out there, and the crew was razor-sharp, as were my collaborators - like DoP Jaime Feliu-Torres - that came over from the UK. We worked a lot of very long hours - a 26-hour tech recce spread over two days - and shot the whole thing over four days. In that sense, the challenge was staying on schedule and not getting defeated by the heat. Boringly, though, there weren't any moments where it went particularly wrong...

LBB> I heard you had a run in with a snake while shooting in Thailand! What happened there?

FR> ...apart from the snake. Hazards of the job? It emerged directly above the camera - as snakes often do, apparently - and shut down our shoot for half an hour whilst we got the snake guy in. My only regret is not getting a serpentine cutaway. We tried to, but we were on the wrong sized lens...