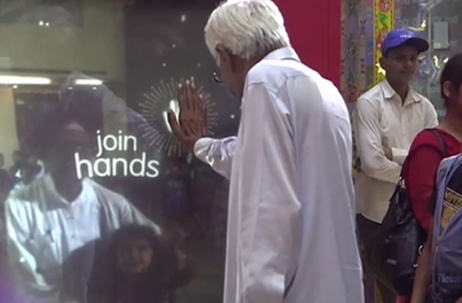 In 1971 Coca-Cola announced ‘I’d like to teach the world to sing’. Over forty years later they’re still sharing the love – this time by encouraging the people of India and Pakistan to overcome their differences. Small World Machines is an initiative created by Leo Burnett Sydney and Chicago – thanks to clever technological trickery and a bit slice of ambition they managed to turn vending machines into portals between the neighbouring nations. Addison Capper spoke to Leo Burnett Sydney CCO, Andy DiLallo, about working around some pretty scary security issues and uniting the countries with 10,000 cans of Coca-Cola.

LBB> What was the original brief from the client like and what were your initial thoughts when you saw it?

AD> The Small World Machines initiative is a global project between Leo Burnett Sydney and Chicago and, of course, Coca-Cola. It all started with a global brief by Coca-Cola to the Leo Burnett network to create new, openhearted ways for people to come together while highlighting the power of happiness.

When we first started working on the brief, at the forefront of our minds was the fact that Coca-Cola is at its best when it celebrates and provokes happiness through humanity. Coca-Cola has a long history of sharing and spreading happiness and we wanted to do something that would bring to life the brand’s belief in a real and tangible way.

LBB> We're intrigued as to which came first – the idea and technology, or the desire to do something to help unite India and Pakistan?

AD> The idea for Small World Machines came out of the brief to look for innovative ways to break down barriers and provide another expression of happiness on a global scale. Simply, it was a unique portal that could simultaneously join two countries that had been divided by a history of tension. Once we had refined creative and technology approach, India and Pakistan became a natural pairing for our first activation.

LBB> What was the reaction like from the Indian and Pakistani public?

AD> There was just a level of genuine joy and awe once the Small World Machines were activated. Seeing a little kid run up to the machine and try to high-five it is just one of many memories of the experience.

We’ve only received very positive responses from everyone who has interacted with the activation and it evoked a lot of heartwarming and emotional reactions.

From the people who actually took part in Pakistan and Indian, some of the comments that stick in my mind are:
“It’s great to connect with the average Indian, who probably knows nothing about the average Pakistani.”
“It’s something to really bring the countries together.”
“It’s fantastic that you’re allowing people to see the other side as well, to not let it be a mystery anymore.”

During the three-day experience, more than 10,000 cans of Coca-Cola were given away – to be able to take two countries that have been divided, unite them through the world's most iconic brand and see the purity of the experience was amazing.

LBB> Did you have any concerns with getting involved in such a politically sensitive issue? If so, what was the client's response to these concerns?

AD> The basic idea of Small World Machines is to spread the message of peace through this ‘moment of happiness’ between two nations at odds, so Coca-Cola deliberately – and courageously – chose to bring together people from Pakistan and India. They are two nations with strained relations – by providing them with a live portal of communication, they showed us that what unites them is stronger than what sets them apart.

LBB> This campaign is an incredible statement of Coca-Cola's potential to make a difference - what do you feel 'Small World Machines' will achieve for the brand?

AD> For more than 125 years, Coca-Cola has been sharing happiness across the globe – I think the significance of this project transcends being only attached to this year. Instead, the real significance of it has more to do with the journey the company has been on to get to this point.

The brand has now demonstrated that they are willing to live up to the courage of their convictions by attempting something of this nature. Their demonstration of strength and confidence in who they are as a brand is a very rare and powerful thing in this business. I believe that Small World Machines highlights the positive role in society that a brand can play.

LBB> The project took a year to fully concept - what were the key challenges you faced and how did you overcome them?

AD> What's been the hardest part of this project? Every element of it to be honest, starting from getting the idea sold and brought through all channels. Then there was the challenge of finding a partner who could create technology that didn't exist and help us tell our story; of making the early prototypes work; of figuring out design; and of engineering obstacles so that we could have an authentic 1:1 connection in a live simulcast. On top of all of that we had to get into Pakistan, through customs, with limited bandwidth and security concerns.

Working within the infrastructure of two developing nations also provided its own unique obstacles, to the point that we were actually forced to leave the first time for security reasons. We regrouped and tried again. Logistically, we had to coordinate two offices inside the Leo Burnett network and another four offices inside the Coca-Cola network, as well as several key suppliers. We dealt with time differences, language barriers, and cultural sensitivities. I can't really pick out one thing that was the greatest challenge, but this was certainly the hardest thing I have ever had to do. We pulled it off, though, and that's what matters.